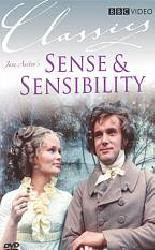 I have been waiting for this film to become available on DVD for a long time, hoping to include it in my Sense and Sensibility cast mash up, which I plan to post this weekend (check out my similar treatments of Mansfield Park, Emma, Pride and Prejudice, and Persuasion). While I found it a lovely adaptation in its own right, none of the performances displaced the actors I already preferred in each role, leaving the 1971 BBC production of Sense and Sensibility totally unrepresented in my dream casting. However, having long anticipated watching this film and, of course, having an opinion on it, I decided to devote a post to it, thereby allowing me to share some of the highlights of the production with you, my always-hungry-for-Austen-adaptations readers. If you have no tolerance for other BBC productions of this era, there is no reason to believe that you will find this miniseries any more to your liking than Emma 1972 or Persuasion 1971. I, on the other hand, who am rather enamored of the style, found it a thoroughly enjoyable film and, in quality, rather more high budget than its contemporaries. One delightful surprise was recognizing Joanna David (below right), the actress who plays Elinor Dashwood, from another beloved Austen adaptation. Do you recognize her? I'll tell you why she looks familiar at the end of the post.

This production sticks fairly close to the book, the absence of a Margaret Dashwood perhaps the biggest deviation. Lucy Steele, as portrayed by Francis Cuka, is incredibly malicious: far more so than any other actress has played her. She is positively vicious. On the other hand, Kay Gallie provides the most mild Fanny Dashwood imaginable, allowing the viewer's hatred to lay more squarely on the shoulders of John Dashwood (Milton Johns) than is typical. Mr. Johns helps incite our antipathy by being perfectly odious - his resolve to help his step-mother and sisters even weaker than it is in the book. Avariciousness defines his performance.

Mrs. Jennings, played by a rather young Patricia Routledge (well-known as Hyacinth on Keeping Up Appearances), is extremely jolly with a hint of melancholy (perhaps a manic tendency?) to render her more sympathetic than usual. Unfailingly kind, she is also fidgety and rambunctious, often repeating her mantra - "I do, above all things in this life, adore the company of lively and entertaining young people" - which almost becomes a lament by the end. The emphasis is on her loss of daughters to marriage, particularly apparent in a monologue she gives after saying goodbye to the Dashwoods at Cleveland. I found it a thoughtful development of what Austen only hints at in the text, and a strong explanation for some of Mrs. Jennings more emphatic behavior.

Another interesting performance was provided by Robin Ellis at Edward Ferrars. He has a slight stutter than ebbs when he is amongst the Dashwoods and increases when he is uncomfortable (like when Lucy is around). It's a rather obvious device, but Ms. Ellis does it well. I was particularly impressed during the scene in which Elinor tells him about the living at Delaford, altered here so that she visits his lodgings to convey the message (and she finds him dishabille), where his repressed passion is manfully displayed. I thought he did a fine job of portraying the heartache of Edward's predicament. 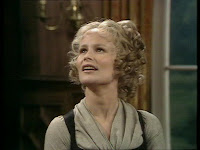 I began skeptical of Marianne, played by Ciaran Madden, because she looks extremely mature for seventeen, but the performance grew on me as she presented a highly passionate portrayal. It doesn't hurt that she's positively stunning. Her Marianne is an extremely spoiled child, very much in need of those worldly lessons her sister anticipates. In spite of her tendency towards tantrums, the eagerness with which she greets what interests her is infectious. We can well understand what Colonel Brandon sees in her. I must mention an odd scene at the end when she instructs him on the proper pronunciation of the name Cowper, and that her flight from ball where she encounters Willoughby was rather over the top, but overall it was a fine rendition of Austen's most self-absorbed heroine.
Now I return to the very lovely Joanna David, whose performance is the best in the film. She is a very stoic Elinor (in proper contract to Ms. Madden's exuberant Marianne), betraying none of the struggle with her emotions that other Elinors so depend upon until the very end, when the relief that Marianne is out of danger finally causes her to break down, though just for a moment. Other members of the cast fling the words "prudent" and "practical" at her almost like a taunt until Edward makes them terms of ardent affection in his proposal. Ms. David's Elinor endures all her trials like a champion, making her just reward all the sweeter at the end. And where do we know this fine lady from? Why, she is none other than Mrs. Gardiner from the 1995 production of Pride and Prejudice! How I love Austen synchronicity! 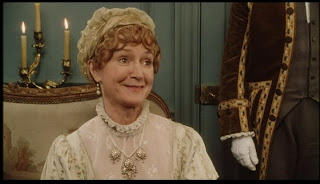