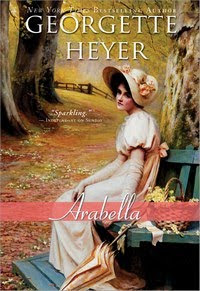 Those of you who have already read the wonderful interview Laurel Ann of Austenprose posted today with Vic of Jane Austen's World ("Why we love to read and reread Georgette Heyer") are aware that today is Georgette Heyer's birthday. In light of this event, and inspired by Kara Louise's wonderful review of Arabella last Saturday, I 'd like to add my own thoughts on this fabulous book, which I have enjoyed even more on the second perusal than I did on the first. Since Ms. Louise has already provided an overview of the book's plot (read it here), I am not going to bother with basic summary, instead indulging in some of the most memorable moments and morals of the book, celebrating Heyer's birth by emphasizing her incomparable flair for comic dialogue.

In Arabella, Heyer teaches us the importance of proper familial feelings. I love his adoring children's fine appreciation of Mr Tallant's benevolence:


'Bertram, I had rather by far he had beaten me!' said Arabella earnestly.


'Lord, yes!' agreed Bertram, shuddering. 'What a shocking thing! I'm glad I wasn't downstairs! It makes me feel like the devil when he gets to blaming himself. What did you say?'


'I could not utter a word! My voice was wholly suspended by tears, as you may imagine, and I was afraid that he would be vexed with me for not being able to contain my feelings better! But he was not. Only fancy! He took me in his arms, and kissed me, and said I was his dear, good daughter, and oh, Bertram, I'm not!'


'Well, you need not put yourself in a pucker for that,' recommended her matter-of-fact brother. 'He won't think it above a day or two. The thing is that his dejected fit is at an end.'


'Oh, yes! But it was much, much worse at breakfast! He would keep on talking to me about the London scheme - teasing me, you know, about the giddy life I should lead there, and saying that I must be sure to write very long letters home, even if I cannot get a frank for them, for he would be so much interested to hear of all my doings!'


Bertram stared at her in undisguised horror. 'He did not!'


'But he did! And in the kindest way, only with that sad look in his eyes - you know! until I was ready to give up the whole scheme!'


'Mo, and to crown all - as though I had not borne enough!' disclosed Arabella, hunting wildly for her handkerchief, 'he said I would want something pretty to wear in London, and he would have a pearl pin he wore when he was a young man made into a ring for me!'


This staggering intelligence made Bertram's jaw drop. After a moment's stupefaction he said resolutely: 'That settles it! I shan't come downstairs today after all. Ten to one, if he saw me he would blame himself for my frisk, and I should be driven into running away to enlist, or something, because, you know, a fellow can't stand that kind of thing!'


'No, indeed! I am sure all my pleasure has been quite cut-up!'

Furthermore, Heyer reminds us that persistence and loyalty have their rewards:


In pursuance of this resolve, Mr beaumaris sent for his curricle next morning. Ulysses, who had shared his breakfast, bundled ahead of him down the steps of his house, leaped into the curricle, and disposed himself on the passenger's seat with all the air of a dog born into the purple.


'No!' said Mr Beaumaris forcibly. Ulysses descended miserably from the curricle, and prostrated himself on the flag-way. 'Let me tell you, my friend,' said Mr Beaumaris, 'that I have a certain reputation to maintain, which your disreputable appearance would seriously jeopardize! Do not be alarmed! - I am not, alas, going out of your life for ever!' He climbed into the curricle, and said: 'You may stop grinning, Clayton, and let 'em go!'


'Yes, sir!' said his groom, obeying both these behests, and swinging himself expertly up on to the curricle as it passed him. After a minute or two, having twiced glanced over his shoulder, he ventured to inform Mr Beaumaris that the little dog was following him.


Mr Beaumaris uttered an oath, and reined in his reluctant pair. The faithful hound, plodding valiantly along, with heaving ribs, and several inches of tongue hanging from his parted jaws, came up with the curricle, and once more abased himself in the road. 'Damn you !' said Mr Beaumaris. 'I suppose you are capable of following me all the way to Wimbledon! It now remains to be seen whether my credit is good enough to enable me to carry you off. Get up!'

Ulysses was very much out of breath, but at these words he mustered up enough strength to scramble into the curricle once more. He wagged a grateful tail, climbed on to the seat beside Mr Beaumaris, and sat the panting blissfully. Mr Beaumaris read him a short lecture on the evils of blackmail, which sorely tried the self-control of his groom, discouraged him peremptorily from hurling a challenge at a mere pedestrian dog in the gutter, and proceeded on his way to Wimbledon.

Most importantly, in Arabella Heyer reaffirms the universally acknowledged truth that nothing is so likely to snare a man than a lady treating him with a hearty display of indifference:


Arabella approved so heartily of this arrangement, that he took the risk of saying in a melancholy tone: 'Yes, but if it succeeds, I shall be at a loss to think of a pretext for getting you to drive out with me.

'Dear me, have I shown myself so reluctant?' said Arabella, raising her eyebrows. 'I wonder why you will talk so absurdly, Mr Beaumaris? You may depend upon it that I shall take care to be seen every now and then in your company, for I cannot be so sure of my credit as to run the risk of having it said that the nonpareil has begun to find me a dead  bore!'

Continue to enjoy the Heyer celebration at Austenprose throughout the month!
Posted by Alexa Adams at 11:48 AM