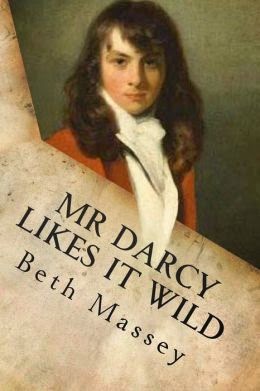 I imagine I heard a few deep gasps of shock and astonishment as I typed this post title, and before I proceed further, let me declare that I decided two months ago not to write any more negative book reviews. I have only good things to say about Mr. Darcy Likes It Wild, though I remember shuddering with revulsion when I first became aware of Beth Massey's name, following the publication of Goodly Creatures, her first book, and learning its premise. Like many others, Jane Austen's characters were not the forum within which I wished to explore the issue of rape, no matter how vital the conversation.

With so much Austenesque available, I rarely read outside my favorite authors in the genre anymore. The great exception are the books I pick up for free on Kindle. I hesitated before downloading this book even under those circumstances, but as I was about to be traveling it was hard to turn down a free read when it was on offer, even when I knew I'd encounter just the sort of sex scenes that make me most uncomfortable. Still, I never cracked the Kindle edition until Tuesday, when being stuck inside with my daughter during spring break finally left me desperate enough to brave the book I'd been avoiding since December. My worst prophesies seemed almost immediately realized when Mr. Darcy became enamored by the sight of a young man's backside. Maybe it was astonishment - a bit of devious glee at the horror of some if my cohorts in the no-sex-in-Austen camp - but I didn't turn my tablet off.

Austen's heroines are in a constant state of restriction based upon their gender. Imagine if all the societal dictates and norms beneath which they toil could be flaunted forever, and the 19th century morality from which they derived proved ridiculous and cruel: that's what this "diversion" is all about. Mr. Bennet, weakened by illness and frightened for his family's future, insists that Elizabeth marry Mr. Collins. She does the only reasonable thing by dressing like a young man and hightailing it to London (I read the foreword to the book after finishing it and was pleased to see Ms. Massey's accrediting Georgette Heyer's The Corinthian as inspiration, as I was often reminded of it during the text), asking Mr. Darcy to loan her the money for passage to Nova Scotia. Horrified at what might become her on such a journey, he convinces her to journey to Pemberley with him instead. What unfolds is really utter nonsense, but much in Heyer's style it is diverting nonsense: coincidental encounters at inns, Bow Street Runners, and highwaymen included. The plot resembles something like Austen herself once outlined in jest, but the crux of the novel - the exposure of gendered hypocrisy - is poignant.

Much Austenesque focuses upon Mr. Darcy's transformation into a worthy hero for our heroine. Mr. Darcy Like It Wild takes this to new heights, bringing the gentleman to a place where he is more than willing to risk not only his familial relationships, but also his reputation in order to protect Elizabeth, who before the novel is over has been "compromised" a thousand times over (excepting the technical way). The gender norms and expectations of not only a Regency audience, but also the modern reader, are again and again called into question. While I'm not sure I'll ever look to Austenesque for political and social commentary, Ms. Massey's use of the genre as a vehicle for her message is really rather beautifully done. It stands out amongst most of my recent reading for it's originality.
Posted by Alexa Adams at 4:16 PM