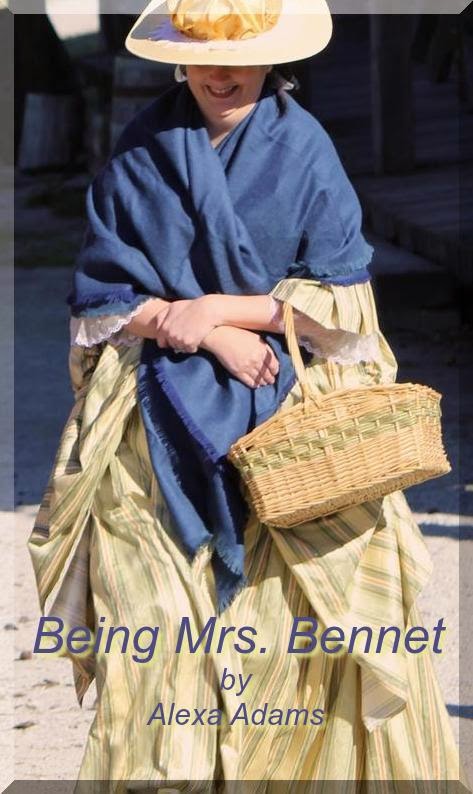 The time fixed for the beginning of Elizabeth's Northern tour with the Gardiners was fast approaching. In midst of all her turmoil, she clung to the expectation of traveling, even when Alison said she was not to go to the Lakes. Try as she might, Elizabeth could not extract any further information from the lady who only resembled her mother in appearance. Alison might be struggling to remember her true life, but her behavior remained what it had always been: sensible, efficient, thoughtful, and not at all akin to the real Mrs. Bennet's.

Elizabeth found she couldn't enjoy Alison's company as much as she did. She saw her family continue to flourish under her influence with mixed emotions, particularly in regards to her father. When the two ladies were alone, Elizabeth was incapable of speaking of anything but the progressing narrative that was her life, no matter how fictional it might appear to any other. She hounded Alison with questions and received only partial answers. The one thing she was fairly certain of was that her travel plans, though changed and curtailed, were not to be cancelled. In a vain struggle to alleviate her disappointment, Elizabeth abandoned the Lyrical Ballads, which she was in midst of reading, but no pragmatic resolution could ease the uncomfortable fluttering in her abdomen. Her circumstances were far too exceptional.

Finally Mrs. Gardiner's fateful letter arrived, at once delaying the planned holiday's commencement, curtailing its extent, confirming Alison's predictions, and dispersing any lingering doubts Elizabeth had regarding that lady's sanity. Mr. Gardiner would be prevented by business from setting out till a fortnight later in July, and must be in London again within a month; and as that left too short a period for them to go so far, and see so much as they had proposed. According to the present plan, they were to go no farther northward than Derbyshire.

With the mention of Derbyshire, there were many ideas connected. It was impossible for Elizabeth to see the word without thinking of Pemberley and its owner. "But surely," said she, "I may enter his county with impunity, and rob it of a few petrified spars without his perceiving me." Such reasoning seemed very well but for Alison's strange interest in and knowledge of Mr. Darcy. Elizabeth could only wonder if she had no choice but to see him and scanned through her letter once more for any mention of the place and locale.

The country afforded enough to be seen to occupy the chief of their three weeks, and to Mrs. Gardiner it had a peculiarly strong attraction. The town where she had formerly passed some years of her life, and where they were now to spend a few days, was probably as great an object of her curiosity as all the celebrated beauties of Matlock, Chatsworth, Dovedale, or the Peak. Elizabeth retreated to her father's library to procure a travel atlas and looked about until she located Lambton, With a sinking heart, though she could not claim surprise, she noted her aunt's hometown's proximity to Mr. Darcy's estate.

Carrying the book with her as evidence, she found Alison strolling through the wilderness alone, having just parted from Jane, Kitty, and Lydia at the palings, those two ladies bound for Meryton.

"Mama!' Elizabeth heralded her, for no matter how odd it often seemed, she could not help but call Alison by the title. "I received the letter from Aunt Gardiner changing our travel plans."

Though Alison now sometimes had to be reminded she had another life, her knowledge of Pride & Prejudice never seemed to diminish. She nodded knowingly, "Yes. I told you it would."

"But you did not tell me we would be bound for Derbyshire, and to a town not five miles distant from Pemberley!"

"No. I did not think it worth while to alarm you sooner than necessary. You are alarmed, are you not?"

"Of course I am! Only imagine how it must look to him - as if I were putting myself in his way on purpose."

"I assure you he would be thrilled were that the case."

"After insulting him so mercilessly? There cannot be a person in the world he is less inclined to encounter." Alison didn't reply, and Elizabeth was left to pursue her thoughts. "Perhaps the family is not in residence."

"You mean they will return?"

"Please, ma'am! Stop speaking in riddles and hints. It is torturous. I want to know what I might expect on this holiday."

"I fear if I tell you, you will intentionally thwart what ought to happen."

"To be honestly, I am not entire positive, but now that Lydia is safe I strongly suspect that Mr. Darcy will renew his proposal to you."

Elizabeth was flabbergasted. "What man in his right mind would possibly do so after such an emphatic rejection?"

"One who is deeply in love and receives encouragement to hope."

"Yes, from you Elizabeth. Has not your opinion of him changed already? When you see him again, at ease in his own home, and obviously heeding your criticism of his previous hauteur, do you not think you might be swayed in his direction?"

Elizabeth looked extremely skeptical. "I do not see how such a revolution in my feelings could occur. My opinion might improve, but I could not love him. To accept such an offer would be entirely mercenary."

Alison smiled despite herself. "Perhaps you do not properly account for the influence of a fine estate?"

"Is that what you think of me? Does Miss Austen portray me as a person who would place financial considerations above harmony and happiness?"

"Not above, no, but I know you are not insensible to the implications of a good income. Did you not first check you inclination towards Wickham upon Mrs. Gardiner's warning he could not support you as a wife?"

"Yes," she replied, shaking off her continued surprise at the extent of Alison's knowledge, "but the man's perfidy surely negates his value as an example."

"Not at all. It merely illustrates that you are not all romantic: practical considerations, like how to eat and shelter, will override your emotional inclinations."

"I might secure myself a respectable union without aspiring to Pemberley."

"But this has nothing to do with respectable union!" Alison cried, revealing some of her own exasperation. "Yours is one of the world's great love stories. Fitzwilliam Darcy is the only man with whom you will ever be happy."

Elizabeth listened to these words in shock. Alison had hinted often enough that Mr. Darcy played an important role in her future, but to consider the man in the light of a lover was almost horrifying, how else to explain the twisted feeling descended on her chest, which fluttered almost painfully? "It is impossible," was her soft reply.

"No. It is not impossible. Go to Derbyshire. When your aunt and uncle choose to visit Pemberley, assure yourself the family is away and go with confidence. The rest will take care of itself. Just have some faith and write to me everyday, for I will be on edge to learn all your doings."


"I doubt they will be what you wish to hear. My first effusions might less insupportable than those of the generality of travelers, but they will not be to your purpose. Nothing but where we have gone - which lakes, mountains, and rivers we have seen. I can promise no more."

"You can promise not to thwart what I have predicted," Alison retorted.

Elizabeth allowed a small smile to curve her lips. "Yes. I suppose I can promise that." She felt a small sensation of excitement infuse her being. "If to Pemberley we are to go, I will not protest."

"Good!" Mrs. Bennet sighed with some relief. "Now we had best procure you a few day gowns for your trip, and I think one for the evenings."

Elizabeth laughed. "If my humble attire did not frighten Mr. Darcy away before, he cannot be overly sensitive to it now."

"It is not Mr. Darcy who concerns me. One never knows where one might be confronted with the pettiness of our sex, and while a fine gown will not quiet a tongue bent on maliciousness, it will gall a jealous heart, and I think that can be rather satisfying, don't you?"

Read Chapter Twenty
Posted by Alexa Adams at 9:36 AM