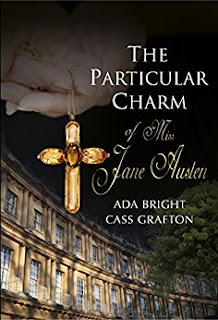 My deeper relationship with Austen began when I was in college. We were reading Persuasion in a Romantic Literature class (the first and only time I encountered Austen on a syllabus), and I began to imagine Anne Elliot walking beside me across campus or sitting in a lecture hall, and what she might have to say about our modern world. This was long before I knew anything of fan fiction, other than that it existed. These memories came back to me with sharp clarity when I read this scene:

They continued in silence for some distance, though both of them cast a meaningful stare at No 4 Sydney Place as they passed, but as they reached the Beckford Road and began the ascent, Rose turned to Jane again.


"Does the noise bother you? The road? This is a main route to Warminster and beyond and has such heavy traffic."


Jane smiled. "Much is altered." She looked around and gestured with her arm. "Naught but open fields bordered the Gardens." Her expression sobered. "My disinclination for our removal to Bath was much compensated for by our pleasing situation in Sydney Place. One does not feel - did not - feel so confined be the city on its outer edges."


"Then shall we walk along the canal?" Rose pointed to the gap through which the towpath could be seen, winding its way towards Bathampton. It was a route she had often trod in the summer months when still living at home.


They fell into step again, continuing to walk side by side at first for the width of the path permitted it.


"I did not answer your question." Jane glanced at her, and Rose frowned. "Noise emanating from these modern conveyances does not trouble me, for it is merely different. The constant rumble of wheels over cobbles, the clatter of hooves is not so much lower in volume than your modern conveyances. 'Tis why I prefer the country; the disturbance of silence has a more natural source: birdsong, flowing water over stones, the bray of a lamb... these things I miss more than any other."


Rose glances around. It was peaceful by modern-day standards on the towpath, with a few ducks swimming in the canal and very few people about, but just then a light aircraft came overhead, it's engine chugging away, and she glanced at Jane as they walked.

"And what do you make of our 'modern conveyances'? You must have seen the trains passing through Sydney Gardens, too, if you've been here a while, and noticed the planes flying overhead?"


Jane looked up as the small plane sailed out of view. "If I may fly through time, why should man not have discovered how to fly though the air?"


A few months later, I myself was wandering over the streets and paths so meticulously detailed in The Particular Charm of Miss Jane Austen by Ada Bright and Cass Grafton (visit them at TabbyCow.com), at the 2016 Jane Austen Festival in Bath. I sighed just now as I wrote those words. They are a vivid reminder of how much blogging I have neglected. I never got passed the National Portrait Gallery (got a bit bogged down there, I know, but it was so awesome!), and failed to share anything of my fabulous stay in Bath here. Nor did I ever write this book review. I am a big believer in better late than never. Good thing, too.

Anyway, when I was in Bath last fall, this book was like a mental guidebook: its scenes reenacting themselves before my mind's eye. It was my first time in Bath, and when I got lost a few times, this ability was quite useful! If you have long yearned to make the pilgrimage to the Festival, as I did, than this book is honestly the next best thing. It takes place during the festival. The main character, Rose, walks in the promenade. How eerie was it for me, following in her footsteps, and knowing that one of the authors, Cass Grafton, was somewhere in the crowd! I have had the pleasure of getting to know Ms. Grafton over the past two years, as she lives not far from me in Switzerland. Her presence was just another layer adding to my glee in being where I was, when I was. The only thing missing was the fair weather Rose and her friend Morgan enjoyed during their promenade (fortunately, like Captain Wentworth, I had "equipped myself for Bath" and purchased an umbrella).

The story is one of time travel, friendship, and not taking anything for granted. Thematically, it reminds me in many ways of my own Being Mrs. Bennet, the second draft of which I was completing when reading this novel, though on the surface they are wildly different stories. Rose Wallace has always lived in Bath or its environs. Her future is there, even if a few demons from her past still haunt the ancient city. Her encounter with a time traveling Jane Austen, in whose adventure she becomes totally enmeshed, teaches her many of the same lessons hard-learned by an Austen heroine (or two).

The Particular Charm of Miss Jane Austen is such a great title for this particularly charming novel. It has such a mix of things going on: an homage not just to Jane Austen, but also to the fantasy genre. Other reviews I have read of this book compare it to a wild variety of other stories, and that's because there are so many influences informing the action. It's apparently clear that, just like Jane Austen, Ms. Bright and Ms. Grafton share a passionate love for books of all sorts. This novel is not fan fiction, but I think it is no less a book for fans. The enthusiasm of fan culture permeates it. To me it felt like the authoresses had taken Hermione Granger's time turner and transmuted it into an amber cross (there is an awesome moment in the book when Rose gives Jane a copy of The Philosopher's Stone to read). Such fun! I do hope there will be a sequel. The end leaves an opening for one. I feel like the adventure has only just begun, and I definitely want to be on board when it continues. Highly recommended!
Posted by Alexa Adams at 6:00 AM