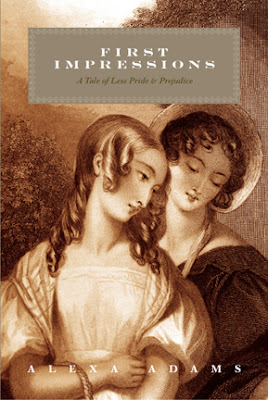 Eleven years ago tomorrow, my first novel, First Impressions: A Tale of Less Pride and Prejudice, was published. It seems like forever ago and, simultaneously, yesterday. I have been struggling to rewrite the book, combining it with its two sequels (which were never part of the original plan) for three years. It's a way bigger project than I ever imagined. In fact, I had envisioned breezing through it in the chaotic days following the birth of my last child. That was both wildly optimistic and naive.

I really would have liked to celebrate the book's 10th birthday, but not only was the blog kind of dead in the water at this time last year (and the several proceeding years), but I was also struggling to cope with the early days of lockdown. Understandably, my thoughts were elsewhere. So to try to make the event a bit special this year, here is a first peek at some new, original material from the revision (confession: I did actually do a reading of this excerpt back in December, but as no one actually saw it, this is legitimately a first peek). I intended this to be an extension of the prologue to the third book, Holidays at Pemberley, but I am now working on yet another new scene, and it will proceed all the events previously chronicled in the trilogy. That, however, is nowhere near ready for eyes beyond my own, especially considering it still exists mostly in my head. Hopefully, I'll get it on paper soon. In the meantime, enjoy part of the beginning to the new (though still rough) and improved (I trust) Tales of Less Pride and Prejudice: 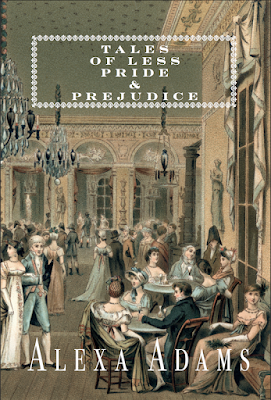 Mr. Lucas was a man in his ascendency. Though born of humble parents, his life’s journey elevated the
family from their mercantile roots to glorified heights unimagined when he was but a suckling babe in his mother’s arms. He utilized his mayoralty well, making much of the economic opportunities afforded by conflict and amassing a small fortune. In recognition of his contribution to the war effort, he was honored with a knighthood, a distinction so strongly felt that he was compelled to divest himself of his business interests and quit Meryton, removing his family no less than a full mile outside of town, denominating his new abode Lucas Lodge, and reinvented himself into a country squire, with no greater occupation than being civil to all the world.

Unshackled by business, Sir William set about increasing the size of his family, which swelled with the years. The tidy fortune with which he had retired was sufficient to provide his sons with the educations and inheritance required to complete the family’s ascendency to the gentry, but his daughters were left rather portionless in the process, forced to rely on their charms and wit to secure husbands devoid of trade’s taint. With the latter commodity, Charlotte was well-endowed, more so than her sisters, who were richer in the former.

Before the rapid family expansion began, Charlotte and her next brother, Will, were for many years the only children. One might assume they would, therefore, have a closer bond than the others, but it was not the case. The two never got along very well, Will perhaps feeling his father’s new consequence too much, and Charlotte too pragmatic to indulge his inflated self-importance. Her sisters, while very dear to her, were not her intellectual equals, and so she was forced to seek quality companionship beyond the walls of the Lodge. Fortunately, within a short walk lived the Bennets of Longbourn.

Mr. Bennet was of old family, long landed in the area. He had married a wife who was native to Meryton, the daughter of a local attorney possessed of a small fortune and good looks, and together they began a family. Thus far, it consisted of four girls. As the estate was entailed on descendants male, it was generally believed that many more children could be expected to follow, until the longed for boy was born. The two eldest daughters, Jane and Elizabeth, were old enough to be something like companions to Charlotte. Though not much older than her own sisters, they provided her with far more stimulating conversation than could be found at home. Consequently, she was a great deal at Longbourn, and Jane and Elizabeth, likewise, were often be found at Lucas Lodge.

On one such day, near the end of the old century, while snow gently fell outside and large fires made all snug within, the three girls barricaded themselves in Charlotte’s room and played with Josephine, the doll given to Miss Lucas by the Westover family nearly a decade before. While Charlotte was rapidly leaving girlhood behind, she was yet young enough to highly resent her sisters playing with what was most certainly hers, as they had been found doing, resulting in a vindictive expulsion of the younger girls from both Josephine’s noble presence and the room. Being well beyond having any interest in actually playing with the doll, Charlotte pulled out her sewing basket instead and looked for scraps that might be fashioned into clothes for her, a task in which the Bennet girls were happy to assist.

“That brocade is lovely, Charlotte! Let us make her a ball gown,” Jane exclaimed.

Charlotte smiled. “It is from a scrap of the remains from my mother’s presentation gown. She gave it to me to trim my new cloak, and this is the last remnant I have, but as it is too small to use for much else but a doll’s overskirt, a ball gown it shall become. I have some silk we can make into a bodice.”

Jane, a fine little seamstress, began to lay out the fabric and take measurements, all the while trying to keep her sister from cutting it to pieces before all her preparations were in order. To distract her, Charlotte called Elizabeth’s attention to a small box of spare beads, which they set about sorting for use in trimming the gown. Elizabeth excitedly proclaimed which were her favorites, carrying the transparent ones to the window in order to probe their depths. Charlotte laughed at her antics. It was impossible to not be charmed by the little girl.

“There,” Jane declared, when she had finished with the gown’s design. “Now you may cut out the pieces, Lizzy, but do be careful not the shred the brocade. We have little enough as it is.”

“Josephine only hires the finest modistes and milliners to construct her wardrobe,” Charlotte teased. “She could entrust no one less with such an important task.”

Elizabeth looked up from her work. “Why should a lady’s wardrobe be so important? Mama speaks of it endlessly. I do not see why I should always be scolded for getting dirty or tearing a hem. When she insists I wear such flimsy fabrics, what else can be expected to happen?”

“I think Mama expects you not to be climbing trees and running through fields.”

“That is all very well for you, Jane, but it is not in my nature to behave otherwise. The clothes should be made to suit me. Why should I be forced into alterations to fit them?”

“Eliza would rather go about in trousers, like one of the boys, that she might climb to the very highest branches of the oak tree in the church yard without causing a spectacle.”

The two elder girls laughed, but Elizabeth remained studiously thoughtful, eventually saying, “No, I should not like that. Why can I not dress like a girl and still be able to romp about, the way the Wilson girls do?”

“You are Miss Elizabeth Bennet of Longbourn. The Wilsons are my father’s tenants. There is a deal of difference.”

With complete attention did Elizabeth now focus on the task at hand, carefully working the scissors, her small face taut with concentration. As she liberated each section, Jane began stitching the tiny gown together, and Charlotte assisted each when needed. As she helped Elizabeth straighten the fabric, she revived the former subject.

“You asked why you ought not conduct yourself at the Misses Wilson do. I am sorry to say it, but such questioning can do one little good. From what I have thus seen of the world, regardless of where and for what initial purpose its restrictions derived, one must abide by them or suffer the consequences. A lady has very few avenues by which to secure her position, marriage being by far the best. You may not behave as the Wilsons do, because it would hurt your future prospects.”

Elizabeth had stopped working to listen to this speech and now frowned intently at Charlotte, “But that is unfair.”

The older girl nodded. “I think so, too. Unfortunately, fairness is rather irrelevant.”

“I do not think it so awful,” said Jane. “Someday, like Josephine, I will put on my most beautiful gown, made just for the occasion, make my entrance into a beautiful ballroom, where I shall meet a most handsome and eligible gentleman, and we will fall in love, have ten children, and live happily ever after,” she concluded with stars in her eyes, causing both of the other girls great amusement. “I do not see what is so humorous,” she protested, her feelings bruised. “Is it not what all women wish?”

“Certainly most of them,” Charlotte replied with an encouraging smile. She did not mean to disrupt the serenity of Jane’s dreams for the future, they being far safer to indulge than Elizabeth’s revolutionary notions, but she could not help but think the younger Bennet possessed greater penetration than her sister.

“Do you not wish for a handsome husband?” the former now asked, her sparkling eyes studying Charlotte intently.

“I think I should value a kind husband more.”

“But you do want to be married and have a family?” Elizabeth pressed.

“Certainly. Having no personal fortune to see to my own future, my only other options are to either live with Will,” Elizabeth twisted her face at this notion, “take a position as a governess,” now the little girl laughed, “or marry whatever man is so gracious as to ask me. Which should you choose?”

“To be married, of course! But I do so hope I might meet a gentleman both kind and handsome.”

“Do not forget rich,” Charlotte added.

As the two younger girls chattered on about what the future might bring, Charlotte withdrew to the window to stare at the falling snow. All such talk was still the distant future to her companions, but she was getting close to the time when she would begin the search for a husband, and a real one, too, not some creature born of fairytale. The prospects in her own neighborhood were not good, and she had little opportunity to form new acquaintances from the broader world. Certainly, a handsome, kind, and rich husband would be delightful, but she was too practical to consider such a possibility. She set her sights on kind and respectable. For more, it was too daring to dream.

I think it fitting that these combined tales will be hitting their teen years at the same time as my eldest child. I'm in such a very different place than I was when I began this JAFF journey. It is rather overwhelming to dwell upon. I like to think my writing has greatly improved over the last decade. I hope it has. May the new volume, whenever it's complete, reflect that. Thank you, as always, for reading.
Posted by Alexa Adams at 6:00 AM