More on Austen and Contractions 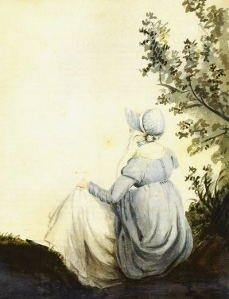 Wow! I'm actually composing new content. I had intended to keep recycling my removed material, but my last post on Austen's use of contractions provoked so much engagement, and, consequently, new questions and research, that I'm actually inspired to follow up. Perhaps blogging begets more blogging? Makes sense to me. I'm going to try my darnedest not to overanalyze the situation and just roll with it. What is transparent is that I geeked out hard.

Thanks to informed readers (much obliged, Suzan Lauder), I was made aware of some previous research on the subject of contractions published in 2013. If I've followed the trail correctly, it was first posted at Jane Austen's Tea Room, then maybe it was reposted at A Happy Assembly? I'm not perfectly certain. The author was "JanetR," or Janet Rutter, a vibrant member of the online Jane Austen community who unfortunately passed away in 2018. Her survey of contractions in Austen includes the letters and fragments, which is awesome! She also counts how many times each character uses which contractions. I wish I knew who to ask for permission to repost her work, as it is an excellent resource. Instead, I shall have to limit myself to commenting on the two areas which I found particularly compelling.

First thing, I must address the contractions Austen uses to convey her own voice in her letters. This is really interesting, because she apparently only uses 16 contractions in all her letters, almost all of them "don't." Compare that to 38 contractions in Emma, 41 in Mansfield Park, and 77 in Sense and Sensibility! My initial take away was that while Austen might choose to convey informality, a level of comfort, or a coarseness of manners with the judicious use of contractions, she was very reluctant to allow them to creep into her personal writing. But as I dug deeper, I began to rethink a lot of assumptions. More on that to come.
The second thing I must mention about JanetR's work is that,because I did not include fragments in my survey, I completely missed the fascinating use of "be n't" in The Watsons, which I've also seen transcribed as "be'nt" or "ben't" (the latter is how JanetR spelled it):

He was rewarded by a gracious answer, and a more liberal full view of her face than she had yet bestowed. Unused to exert himself, and happy in contemplating her, he then sat in silence for some minutes longer, while Tom Musgrave was chattering to Elizabeth ; till they were interrupted by Nanny's approach, who, half-opening the door and putting in her head, said, – "Please, ma'am, master wants to know why he be n't to have his dinner?"

Don't try to parse Nanny's sentence structure. It gave me such a headache. I'm honestly not even sure what words are being contracted, though her meaning remains clear. It is of no surprise that it is a servant who says it. Over the course of the past week, I have become increasingly fixated on the use of contractions in Austen not as an indicator of a casual or sloppy manner of speech, but also as a means to command dialect. Writers have been doing this since the introduction of the grammatical oddity we call the apostrophe during the Renaissance, when it was used to indicate the absence of letters, not as an indicator of possession. Adds a bit of historical clout to the use of contractions, doesn't it (you can read more about it here).
Now let me diverge from contractions, just for a moment, as a comment at Jane Austen Fan Club sent me down a different rabbit hole, one that kind of shook all the assumptions with which I had originally embarked on this research. I was asked if I knew why Austen seemed to separate some compound words, like everybody (every body) and anything (any thing). I knew in my heart as soon as this arose that it was probably something the printers did. It took me two minutes to pull up images of Austen's fine manuscript of Lady Susan from the Morgan Library in New York and confirm my hunch. I continue to be in awe by the ease with which I can access once terribly inaccessible documents. I quickly found "anything" twice in the conclusion. Based on spacing it looks like one word, though Austen did not connect her y and t. So I found "everybody" in Letter Five, which is more clearly one word, though the y and b also don't connect (by the way, this is kind of what my script looks like 😍, much to the frustration of my grade school teachers). But it made me think: how many of the contractions that I have been pouring over are really Austen's and not the printers?
An excuse to dig further! I celebrated the opportunity. Could I have used Lady Susan as my source document, the adventure would have concluded easily, but there isn't a single contraction in the entire document (hmmm), so I had to turn to her juvenila, some of which is available digitized from the British Library. Love and Friendship, by virtue of being searchable at mollands.net, was my first choice. I had not surveyed it previously, and the contractions in it surprised me. I immediately noticed a frequent use of "tho'" and "altho'", but the British Library only has the first five pages of the manuscript available online, which was not enough for me to verify any of Austen's standard contractions, just these novel "tho's."  So I turned to A History of England instead, a bad choice, as there is no dialog in it at all (where Austen's contractions are most frequently found), but as all of it is available though the British Library's Turning the Pages project (so awesome), I gave it a go. However, as suspected, no contractions, but I did count four more tho's, and the mystery deepened. Next, I tried the original, "cancelled chapters" ending to Persuasion. Again, no proper contractions, but quite a few tho's, even as she also writes out "though," and also a lot of "wd" and "cd" as abbreviations for could and would. I also spotted a "learn't." I'm chalking that one up to this being a very rough draft. I don't think it would have made it into print.
At this point, I was starting to despair ever finding primary source proof that Austen really ever used contractions at all. My last hope: the few digitized letters available. Alas! Not a single contraction in any of them! What can this mean? I am left in frustration to wonder if any of Austen's contractions are really her own, or if they all might be the work of others. Clearly, she used them as short hand, also to indicate dialect in lower class and familial company, but might many others be attributable to production's meddling hand? The fact that her clean copies of Lady Susan has removed any use of shorthand makes me doubt that she would have submitted a manuscript containing it. Technology, my usual ally, has failed me in this instance (though it did lead me on a mighty fun ride). If I really want to pursue this, I shall need to prostrate myself before a series of libraries and foundations and beg for access to the original letters. Probably not going to happen any time soon.
What do you think? Is my previous post on contractions still reliable? Or have I just cast a whole mess of doubt over the entire subject?
Posted by Alexa Adams at 6:00 AM