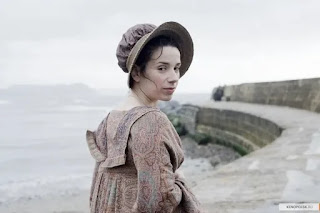 "When the evening was over, Anne could not but be amused at the idea of her coming to Lyme to preach patience and resignation to a young man whom she had never seen before; nor could she help fearing, on more serious reflection, that, like many other great moralists and preachers, she had been eloquent on a point in which her own conduct would ill bear examination."

Patience and resignation. Sigh. I feel like I'm preaching these notions a lot these days, as we stare into the void of another covid winter, and like Anne, my own conduct doesn't set the best example. The past year and a half has delivered such a brutal series of disappointments and tragedies. Sometimes I feel like I'm getting used to it. At other moments, I feel like I just can't take anymore. I assume these are the same experiences the entire world has had. Regardless of our cultures, political persuasions, and places in the world, I think it's safe to say this much is universal.

Jane Austen has so often been such a steady guide for me in times of trial, but I've struggled with her a bit during the pandemic. One line from her letters particularly haunts me lately: "How horrible it is to have so many people killed! And what a blessing that one cares for none of them!" (May 31, 1811). I used to think this so insightful - and in all truth, it is - but now it just feels so cold and heartless a thing to acknowledge aloud, even if in our hearts we are grateful it wasn't our friend, our neighbour, our family ... this time. But then again, don't we also require a bit of hard callousness to just cope with the incessant string of horrors? I fear the conduct of very few of us bears examination.

Anne Elliot's musings and advice to Captain Benwick are of use to me at the moment. I thought I would share how I apply these fictional examples to my very real life, just in case another might find it useful. This is her first response to Captain Benwick's introduction:

"And yet," said Anne to herself, as they now moved forward to meet the party, "he has not, perhaps, a more sorrowing heart than I have. I cannot believe his prospects so blighted for ever. He is younger than I am; younger in feeling, if not in fact; younger as a man. He will rally again, and be happy with another."

This is such an interesting line, and I could write paragraphs about what is reveals of Anne's despondency, insight, and egotism, but my relevant takeaway is we should never assume how much another suffers, nor compare it in degree with our own troubles.

While Captains Wentworth and Harville led the talk on one side of the room, and by recurring to former days, supplied anecdotes in abundance to occupy and entertain the others, it fell to Anne's lot to be placed rather apart with Captain Benwick; and a very good impulse of her nature obliged her to begin an acquaintance with him. He was shy, and disposed to abstraction; but the engaging mildness of her countenance, and gentleness of her manners, soon had their effect; and Anne was well repaid the first trouble of exertion. He was evidently a young man of considerable taste in reading, though principally in poetry; and besides the persuasion of having given him at least an evening's indulgence in the discussion of subjects, which his usual companions had probably no concern in, she had the hope of being of real use to him in some suggestions as to the duty and benefit of struggling against affliction, which had naturally grown out of their conversation.

It's so kind of Anne to take the trouble to engage Captain Benwick. I need to take more time to do this, despite the language barrier, which I often find prohibitive. It's harder to struggle through conversation in a foreign language when the other person's facial expressions are partially obscured by a mask, but I ought to exert myself to do it more often, and send a bit more connection and care into this splintered world.

For, though shy, he did not seem reserved; it had rather the appearance of feelings glad to burst their usual restraints; and having talked of poetry, the richness of the present age, and gone through a brief comparison of opinion as to the first-rate poets, trying to ascertain whether Marmion or The Lady of the Lake were to be preferred, and how ranked the Giaour and The Bride of Abydos; and moreover, how the Giaour was to be pronounced, he showed himself so intimately acquainted with all the tenderest songs of the one poet, and all the impassioned descriptions of hopeless agony of the other; he repeated, with such tremulous feeling, the various lines which imaged a broken heart, or a mind destroyed by wretchedness, and looked so entirely as if he meant to be understood, that she ventured to hope he did not always read only poetry, and to say, that she thought it was the misfortune of poetry to be seldom safely enjoyed by those who enjoyed it completely; and that the strong feelings which alone could estimate it truly were the very feelings which ought to taste it but sparingly.

I suspect Anne speaks from experience here, and that she can empathize greatly with the type of mind she describes. I relate, too. What we have in Captain Benwick is an ambivert, like me, and probably like Anne. That last line regarding poetry's misfortune sounds like she describes herself: that she is one of those with strong enough feelings to truly appreciate it, and it is exactly that understanding that warrants a cautious approach. This one, for me, is easily applied. During the pandemic I have avoided television, film, and books of too heavy and brooding a nature for my mental state. I cannot allow their influence to lead me down a path of brooding and despondency. I have a family for which to care. I MUST be reigned and patient. The alternative is a mess. But some days go better than others. C'est la vie. What can you do.

I find laughter the best medicine, and thank you, Jane, for always reminding me I always can, even when it is may be somewhat wretched to do so.

And in that vein, here are two different tutorials in disagreement regarding the pronunciation of Giaour. I favor the first:

My love to all. Thanks for reading.