Apologies and Amends, by way of free books and other people's poems 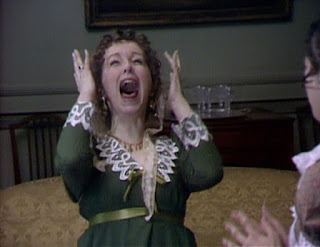 First the apology. There will be no Twisted Austen this year. I am so, so sorry, a largely selfish sentiment, as the entire enterprise is entirely self-indulgent. Is it not our own deprivations we most lament? I had an idea, but simply no time to enact it. What writing time I did have was sucked up in the Mixed-up Mash Up madness, which I had targeted for completion last summer. Now NaNoWriMo looms before me, and I don't know how I'm going to shift my head back to Tales of Less Pride and Prejudice. Again. For the third year in a row. I think I'm going to end up trying to  continue working on both books at the same time, which probably means that I will get no where with either. Sigh.

Anyway, on to the amends.

In lieu of new Twisted Austen and the attendant hoopla, I'm giving away one complete set of the series for Kindle download. Just leave a comment and make sure to either include an email address or that your contact information is accessible through your blogger account. Giveaway is open through Halloween, and the winner will be announced November 1st.

In addition, as I increasingly dwell on reading with my ten year-old daughter on this blog, here are some dark and/or spooky 19th century poems that I'm hoping to get her to engage in with me this Halloween. I have no idea if she'll respond to any or all. I sought short poems, to suit her attention span, which is why some obvious options are not included. Regardless of Eliza's interest, it is always fun revisiting favorite authors. Maybe you will enjoy them, too. I hope so.

As Hermes once took to his feathers light,
When lulled Argus, baffled, swoon’d and slept,
So on a Delphic reed, my idle spright
So play’d, so charm’d, so conquer’d, so bereft
The dragon-world of all its hundred eyes;
And seeing it asleep, so fled away,
Not to pure Ida with its snow-cold skies,
Nor unto Tempe where Jove griev’d that day;
But to that second circle of sad Hell,
Where in the gust, the whirlwind, and the flaw
Of rain and hail-stones, lovers need not tell
Their sorrows—pale were the sweet lips I saw,
Pale were the lips I kiss’d, and fair the form
I floated with, about that melancholy storm.

“Beware the Jabberwock, my son!
The jaws that bite, the claws that catch!
Beware the Jubjub bird, and shun
The frumious Bandersnatch!”

He took his vorpal sword in hand:
Long time the manxome foe he sought —
So rested he by the Tumtum tree,
And stood awhile in thought.

And as in uffish thought he stood,
The Jabberwock, with eyes of flame,
Came whiffling through the tulgey wood,
And burbled as it came!

One, two! One, two! And through and through
The vorpal blade went snicker-snack!
He left it dead, and with its head
He went galumphing back.

“And hast thou slain the Jabberwock?
Come to my arms, my beamish boy!
O frabjous day! Callooh! Callay!”
He chortled in his joy.

Here is an excellent guide to the word play that Carroll utilizes: https://www.alice-in-wonderland.net/resources/analysis/poem-origins/jabberwocky/.

From childhood’s hour I have not been
As others were—I have not seen
As others saw—I could not bring
My passions from a common spring—
From the same source I have not taken
My sorrow—I could not awaken
My heart to joy at the same tone—
And all I lov’d—I lov’d alone—
Then—in my childhood—in the dawn
Of a most stormy life—was drawn
From ev’ry depth of good and ill
The mystery which binds me still—
From the torrent, or the fountain—
From the red cliff of the mountain—
From the sun that ’round me roll’d
In its autumn tint of gold—
From the lightning in the sky
As it pass’d me flying by—
From the thunder, and the storm—
And the cloud that took the form
(When the rest of Heaven was blue)
Of a demon in my view—

If that goes down well, maybe I'll talk her into reading The Raven, or at least revisiting this beauty:

Happy Halloween!
Posted by Alexa Adams at 6:00 AM