Ta-Nehesi Coates of The Atlantic and Jane Austen 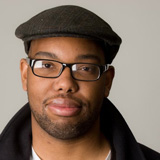 A decidedly non-Janeite friend of mine recently brought to my attention the fact that Ta-Nehesi Coates, a senior editor of The Atlantic and blogger at TheAtlantic.com, has recently been on an self-described "Jane Austen binge". Of course, I had to investigate this phenomenon. The first blog post I found referencing Miss Austen dates from the 1st of February and is entitled "The Vocab", in which he morns the loss of elegance in modern English, quoting Pride and Prejudice as an example:


Continuing my efforts to understand "ladyhood," I've taken to listening to Pride and Prejudice:

Mr. Bennet was so odd a mixture of quick parts, sarcastic humour, reserve, and caprice, that the experience of three and twenty years had been insufficient to make his wife understand his character. Her mind was less difficult to develope. She was a woman of mean understanding, little information, and uncertain temper. When she was discontented, she fancied herself nervous. The business of her life was to get her daughters married; its solace was visiting and news.

This has nothing to do with "ladyhood," but one of the things I've loved about my current pursuit is seeing all the forgotten ways English can be used. You just don't hear people described as being of "mean understanding, little information and uncertain temper" anymore. A few chapters later Austen describes a character who's reading--"With a book, he was regardless of time." There's something beautiful in that which I'm struggling to name.

Well! I certainly can appreciate Mr. Coates sense of aesthetics, and so pressed on through his blog posts. Three days later, in a post entitled "He Was All Attention to Everyone", he continues to express a keen appreciation for Austen's prose:

Within a short walk of Longbourn lived a family with whom the Bennets were particularly intimate. Sir William Lucas had been formerly in trade in Meryton, where he had made a tolerable fortune, and risen to the honour of knighthood by an address to the King, during his mayoralty. The distinction had perhaps been felt too strongly.
It had given him a disgust to his business, and to his residence in a small market town; and, quitting them both, he had removed with his family to an house about a mile from Meryton, denominated from that period Lucas Lodge, where he could think with pleasure of his own importance, and, unshackled by business, occupy himself solely in being civil to all the world. For, though elated by his rank, it did not render him supercilious; on the contrary, he was all attention to everybody. By nature inoffensive, friendly, and obliging, his presentation at St. James's had made him courteous.

I think "The distinction had perhaps been felt too strongly," might be my new favorite sentence.

Wow! At this point, I'm stating to adore this man. Must read on - on February 18th, a post called "How Do You Teach Beauty?" begins like this:

It's always been hard to be an Austen acolyte in America. I think, in college, many people discover that Austen was a feminist social satirist. Before that, most people probably dismiss her as a romance writer who is obsessed with women, their beaus, and so, so many walks. There's always an undercurrent of misogyny in dismissing her books as lady fare. But there aren't many people who know what a fantastic stylist she was, and I'm not sure forcing high school students to read Pride and Prejudice will ever solve that problem.

And the homage not only continues but increases. On February 18th, in an awesome post with an even more awesome title, "Jane Austen Just Dissed You", Mr. Coates expresses the awe and love for Jane that only a newly converted Janeite can, as we who have long adored her come to take for granted (it's inevitable - might as well admit it!) the greatness that Mr. Coates marvels at. I can only do justice to the post by quoting it in its entirety:

In as short a time as Mr. Collins' long speeches would allow, everything was settled between them to the satisfaction of both; and as they entered the house he earnestly entreated her to name the day that was to make him the happiest of men; and though such a solicitation must be waived for the present, the lady felt no inclination to trifle with his happiness. The stupidity with which he was favored by nature must guard his courtship from any charm that could make a woman wish for its continuance; and Miss Lucas, who accepted him solely from a pure and disinterested desire of an establishment, cared not how soon that establishment were gained.

The stupidity with which he was favored by nature...
I think Austen erects the most gorgeous and intricate sentences. They move with force in one direction, and with an incredible suddenness turn back on themselves. You think you're reading one thing, when in fact, you're reading something else. So often I've found myself confused by an irony poking out from the understructure of her sentences. There are no signs that say, "Hey I'm being ironic." It's so much more natural, and so absent of pretense.
And then, so as not to fall into the kind of blank-minded nihilism all around us today, she's capable of these moments of great romance. Here is Mr. Darcy proclaiming his feelings:

In an hurried manner he immediately began an enquiry after her health, imputing his visit to a wish of hearing that she were better. She answered him with cold civility. He sat down for a few moments, and then getting up, walked about the room. Elizabeth was surprised, but said not a word.
After a silence of several minutes, he came towards her in an agitated manner, and thus began,``In vain have I struggled. It will not do. My feelings will not be repressed. You must allow me to tell you how ardently I admire and love you.''

This comes after paragraphs and paragraphs of violent language, of Austen carving up her characters and then serving them to the reader. But then in the middle of it all you get a scene like this. Again the language is built of irony--demanding that someone allow you to profess your love for them.
This is a really fun book.

Yes it certainly is, Mr. Coates, and it just gets better, as do his posts! Ten days later, in a February 28th post entitled, "To Make Sport For our Neighbors", he keeps it simple:


Jane Austen on the secret of life:

For what do we live, but to make sport for our neighbors and laugh at them in our turn?

Go Mr. Bennet! And in a March 1st post entitled "Snobbery", he tests the waters of Austen on film:


I tried watching a few scenes from the BBC's Pride and Prejudice. But as Awesome Jane would say, I quit the thing directly. I like the pictures in my head, and would not see them overthrown. Through their observation, I have garnered a first printing accessible to no one but me. My Pride and Prejudice, is truly mine, and I have no real interest in replacing it with a collective portrait. I don't want a literal picture of Mr. Darcy. The fog of my mind is clear enough.

Now, as we well know, once Mr. Coates has read everything Austen wrote he will have to embrace the films, because once you've had a taste you cannot get enough. Nevertheless, I find his current perspective extremely touching. He expresses the personal relationship Austen forges with her readers perfectly, continuing thusly:


I would go so far as to argue that the text, itself, forms a picture. For you approval, I present Mr. Darcy in love:

I cannot fix on the hour, or the spot, or the look, or the words, which laid the foundation. It is too long ago. I was in the middle before I knew that I had begun.'

That is a truly muscular set of sentences, so understated, and yet brimming with passion. No ornamentation, just the elegant, simple work--I was in the middle before I knew I had begun.
Here is our champion, much earlier, in denial:

...Darcy had never been so bewitched by any woman as he was by her. He really believed, that were it not for the inferiority of her connections, he should be in some danger.

I talked last week about how Austen's sentences turn back on themselves, almost as if they're fighting each other, and out of the conflict you get some sense of the character. Here is a man overrun by emotion, and yet of the erroneous belief that the strictures of his world, the rules of aristocracy will save him from himself. I will say that many of us know what it is to try to talk ourselves out of love. Darcy actually believes that no talking is necessary--society is the armor about him. It's all about the hubris of man, and our seductive sense that the institutions we erect are impregnable to nature, most especially, our own.

Of course I approve! The reason why Austen transfers so well onto film is precisely because of her ability, with almost no physical descriptions, to paint such precise portraits of her characters. Whether Darcy appears in our head as Laurence Olivier, Colin Firth, Matthew Macfadyen, or as an image of our own invention, he is always, indisputably, Mr. Darcy, just as Austen wrote him.

In a March 3rd post entitled, "I was In The Middle, Before I knew I Had Begin", when, just like anyone who has caught the Jane bug, Mr. Coates has moved on to Sense and Sensibility, he expresses himself gorgeously on the subject of Austen addiction, reflecting sentiments that every Janeite understands all to well:


I'm supposed to be reading about the history of antebellum Virginia. I decided to split that time with a bit more Austen. This is about learning how to write from a master. It's also about how classic works bestow a kind of immortality. Awesome Jane has been dead for centuries, and there is something so intimate about her style. I feel like she's talking to me, and strangely enough, only to me. It really is kind of sick to say this, but I think I'm in love.

"Awesome Jane"! I love it ! I suppose it's a modernization of "Devine Jane", an expression with which I must wonder if Mr. Coates is familiar.

And the fun continued this week. On March 7th, in a post entitled, "Talk To Me Like I'm Stupid", which actually includes an image of a Victorian fashion plate (you heard me right!), Mr. Coates questions how fashions changed so dramatically from the Regency to the Victorian period. The man certainly is in the middle before he knew he had begun. I see promising signs of full blown obsession. And on the same day, in a post entitled "She Eats Writers Like Part of a Complete Breakfast", he compares Austen's use of language to hip-hop. I urge everyone to pay attention to Mr. Coates burgeoning Janiteism. Seeing her discussed side by side with modern politics and race relations is cold water in the face of all who claim she is irrelevant to contemporary society. Furthermore, Mr. Coates championing provides us with a modern negation of those ridiculous claims that her writing is strictly chick-lit, and let's face it, we need a living man to hold up as an example of her masculine appeal. You can follow Mr. Coates at http://www.theatlantic.com/ta-nehisi-coates/. We Janeites are a diverse group, and I am sure many of you will not agree with his politics, but I think we can all agree on "Awesome Jane".
Posted by Alexa Adams at 8:46 PM