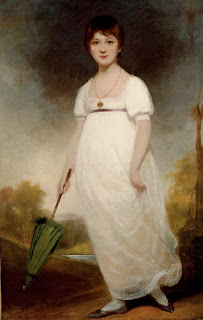 Jane Odiwe, artist and author of Lydia Bennet's Story, Willoughby's Return, and Mr. Darcy's Secret, has been at the forefront of unraveling a real life Austenesque mystery. The subject is the controversial "Rice Portrait" of Jane Austen, long believed by some to be the best (by far) portrait of the writer ever painted. The authenticity of the painting's subject has been a matter of dispute for generations. If it is Jane, it is the answer to many a fan's dreams, portraying her in all the youthful beauty we would like to attribute to the beloved author, but verification has never occurred. The argument for the portrait is compelling: the Rice family are direct descendants of Edward Austen Knight, Jane's wealthy brother, and the painting has been in the family since shortly after its execution. Despite familial testimonials, which have long held it to be an image of Jane, doubts about the painting have centered upon the lack of written mention of it from contemporary sources and questions about the period appropriateness of the sitter's dress. However, Ms. Odiwe has been presenting new and exciting evidence that makes the case that the portrait is indeed Jane and, perhaps even more thrilling to me, revealing a new painting that might very well be an even earlier image of the writer, portrayed with her family as a very young girl. I was ecstatic to be asked to share this information with you, and I urge everyone to follow Ms. Odiwe's blog (http://janeaustensequels.blogspot.com) as she reveals more and more pieces to this fascinating puzzle. 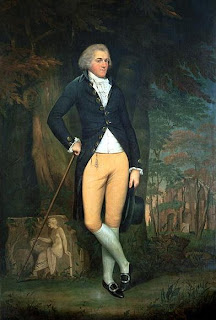 The first aspect in this new argument for authenticity is premised upon identifying Ozias Humphrey, portrait painter and miniaturist, as an established painter of the Austen family. Ms. Odiwe provides a brief biography of the artist in her first post in this series, which you can read here. Humphrey most certainly painted a portrait of Austen's great-uncle, Francis Austen of Sevenoaks, the man who paid for George Austen's (Jane's father) education and presented him with his second living at Deane, and Henry Austen is recorded commenting upon the painting. Furthermore, it is believed that Jane and Casandra were visiting Francis at the time when the Rice Portrait was commissioned. Humphrey's work can be identified by an unusual insignia he included in his paintings: an O with an H crossed through its middle. Ms. Odiwe's second post (read it here) focuses on identifying this mark in a series of Austen family portraits, starting with the verified image of Edward Austen Knight upon the occasion of his Grand Tour in 1788. First establishing a compelling argument that this portrait was not painted in Rome, as has been asserted, but in England, she goes on to identify Humphrey's signature hidden in the texture of the tree upon which Edward leans (an English oak). This brings us to the contentious portrait of Jane, also believed to be executed in 1788, in which she identifies not just one, but three potential monograms: in the tree, by her shoe, and in the locket around her neck. 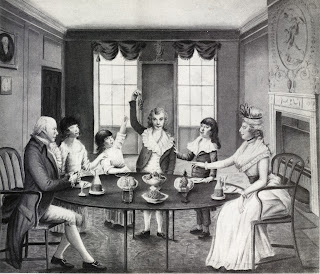 Humphrey's establishment as a painter of the Austens becomes even more important in Ms. Odiwe's third post (read it here), in which she presents what she call a "Conversation Piece" and argues it is, in fact, an image of the Austens upon the occasion of Edward's adoption by the Knights. As intrigued as I was by the notion that new evidence has emerged confirming the identity of the young lady in the Rice Portrait, this painting sends cascades of chills down my spine. It is of a family, of a socioeconomic situation in keeping with the Austens', celebrating the eldest boy portrayed holding a bunch of grapes in triumph as his family looks on approvingly. If this is the Austens, then Jane is the young girl to Edward's left, flanked by Cassandra, and the boy on Edward's other side is either Henry or Francis (the latter is favored). James would be at school at the time, and Charles would still be with his wet nurse. The painting was part of a Godmersham Park (the Knight family home) estate sale in 1983 and is described in the accompanying Christie's catalogue, but its current whereabouts are unknown. Unfortunately, ths leaves us without a great image of the painting, or the ability for experts to examine it first hand, but Humphrey's signature OH can be spotted in many spots, (unfortunately, none of these are identifiable online). Even more exciting is the fact that Jane seems to be holding a horseshoe nail in her hand and pointing it at Edward. To return to his portrait, a similar (very small) horseshoe nail can be identified pointing towards him at his feet. Family lore has it that this symbol was significant to Edward, and Jane herself makes reference to it in one of her letters from 1813. I hope Ms. Odiwe will be revealing more information about the relevance of this symbol, but a bit of light research I have indulged in on my own reveals that horseshoe nails have long been used, like horseshoes themselves, to bring good luck and provide protection. There is also a religious affiliation, made in reference to the crucifixion. 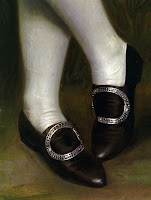 While I feel like more information is still required (and most anxiously desired!) there is no doubt that Ms. Odiwe's recent posts are amongst the most fascinating it has ever been my pleasure to read. Let us all hope that we can, with brazen confidence, someday declare that the pretty young lady in the Rice Portrait is none other than a gorgeous Jane Austen. If we can add to the pleasure that of identifying an even younger Jane in the Conversation Piece, we will be happy Janeites indeed. Keep following this story on Ms. Odiwe's blog, and I will follow up as more details are revealed. Most importantly, if anyone has any information that helps authenticate either painting or regarding the current whereabouts of the family portrait, please get in contact with Ms. Odiwe via her blog, as the Rices are (understandably) very anxious to get to the bottom of these mysteries.
Posted by Alexa Adams at 12:04 PM