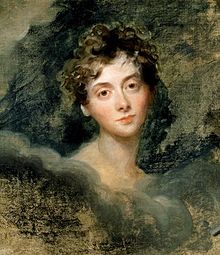 The "three or four families in a country village" which Jane Austen chose to focus upon did not allow her scope to include the grand personages of her day. This, however, does not stop writers of Austenesque from including those larger than life personalities, the celebrities that determined the manner in which the Regency Era lives on in our imaginations, in their reworkings of Austen's novels. People like the Prince Regent, Beau Brummel, Lord Byron, and Lady Jersey can all be found in the thousands of stories that Austen has inspired, both directly and indirectly, and I have recently been reflecting on the way in which fiction has determined my feelings about these people. The inspiration for this train of thought comes from Our Tempestuous Day: A History of Regency England by Carolly Erickson, which I just read, and her depiction of Lady Caroline Lamb. She writes:


Caroline's fashionable circle dazzled Byron, but her explosively original personality dazzled him even more. "She possessed an infinite vivacity of mind," he wrote, and in truth her quicksilver facility with words and love of wordplay was like him own, though more heated.


"My most sanative elixir of Julep, my most precious cordial confection," she wrote, addressing her cousin Lord Hartington as if he were a medicine chest, "my most dilutable sal polychrist and marsh mallows paste, truly comfortable spirit of hartshorn tincture of rhubarb and purgative senna tea!" Her letters were a quirky, eccentric jumble of exclamations, playful archaisms, deft verbal dodges and feints, the whole working together to scan like poetry. Sometimes they were in poetry, or rather light verse. Her conversation, it is safe to suppose, was as brilliantly eccentric as her writing, intense and full of curiosity and wit, with abrupt changes of mood and subject that kept her listeners enthralled.

This image conflicts with the assumptions I had made about Lady Caroline, almost entirely based upon the fictional accounts of her I have come across in novels. Suddenly she seemed a brilliant woman trapped in a restrictive world, just like Austen. Though familiar with her basic biography (summarized quite nicely at http://janeaustensworld.wordpress.com/2007/03/11/lady-caroline-lamb/), I had never taken any interest in her infamous novel, Glenarvon, and generally breezed over her role in history, content in my disinterest. Now I feel compelled to study her further, and I intend to read a biography of her (I'll let you know how that goes), and possibly peruse the suspicious novel. My prejudice towards Glenarvon is based almost solely upon the depiction Georgette Heyer supplies of both the novel and its author in Bath Tangle (which I reviewed here):


"Good God, no! It is the most absurd farrago of nonsense! But I prophesy it will run through a dozen editions, because none of us will be able to resist searching either for ourselves or our acquaintance in it. Could you have believed it? - Lady Caroline Lamb is the author? The Lambs are all in it, and Lady Holland-very well hit off, I imagine, from all i have ever heard of her, but Papa disliked that set, so that I was never at Holland House - and Lady Oxford, and Lady Jersey, and poor Mr. Rogers, whom she calls a yellow hyena? I must say, I think it unjust, don't you? Glenarvon, of course, is Byron, and the whole thing is designed as a sort of vengeance on him for having cried off from his affaire with her."


"Good God!" he exclaimed. "She must be mad to have done such a thing!"


"I think she is, poor soul! Never more so than when she tumbled head over ears in love with Byron! For my part, I was so unfashionable as to take him in instant aversion. How she could have borne with his insufferable conceit, and the airs he put on to be interesting, I know not - though I daresay if one could bear that dreadful Lamb laugh nothing would daunt one! Not but what I am extremely sorry for William Lamb, laugh as he may! If it is true that he stands by her, I do most sincerely honour him. I fancy she met to portray him in a kindly way, but some of the things she writes of him may well make him writhe. She is so very obliging as to favour the world with what one can only take to be a description of her own honeymoon - so warm as to make poor Fanny blush to the ears! It can't be pleasant for William Lamb, but it won't harm him. For she portrays herself, in the character of Calantha, as an innocent child quite dazzled by the world, quite ignorant, wholly trusting in the virtue of every soul she met! Pretty well for a girl brought up in Devonshire House!"

Needless to say, after reading the above, I felt I had knew enough of what sounds here like little more than a tabloid written by a spoiled girl in midst of a temper tantrum.

It is one of Heyer's great appeals to a Janeite that she ventures so far beyond the world of Austen. Pamela Aidan is another author to vividly portray the world of the ton in her Fitzwilliam Darcy, Gentleman trilogy. After Heyer, it is Aidan's representation of Lady Caroline Lamb in the first book, An Assembly Such as This, that has most determined my negligence of her, for here she is an object of Fitzwilliam Darcy's abhorrence (I shudder at the thought):


A private entrance to the room lay open to Darcy's left, and from its secrecy he saw emerge the tawny-crowned person of Lady Caroline Lamb on the arm of a gentleman quite unknown to him. From where he stood he could see only her face, her delicate chin raised high, her eyes glittering in amusement and daring. As she and her companion made their way through the throng, it parted before them, and Darcy noted more than a few faces of both ladies and gentlemen color and turn away from the procession.


Suddenly, an older woman sank in a faint, the gentlemen nearest to her crying out in dismay. Several young ladies followed her example, and soon the floor was littered here and there with insensible females being coaxed into consciousness by alarmed young men who, nevertheless, craned their necks to catch another glimpse of the source of the uproar. More than a few women were being propelled from the room by insistent husbands or fathers amid shouts for carriages and cloaks.


"What the devil is going on?" Darcy demanded of the chaos around him. Dy tugged at his sleeve and solemnly pointed back down the room to where Lady Caroline and her swain had finally broken free from her mother-in-law's guests. Darcy's draw dropped in disbelief while his own face flooded crimson.

I felt the need not to include more, so as to not ruin the story for those unfamiliar with it, but you can see from this excerpt how the lady could make a poor impression. On a side note, I just read Ms. Aidan's contribution to Jane Austen Made Me Do It, entitled "The Riding Habit", and enjoyed it very much.

So compelled by Erickson, I now feel the need admit my prejudices and, in atonement, to reevaluate Lady Caroline. If she continues to hold my interest, you will be sure to hear more of her soon.
Posted by Alexa Adams at 1:46 PM