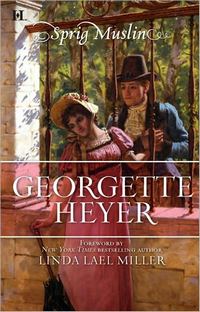 It has been a sick week in my house. First the baby had a fever, then a cold, and while I caught the fever, my husband caught the cold. We are very thankful to be able to share that burden rather than both suffering each ailment. The familial convalescence sent us scurrying for some light reading, and we ended up rereading Sprig Muslin by Georgette Heyer. I enjoyed the book far more this second time around than on the first read, and so I guess it is fortunate I had not previously reviewed it.

Sprig Muslin follows a variety of traditional Heyer conventions; the action takes place in the country, primarily in a series of inns, and the Corinthian hero struggles to keep a volatile young lady in line while falling for a mature heroine. No one, least of all her father and his sister, understands why Sir Gareth Ludlow would propose to Lady Hester Theale, "A woman who has been on the shelf these nine years, and more, and never took, or had countenance, or the least degree of modishness". Even more puzzling is why she would refuse such a wonderful offer. When Lady Hester tells her father of this decision, I was reminded of Sir Thomas Bertram's interrogation of Fanny Price following her rejection of Henry Crawford, only here the effect is almost Kafkaesque in its absurdity:


"Well, I don't scruple to tell you that I never thought to see such a piece of good fortune befall you, Hester! To think that you should make a better match than any of your sisters, and at your age, too! It is beyond anything great!"


"Beyond anything - oh, beyond anything!" she said, in a queer voice. "And he is coming here, with your consent! Could you not have asked me first what my sentiments were? I do not wish for this splendid match, Papa."


He looked as though he could hardly credit his ears. "Don't you wish for it?" he repeated, in a stupefied tone. "You must be out of your senses!"

"Perhaps I am." The ghostly smile that was at once nervous and mischievous again flitted across her face. "You should have warned Sir Gareth of it, sir. I am persuaded he cannot wish to marry an idiot."


"If," said his lordship awfully, "you fancy that that is a funny thing to say, let me tell you that it is not!"


He eyed her in uncertainty, feeling that in some strange way she was eluding him. She had always been an obedient, even a meek, daughter, but he had several times suffered from the uncomfortable suspicion that behind the cloud of gentle compliance there existed a woman who was quite unknown to him. He saw that it behoved him to tread warily, so he curbed his exasperation, and said, with a very fair assumption of paternal solicitude: "Now, what maggot has got into your head, my dear? You won't tell me you don't wish to be married, for every female must wish that!"


"Can it be that you dislike Ludlow?"


"Well, I was sure of that! I daresay there isn't a better liked man in England, and as for you ladies - ! The caps that have been set at him1 You will be te envy of every unmarried woman in town!"


"Do you think so indeed, Papa? How delightful that would be! But perhaps I might feel strange, and unlike myself. It wouldn't be comfortable, not to be acquainted with myself."


This baffling and (he considered) very nonsensical observation threw him out of his stride, but he persevered, saying with as much patience as he could command: "Well, never mind that! To be sure, I never thought he was trying to fix your interest, but I am sure I have seen him stand up with you at balls a hundred times! Ay, and sit talking to you, when one might have supposed that he would have been making up to one of the beauties that have been hanging out lures to him for ever!"


He began to feel uneasy. It was impossible to read her countenance. It was mournful, yet tranquil; but in the tone of her vice there was an alarming note which recalled to his mind her contumacious behavior when he had disclosed to her the only other offer he had ever received for her hand. He remembered how meekly she had borne every manifestation of his wrath, how dutifully she had begged his pardon for disobliging him. That had been five years ago, but here she was, still a spinster. After eyeing her for a moment or two, he said: "If you let this chance of achieving a respectable alliance slip, you are a bigger fool than I take you for, Hester!"


Her eyes came round to his face, a smile quivered for an instant on her lips. "No, how could that be, Papa?"

As Sir Gareth journeys to Hester's home in order to make his already rejected proposal, he comes across an obviously genteel and extremely beautiful young lady, of schoolroom age, attempting to obtain lodgings for the night. As Amanda is unaccompanied and carries nothing but two band boxes, the landlord attempts to reject her as undesirable, but then Sir Gareth steps in. Determined to return her to her family, whose name she will not reveal, Sir Gareth carries Amanda to Lady Hester, not willing to leave her unattended. Thus begins the great adventure that Amanda leads her two self-appointed protectors upon. It is a convoluted tale, chock full of improbable occurrences, that culminates in absolute hilarity. The last few chapters of the book are priceless. It was the perfect sickroom read.
Posted by Alexa Adams at 1:38 PM