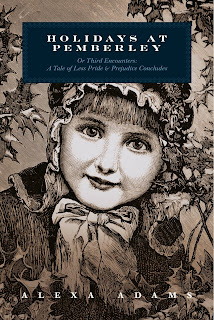 The problem is I'm beginning to fizzle out, which is why I'm writing this blog post instead of plugging ahead. Perhaps the sharing of another, extremely rough excerpt will evoke more words of encouragement from my kind readers, giving me the final push I need to complete the novel. It is by far the most complicated story I have ever written, and I sincerely hope it will be my best book yet!

The following, unlike the previous excerpts I've shared, is from the beginning of the story, when Darcy is grappling with whether or not to enter the private asylum called Ramsey House. I'd love to hear you comments! Thanks for reading!

Mr. Darcy was forced to face that truth later that evening. Only an hour two after finally, following a length struggle, falling asleep, he woke up, as he so often did, haunted by specters from his past.

He rose and drew on his dressing gown before opening the door to his room in order to examine the clock in the outer chamber. Normally, on such occasions when sleep was impossible, it was his habit to roam the estate, but tonight the pile of clothes left in waiting by his obliging valet for just such an occasion held no interest for him. He lit a candle and looked to the clock. Three am. No one should be about the house anymore, but he still looked out into the hallway before exiting his room, checking in both directions before making his way hastily to the large gallery, filled with family portraits, one floor down, almost immediately beneath the family quarters. He thought darkly on this arrangement, for it was as if his entire ancestry was buried beneath his bed, where he could always feel the force of their expectations and his failures.

Upon entering the gallery, he lit a lamp and began to walk slowly down the length of the room, stopping to study each of his ancestors in turn. There was his great-great-great grandfather, William Darcy, who united his estate of Pembor to the neighboring Waverly through marriage to the sumptuously dressed lady hanging on his right: Elizabeth Hollingsworth. Thought a beauty in her day, the image of the first mistress of Pemberley, in her large collar and enormous skirts, had terrified Darcy since his boyhood. He no longer shielded his eyes from her sharp gaze as he passed her, but she still seemed to cast an aura of menace. He used to dream she was roaming the estates decapitated, with nothing but a disk of starched lace where her head should be. Though she had died a peaceful death at a respectable age, this did not keep her from haunting him. Tonight he stared at her closely, imposing her headless image on the portrait in his mind’s eye, amusing himself with the thought that she seemed a bit more becoming without the appendage.

Next was their son, Edward Darcy, pictured first as a young man, with another likeness directly to it, done many years later and in company with his wife and three children. One of the boys, Thomas, he thought was his name was, died of some illness or another. If he had survived, the two estates would have been split into two once more. Though still in the same family, instead of melding more and more into one, indistinguishable unit, by his own time there would exist only a distant connection, and he would certainly not be the possessor of such a fine estate..

The the remaining heir’s name was William, and he was Darcy’s great-grandfather. He had two children, an elder boy and younger girl, establishing a tradition of sorts, as the next two generations following him bred in precisely the same manner. Darcy thought what a coincidence it was, and wondered fantastically if other children were forcibly prevented, in an attempt to preserve such a convenient dichotomy. His grandfather and father both married heiresses, and their fortunes were freely invested in the estate, always growing and improving, for their was never an abundance of heirs for which to provide. Darcy came to his father’s portrait and looked at it warily. What would his father think of him now, the destroyer of the work of so many generations?

He had failed his duties in every sense of the manner. First and foremost, he had not provided an heir to the estate, passed down so seamlessly for so long. He had once thought Georgiana would have a son, alleviating him of the responsibility. He might have been given the name Dracy, or taken it later in life, and the regular visits of this imaginary nephew, come to learn the management of the estate, would have saved his life from the lonely desolation into which it had sunk. But then Georgiana died, horribly and childless. He had failed to protect her. It didn’t matter how many times he tried to convince himself that she had become her husband’s responsibility, he could not shake the feeling of guilt in her regard. The way in which her life was taken made it all the more horrible. Her widower was not so guilt ridden. Not three years after her passing, he was married once more, and he now had three children and an idyllic family life to show for it.

Darcy knew at the time that he had a duty to find a suitable woman and marry her, with or without the love he had once hoped to share with Elizabeth Bennet, but Georgiana’s death bore down upon him, crippling his will. He had already gained the reputation of being a recluse, but when the official mourning period was more than complete, he tried to force himself through a London season, in hopes the effort would produce an acceptable wife. He attended one ball and then fled for the comfort and security of Pemberley. He had not been seen in society since.

Perhaps it was not too late? Perhaps Sir Frederick really could help him? He looked at his father’s face again and began to laugh wildly. What would he say to his son being committed to a mad house? He would think it even more horrifying than what he had done to poor Wickham, and that was taking into account his affection! No, what his father cared for above all else was family pride and honor. He had seen himself as the embodiment of his heritage, and he tried to raise his son to be the same way. What a wasted effort!

He looked to his mother, bewigged and bonneted in the fashion of the last century, and thought of her sentiments on the notion. They would be just like those of her sister, Lady Catherine, though spoken more softly. Both his parents would shun him if they were alive, their embarrassment at how low he had sunk a source of incessant pain. Oh! Something could certainly be worse than a madhouse. At least he had only their portraits to confront, still and silent, instead of the shame of living and breathing judges. He started laughing again, but the harsh chortles quickly dissolved into weeping, and he fell to his knees before his parents images, crying with hopeless abandon. He could sink no further. There was no pride or dignity left to lose, and then there was that name, Bennet, which seemed to be calling him away from his decade’s seclusion at Pemberley. He would go to Ramsey House, if only for the vague stirrings the name conjured. What else had he left to lose?

Missed the previously posted excerpts from The Madness of Mr. Darcy? You can read the first conversation Mr. Darcy and Elizabeth Bennet have in the book here, and a scene from almost the end of the book here.
Posted by Alexa Adams at 9:10 AM