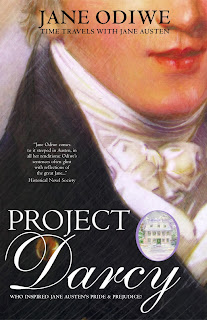 A new Jane Odiwe novel is always a cause for celebration. I have loved everything she has done. Her books combine a deep affection and respect for Jane Austen with a unique vision of what her world looked like, a perspective born of Ms. Odiwe's experience of the physical location associated with Austen and her work as an artist. The result is vivid:


I ran through the glittering garden, past the sundial and the rose beds, where rosy blooms were crumpled like crushed paper in the heat. Along with the pink bricks of the walled garden scented with apricots, I ran my fingers along the roughened surface, not stopping to pick the sweet strawberries lying below in their straw bed nests, and as last I saw him. I could see his white head as he sat at his desk by the window. There were piles of dusty books and yellowed papers on every side of him, and I knew his fingers would be stained black with ink as he corrected his accounts or marked his scholars' work. I knew before I reached the house that the room he occupied would be wreathed in sweet-scented pipe smoke, just one ingredient in the magical elixir that conjured up his special smell. Gilt-edged books, paper and ink all had their own aroma as dear to me as any exotic perfume from India, and were as much a part of him as the glass of Madeira that he took in the evening, and his own cologne of bergamot, neroli and lavender. I could not reach him quickly enough, and at that moment he seemed to sense my presence and looked up to wave and smile. I waved back, my heart filled with love.

I ran into the house, dark and cool after the sunny day outside to find him still busy with his books. I brought the smell of outdoors with me and knew I loked like a wild child with leaves in my hair.

"Little Jenny, you have had a very busy afternoon, I think. Those grass stains tell a certain tale."

I hung my head waiting for him to scold me, but I should have known better. He simply laughed and held out his arms to me.

The place is Steventon Rectory, and the girl is Jane Austen. Like Ms. Odiwe's previous book, Searching for Captain Wentworth, Project Darcy is a tale of time travel. This time, instead of the heroine inhabiting the body of someone who knew Jane, she becomes the author herself.

Five modern college students sign up as volunteers for an archeological dig (code named Project Darcy) at the site of Steventon Rectory. They are female roommates, and their personalities are modeled on the Bennet sisters. Our heroine, Ellie, has had intuitive experiences of the other worldly before, but as soon as she arrives at Ashe Rectory, where the girls are housed during the dig, she sees a young man dressed in Regency garb. The ghost proves to be Tom Lefroy, and Ellie begins to have episodes where she travels back to the time when he and Jane fell in love.

Much has been made of Austen's romance with Lefroy, most of it conjecture, but Ms. Odiwe's rendition coincides nicely with the facts. Her research into Austen's letters and the locations depicted endow the entire novel with a believability usually lacking in such attempts. Yes, images from Becoming Jane were, at times, hard to repress, but the depiction of Jane is far more realistic. It was wonderful to indulge in her perspective, so beautifully constructed!

The parts of the book that take place in the past are so good as to outshine the modern story a bit. I enjoyed watching Ellie cope with her experience and explore her own loves, but it is when she is Jane that I completely lost myself in the tale. I admit to being somewhat surprise at how the story ended for Ellie, and even a little disappointed, if only because Ms. Odiwe intentionally toys with our expectations, playing on the Pride & Prejudice parallels. One the other hand, Jane's romance is remarkably satisfying, even with the inevitable end it must come to. Austen, as Ms. Odiwe portrays her, is strong and inspiring when she says goodbye to Tom, not tragic in the least. The reader is left feeling no heartbreak, only gratitude.

I must wonder if Ms. Odiwe has more time travel tales in store for us. It has never been a favorite genre of mine, but in Ms. Odiwe's hands, perhaps because she doesn't get bogged down in mechanism and explanation, I find myself entranced. Project Darcy brings to life the personal experiences Austen endured that may have inspired her most beloved novel, just as Searching of Captain Wentworth did for Persuasion. I do so hope the rest of Austen's novels will be tackled in their turn.

Read my thoughts on other works by Jane Odiwe by clicking on the links below:

Mr. Darcy's Secret
Searching for Captain Wentworth
"Waiting" from Jane Austen Made Me Do It
Willoughby's Return


This is my thirteenth review for The Pride and Prejudice Bicentennial Celebration 2013, hosted by Austenprose. Please see my others below:

The Darcys of Pemberley by Shannon Winslow

Return to Longbourn by Shannon Winslow
Posted by Alexa Adams at 11:36 AM