I failed to record the date for the original version of this post, but it was several years ago, at least. I've only updated this to reflect the most recent Emma adaptation, upcoming Persuasion adaptations, and to remove links now obsolete. I continue to celebrate these old, very close to canon adaptations. Enjoy! 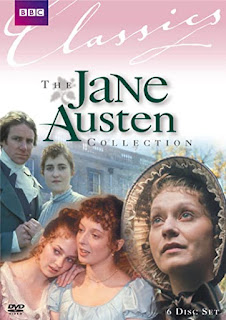 I have long championed the old BBC Austen adaptations, produced in the 70s and 80s. I was so fortunate as to receive the pictured box set several years ago as a Christmas gift, and since I have watched these films time and time again. Now, if you require beautiful cinematography and have no tolerance for this style of old, made for TV literary adaptation, which admittedly tend to be long, move slowly, and are hampered by unfortunate production quality, then no amount of praise from me will help you find enjoyment in these movies. You will lose your patience. But for me, it is precisely such attributes that make these versions feel a little more true to Austen. There is a quietness to the old adaptations, incompatible with the glossy and dramatic versions made over the last quarter of a century, that better conveys the atmosphere of her books. Not that I don’t adore the newer movies – they’re (mostly) phenomenal – but these are excellent too, and should not be forgotten. In some cases, I have yet to see a version I prefer. So here is a brief intro to each film. When I’ve written them, I’ve included links to full reviews.

I believe Sense and Sensibility translates to film particularly well, and all the versions I have ever seen of it are quite good. I’m not sure why this version was included in the box set instead of the 1971 version (it features Joanna David as a wonderful Elinor, familiar to Janeites from her portrayal of Mrs. Gardiner in Pride and Prejudice 1995, and a fabulous performance by British TV icon Patricia Routledge as Mrs. Jennings). Both versions leave out Margaret Dashwood entirely out of the script, which I do find irritating.

The 1981 adaptation stars Irene Richards as Elinor Dashwood (also Charlotte Collins in the 1980 Pride and Prejudice), Marianne is played by Tracey Childs, Bosco Hogan is Edward Ferrars, and Robert Swann is Colonel Brandon. Julia Chambers is fabulous as Lucy Steele, but my favorite performance by far is that of Amanda Boxer, who portrays Fanny Dashwood. Throughout the film, she is odiously smug and collected, and to see her let loose on Anne Steele (Pippa Sparkes) is hysterical. Often film makers forget that Austen is, first and foremost, a comic writer, and I really appreciate it when they pay homage to her love of absurdity and amusement in human folly. 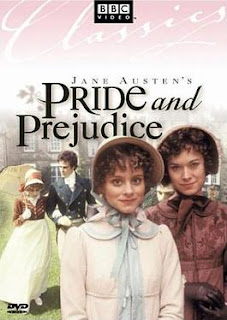 I think it is fair to claim that this is the most beloved film in the collection. Many Janeites continue to prefer this version of Pride and Prejudice to the more acclaimed, recent versions. I think that’s because Elizabeth Garvie is so good as Elizabeth Bennet, and David Rintoul, while a bit stiff, just looks perfect as Darcy. Also, because the story has been less, um, sensationalized (no wet shirts here), it's definitely the cosiest of the Pride and Prejudice adaptations available. Tessa Peake-Jones is my favorite Mary Bennet. 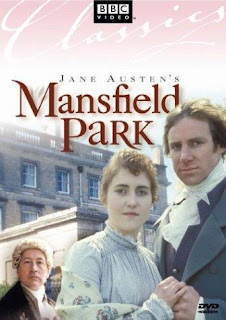 This is easily my preferred Mansfield Park, and that alone is enough to make it my favorite film in the boxset. There are only three versions of Mansfield Park, and both the more recent films make the fundamental mistake of trying to fix the novel. This is the only one that honestly attempts to capture the true story, and Sylvestra Le Touzal (who also played Mrs. Allen in the excellent 2007 version of Northanger Abbey) is the only actress to have portrayed the real Fanny Price on screen. She is supported by Nicholas Farrell as Edmund Bertram. Bernard Hepton is Sir Thomas (he was also Mr. Woodhouse in Andrew Davies’ 1996 Emma), Anna Massey is a fabulously awful Aunt Norris, and Angela Pleasence is spectacular as Lady Bertram. This one is "must see." 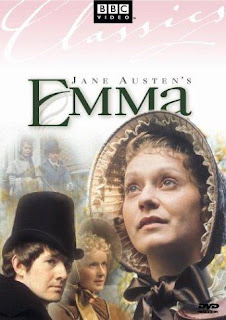 I really love this one, despite the fact that I think all four of the more recent versions of Emma are better. For whatever reason, I’ve consistently watched it more often than the other films in the boxset. Part of it, I think, is that like Sense and Sensibility, Emma works very well on film. Highlights of this version include Mollie Sugden (best known as Mrs. Slocombe on Are You Being Served?) as Mrs. Goddard, and my favorite Mr. Woodhouse, Donald Eccles, who is fabulously nervous. Emma is convincingly portrayed by Doran Godwin, and Mr. Knightley is very well captured by John Carson.
Mrs. Elton (Fiona Walker), like every other Mrs. Elton, is awesome. For some reason I do not fully comprehend, Austen's awful ladies translate really well to film. 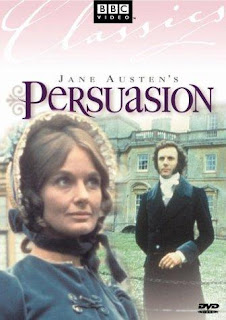 This is my favorite Persuasion adaptation. It isn’t perfect, but unlike both more recent versions, it does not rely on Austen’s cancelled chapters of the story for plot. This really bothers me. It pains me there isn’t a better, yet still accurate, film adaptation of my favorite Austen novel, but I am cautiously hopeful that the upcoming Netflix version will not fall into this trap. In the meantime, when I want to watch Persuasion, this is my go to, simply because it causes the least frustration. Anne Elliot is played by Ann Firbanks and Bryan Marshall is Captain Wentworth, though it appears to be Robert Swann – Col. Brandon from Sense & Sensibility – on the DVD cover. Such quirks, I suppose, are part of the experience. 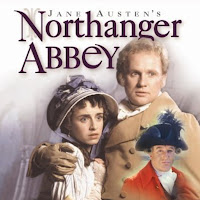 Easily the strangest Austen adaptation ever made, the 1986 version of Northanger Abbey doesn’t really fit with the other films in this boxset. It is by far the shortest (only 78 minutes), and it wildly diverges from the novel, playing up its gothic aspects. A source of both outrage and fascination for fans, it is something you should really see at least once, if for no other reason than to join the debate. Also, Northanger Abbey has only ever been made into a movie twice. For those long horrified by this version, the 2007 film is so magnificent that they might like to forget this one ever existed. I think that’s a mistake. Especially now that we have a much more accurate adaptation to cling to, I can appreciate this film for just being so darn bizarre. Catherine Morland is played by Katharine Schlesinger, Peter Firth is Mr. Tilney, but most memorable are the skin crawling duo of Cassie Stuart and Jonathan Coy as Isabella and John Thorpe. If you thought they were bad in the book, they are absolutely revolting here. The 80s-gone-18th century coiffures are marvelously awful. Actually, the whole film might be worth watching for the crazy head gear alone. It's so bad, it's good.

Have you seen and enjoyed (or hated) these films? I’d love to read your thoughts. Do share them.
Posted by Alexa Adams at 6:00 AM