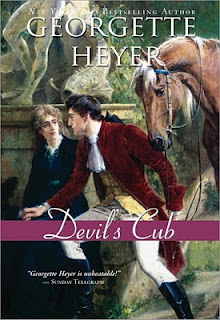 Having created such memorable characters as the Duke of Avon and Leonie (read yesterday's review of These Old Shades here), Heyer must have felt it was imperative to return to them. Particularly, the question of what the child of these two would end up like just burns to be answered. Lord Vidal, the Devil's Cub, is a highly believable response. He has all the sinister aspects of the Duke combined with his mother's volatility, making him an extremely dangerous character. When I first read this book, I admit to being rather disappointed in him, as the suavity that makes the Duke so appealing to me is completely lacking in him, but upon this second read I found him to be the obvious result of his tempestuous parentage. I still prefer These Old Shades to Devil's Cub, but the latter book has grown on me, and as it incorporates a strong dose of Avon and Leonie in it, in all their glory, it cannot but satisfy the need for more of these most fascinating creatures. As the comments on yesterday's post reminded me, many readers prefer Devil's Cub over These Old Shades. I am inclined to attribute this phenomenon to the far more comic nature of the second story. Vidal, though not so smooth, is also not nearly so cold and calculating as his father, and I imagine this makes him more endearing to many.

The story begins when Lord Vidal, en route to a party, kills the highwayman who was foolish enough to stop his coach. His character is appropriately conveyed by the fact that he leaves the body on the road, proceeding on his way to the festivities without giving the slaughter a second thought. I love this scene in which Lady Fanny (Avon's sister) discusses the incident with his parents:


"Monseigneur, Dominique has shot a highwayman!" Leonie said, before Fanny had time to speak.


His Grace of Avon came slowly to the fire, and stretched one thin white hand to the blaze. He carried an ebony stick, but it was noticeable that e leaned on it but slightly. He was still very upright, only his lined face showed his age. He wore a suit of black velvet with silver acing, and his wig, which was curled in the latest French fashion, was thickly powdered. His eyes held all their old mockery, and mockery sounded in his voice as he answered: "Very proper."


"And left the body to rot on the road!" snapped Lady Fanny.


His grace's delicate brows rose. "I appreciate your indignation, my dear. An untidy ending."


"But not at all, Monseigneur!" Leonie said practically. "I do not see that a corpse is of any use at all."


"La, child, will you never lose those callous notions of yours?" demanded Fanny. "It might be Vidal himself speaking! All he would say was that he could not bring a corpse to the drum. Yes, Avon; that is positively the only excuse he gave for his inhuman conduct."


"I did not know that Vidal had so much proper feeling," remarked his grace. He moved towards a chair and sat down. "Doubtless you had some other reason for visiting us to-day - other than to mourn Vidal's exploits."


"Of course, I might have known you would uphold him, just to be disagreeable," said Lady Fanny crossly.


"I never uphold Vidal - even to be disagreeable," replied his grace.

The plot unfolds with Vidal's family expressing concern regarding his latest flirt - the beautiful, silly, and vulgar Miss Sophia Challoner - as, while her bourgeois origins (and, more importantly, behavior) mark her as thoroughly beneath him, she is just elevated enough to not be trifled with. As with everything else, Vidal disregards society's rules in this matter, and upon being forced to flee the country after a rather disastrous (and, more importantly, inappropriately conducted) duel, he convinces Sophia to run away with him. Getting wind of the plan, her older sister, the far more refined and well-bred Mary, takes the rather drastic step of masquerading as her sister, in hopes that when Vidal discovers the deception he will abandon all thoughts of Sophia. Little does she calculate that, upon discovering himself crossed, he will make off with whatever lady happens to be available. What he didn't bargain for was that Mary, despite all appearances, is precisely the lady he swore he could never find: one with as much gumption as his mother.

I do not want to spoil any of the riotous events in this novel, but I will disclose that the entire family ends up cavorting around France, an extremely gratifying circumstance, as it so wonderfully recalls the action of These Old Shades. Generally I find Devil's Cub to be far more reminiscent of the majority of Heyer's books than its predecessor, and it is sure to please anyone who ventures upon it, even if they have not read These Old Shades. Nevertheless, I highly recommend reading all the Alastair books (including The Black Moth, which I reviewed on Tuesday, although it is not technically part of the "Alastair trilogy") in order. Though my husband and I did not venture to reread it last week, and so I will not reviewing it at this time (though I did previously comment on the entire saga - read that post here), An Infamous Army is the next book, following the affairs of Vidal and Mary's granddaughter in Belgium during the Battle of Waterloo. Just a reminder that, before proceeding on to this epic historical novel, one should also read Regency Buck first (which I previously reviewed here), as its characters also play pivotal roles in the action.
Posted by Alexa Adams at 7:00 PM