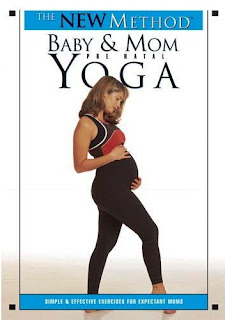 How's that for a bizarre post title? It was inspired by a new prenatal yoga workout I have just discovered this week. I do a lot of yoga, generally, so as soon as I found out I was pregnant I rushed to find the prenatal workouts produced by my favorite yoga instructors, as both a way to stay in shape during my pregnancy and as a means for staying calm and reducing nervousness (which I admit to feeling a lot of, especially after the two miscarriages I had last year). Although I have long enjoyed the workouts by Gurmurk, which are Kundalini focused, I didn't think to look for a prenatal workout of this kind, assuming that yoga during pregnancy needed to be calmer and less energetic. It was by accident that I found The New Method: Baby and Mom Prenatal Yoga workout on Netflix and decided to give it a try after reading in the description that Gurmurk was the instructor. Wow! This is exactly like her other workouts, incorporating far more movement than the other prenatal yoga workouts I have found, but with such an incredible internal focus on the changes the body is experiencing and preparing for. I imagine it wouldn't be everyone's cup of tea, as there is a lot of chanting and spirituality incorporated, but I just adore it. I am ordering my own copy today.

So what on Earth does this have to do with Miss Austen? Just the associations I make between almost everything and her books. In this case, during shavasana (the final relaxation, for those unfamiliar with yoga, that every yoga session should end with), Gurmurk speaks about the importance of relaxing the tongue. She says, "If our tongue stays relaxed, our whole body is relaxed. When our tongue is tight, we usually make not great food choices, and we often talk about people." Now this may seem like new age mumbo jumbo to many, but it brought to my mind Mrs. Bennet, followed by the many other gossips in Jane Austen's novels: her sister Mrs. Philips, Caroline Bingley, Mrs. Norris, and Miss Bates. It made me feel so sorry for these women (yes, even Miss Bingley and Aunt Norris), for when you consider Gurmurk's words, you have to reflect on the sad mental and emotional state a person must be in to malign others. I can't say much about Mrs. Philips, as she is not developed enough to fully reflect upon, but the rest of these women all suffer enormously. Mrs. Bennet is subject to her own worries about the entail and guilt at not having produced an heir, as well as Mr. Bennet's undermining and dismissive attitude towards her. Caroline Bingley is the product of her family's ambition and her failure, despite the best schools and opportunities, to secure a socially elevating husband. Mrs. Norris is a complete basket case. We can suppose her marriage to have been unfulfilling, and her lack of children has left her without an outlet for her massive energies. I also often imagine that she was rather jealous, in a way, of her youngest sister, as she married for love, and took a very painful form of glee in that union proving so miserable, hence her viciousness towards Fanny. As for Miss Bates, by far the most endearing of the ladies mentioned, she lives a lonely life - unmarried, the caretaker of an aging mother - but it is Mr. Knightley who describes her trials best: "She is poor; she has sunk from the comforts she was born to; and, if she live to old age, must probably sink more." Subject to the insecurities resulting form financial instability, it is really a wonder that Miss Bates is so very pleasant a lady, and the tongue that endlessly wags in her mouth is a comfort we can easily forgive her for indulging in. It is also telling that when Emma mocks poor Miss Bates on Box Hill, it is under the tension of that gathering, when both she and Frank Churchill are so obviously indulging in fits of nervous energy. Sometimes an outside, totally unrelated source, like Gurmurk, allows me to contemplate and shine clarity on a new aspect of Austen's work, that I have some how failed to consider despite countless readings. Such insights allow me to not only understand Austen better, but also leverage the knowledge I gain from her to help me be a better person. I just felt the need to share with you this most recent revelation.
Posted by Alexa Adams at 9:55 AM