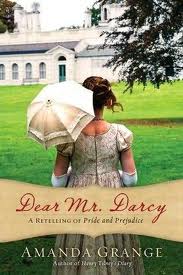 We have discussed epistolary novels before, as I find them quite charming. I never have done a proper post on Lady Susan, a sad oversight, but I have reviewed Letters from Pemberley and More Letters from Pemberley by Jane Dawkins, as well as My Dear Charlotte by Hazel Holt. When I first learned that Amanda Grange had rewritten Pride and Prejudice in letters, the form in which most suspect it was originally composed, I immediately determined to read it, but if I had not won a copy on Austenesque Reviews, it probably would have been sometime before I found the time, my opportunities to read being so curtailed these days. I have to be very selective about which books I most want to read, unlike those carefree times when I was able to consume several novels a week, and I tend to favor those by my favorite authors. Ms. Grange, alas is not a favorite with me. I read most of her Diaries when I first discovered JAFF, they being some of the few volumes I could find on bookstore shelves, and I enjoyed them well enough. It was Mr. Darcy, Vampyre that turned me away from Ms. Grange, and while I've felt some desire to check out Mr. Wickham's Diary, it has not been strong enough for me to overcome the lingering distaste. Dear Mr. Darcy, on the other hand, was tempting enough that it would have been read, sooner or later. I am pleased "sooner" won the day.

This story begins well before Jane Austen's at the time when Fitzwilliam Darcy's father is dying. The extended timeline reflects Ms. Grange's desire to expand upon the original story, and she creates a convincing tapestry of characters to act as correspondents, enriching the familiar tale with their perspectives. There is a Darcy cousin, Phillip, who is even more stringently against shade pollution than Lady Catherine; an entire Bingley family of vulgar tradesmen, shining new light on Caroline's behavior; and a Mr. Parker, Mr. Wickham's companion in debauchery. Perhaps my favorite is the Sotherton family, the owners of Netherfield who are forced to retrench to Bath due to the father's gambling habits. The three daughters of the family act as correspondents to the Bennet girls: Lucy and Mary try to rationalize the guilty pleasure of Gothic novels with imposed morality, Eleanor sympathizes with all of Kitty and Lydia's pursuits, while Susan is the sole friend in whom Elizabeth completely confides. Susan also corresponds with Charlotte Lucas, and the triangle of female friendship thereby created is excellently portrayed. For example, Charlotte writes to Susan:


I have told Elizabeth that she should use her influence with Jane and advise her sister to show more interest in him, but Elizabeth is romantic and thinks that Jane needs more time to truly understand Mr. Bingley's character. I cannot agree with her.

Then Elizabeth writes to Susan:


Jane's evening was even more satisfactory than mine, as Mr. Bingley continued to pay her attention of the most particular kind.
I truly believe he is falling in love with her, and he is so agreeable that I think he might even be worthy of her.

And Susan responds to Elizabeth:


I think Charlotte is right, Lizzy: if Jane likes him, she should encourage him. Jane has always been of a calm and equable temper and, not knowing her as we do, he might mistake gentleness for indifference.

Is this not precisely how female relationships work? I had almost the same conversation with my mother and sister just last week, only the topic in our case was how to adapt to living with a man. My mother took the part of Charlotte, my sister was Lizzy, and I had the pleasure of being Susan.

I was less thrilled with some of Ms. Grange's other creations. Phillip Darcy held me fascinated, but when I most wanted to hear from him, right after Darcy and Elizabeth become engaged, Ms. Grange had already confined him to silence. The Bingleys also bothered me. I had always assumed they have to be a generation or two removed from their trading roots, but Ms. Grange makes their father the fortune maker, harnessing them with a mother who makes Mrs. Bennet look refined and a brother still running the business. While I found this portrayal amusing, it cannot be believable, for the Bingleys would have been unable to mix with London society in the degree they do if their ties to trade were so immediate, Mr. Bingley's fortune not being large enough to buy the Ton's acceptance. I also had to suspend my sense of reality in order to accept Ms. Grange's development of Mrs. Younge, known to Wickham and Mr. Parker as Belle, whom she makes her out to be a courtesan. Unfortunately, the unconvincing explanation offered for how such a person could end up in Mr. Darcy's employ doesn't quite cut it. At least not for me.

Minor qualms aside, I think Ms. Grange deserves a great deal of credit for the complexity of this undertaking. The resultant story is pleasurable, authentic in tone, and respectful to Austen's original tale. It is, without doubt, my favorite book I have read by Ms. Grange. In fact, it is good enough to make me want to read another, even with my limited reading time. I think I'll go put Mr. Wickham's Diary in my shopping cart right now.
Posted by Alexa Adams at 2:38 PM