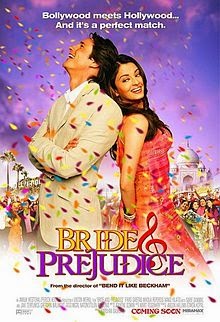 Emergency review! I was so certain I had already written a review for Bride & Prejudice, until I started looking for the darn thing to use in my next Austen Authors post, due out in less than 12 hours. What else to do but hurry up and rewatch this delightful take of Austen's most beloved novel? I think this is the forth time I have seen it, and I like better each time. It really is a well done adaptation. That being said, it's not a great Bollywood film, and I do love my Bollywood. Maybe that's because it isn't really a proper Bollywood film but a Hollywood take on one, packed with some of the most recognizable Indian faces for a western audience. It is ironic (or perhaps self-aware) that the film puts a post-imperialist message at it's core, providing the barriers to romance that socio-economics play in the novel.

Lalita: You said yourself you are used to the best. I'm sure you think India is beneath you.

Darcy: If I really thought that, then why would I be thinking of buying this place.

Lalita: You think this is India? (indicates her surroundings, a luxury hotel swimming pool)

Lalita: Yes, but who does it really benefit? You want people to come to India without having to deal with Indians.

Darcy: Oh, that's good. Remind me to add that to the tourism brochure.

Lalita: Isn't that what all tourists want here? Five star comfort with a bit of culture thrown in? Well I don't want you turning India into a theme park. I thought we got rid of Imperialists like you.

The choice of Aishwarya Rai to play Austen heroines continues to astound me. This is, after all, one of the most beautiful women on the planet, let alone Bollywood royalty. Yet you forget that she is far too pretty to be an Austen heroine as she makes each role entirely her own, proving her acting ability well surpasses even her startling beauty. Let's think about this from a western perspective: how do you cast Angelina Jolie to play anyone's less attractive younger sister? Crazy, right? But Aishwarya is awesome as both Lalita Bakshi (and let's face, who else has such fine eyes?) and as the Marianne Dashwood character, Meenakshi, in 2000's Kondukondain Kondukondain (read my review here), Meenakshi. 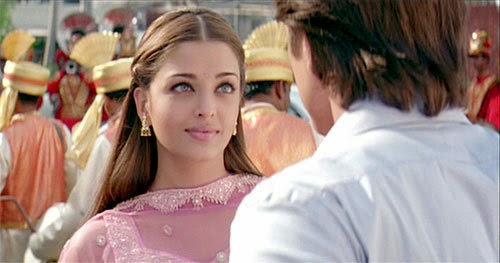 The film is mostly really well cast. Anupam Kher has made a career out of portraying fathers, and his Mr. Bennet/Chaman Bakshi is thoroughly lovable (sorry, but I can't mention him without noting he played Shah Ruck Kahn's father in Dilwale Dulhania Le Jayenga, one of the most beloved Bollywood films ever and a personal favorite). More in keeping with Austen's original characters is Nadira Babbar as Mrs. Bennet, or Manorama Bakshi. Maybe one of my favorite characterization, however, is Caroline Bingley, or Kiran, played by Indira Varma (who might be more immediately recognizable to readers as Ellaria Sand in Game of Thrones). Kiran is a much gentler Miss. Bingley. As she does not suffer the same social insecurity as the original, she is not desperate to trap Darcy in marriage. Jealousy for Lalita does not dominate (or even define) her character. Rather she comes off as a extremely spoiled party girl. Yes, she's an ice queen, but she is actually rather fun at a party. I enjoyed this less catty interpretation, despite the departure from canon.

There are only four Bakshi sisters (poor Kitty was once again overlooked). One of the funniest scenes is the Mary figure's performance of "the cobra dance" (played by Meghna Kothari), and one of the most uncomfortable scenes is a song and dance number performed by the sisters called No Life Without Wife, a weird cross between a 60's dance fad and Matchmaker Matchmaker Make me a Match. It is the worst of many bad songs in the film, but it immediately precedes a fun dream sequence that helps Lalita begin to understand her feelings for Darcy.

Now let's speak about William Darcy, an american hotel tycoon, played by Martin Henderson. I have heard other Janeites proclaim him their very favorite Darcy (even better than Mr. Firth!), but I am afraid I do not quite buy it. First of all, he is blond. A blond Darcy. It just doesn't work for me. Further, his portrayal comes off as pretty passive. The Wickham figure is actually staying in Lalita's house, and he doesn't have the gumption to warn her about him. He finally cuts the cord from his overbearing mummy and does the right thing, but it isn't enough for me. I want to like him better in the role, but I just can't. It's too awkward. 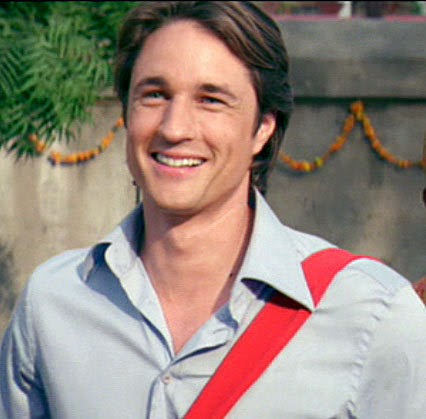 One more word on the music. I listen to a lot of Indian music, both from films and also kirtan music, and while I love it all, I have found it much more enjoyable when I do not know the translation. Perhaps it is then not unexpected that the English lyrics to the score of Bride and Prejudice are embarrassingly insipid. The numbers in Hindi are far more enjoyable, letting the audience get lost in the massive choreography and fabulous costumes, but oh! the pain of the English songs! So very, very bad.

All and all, Bride and Prejudice has a lot to offer the Janeite but maybe not so much for the Bollywood fan. A fun and silly adaptation. Take it for what it is and enjoy the absence of subtitles.

Sigh. So much for my strong blogging start to the year. I don't know how three weeks went by since my last, laughably short post. Wait - yes I do! I'm moving to Switzerland! Yeah, thats right! And I can think of almost nothing else. The first few months of the year are always sluggish for me in the best of circumstances, but now I'm finding it nearly impossible to keep my mind on the things I am supposed to be accomplishing. Fortunately, there are some kind souls out there looking out for me, even as I lag. First off, I need to extend great thanks and appreciation to any and all those who voted Mr. Darcy's Christmas Present, the best finished story on A Happy Assembly in December. Three months in a row I made the top 5 at jaffrecs.com! No hope for forth, as the Swiss thing totally killed any hope I had of finishing Being Mrs. Bennet last month. There is little hope for this month. Sigh again.

I also received a wonderful review of The Madness of Mr. Darcy from Jody at A Spoonful of Happy Endings last weekend. Please do check it out. She has a lovely blog.

There are reviews to write and stories to complete. Hopefully, one or two of the former will shortly be making their appearance here. I also need to prepare my second Austen Authors post for the end of the month. Thinking about doing it on Arrack punch, of Vauxhall fame.
Posted by Alexa Adams at 9:24 AM 2 comments