Streaming the Pride and Prejudice Musical 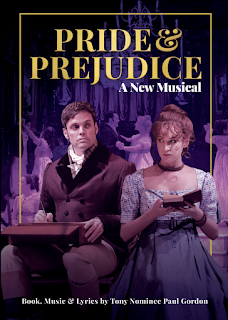 During the hard lockdown I only had very few, very precious hours to myself. I managed to luck into a couple when the Pride and Prejudice musical flopped hard with my husband and daughter, and I was abandoned to relish it alone. I didn't really mind.
A product of Tony nominee Paul Gordon and directed by Robert Kelley of TheatreWorks, I thought the 20 euros I spent to buy the production (you can rent it for 5) a great bargain. I’m thankful for the opportunity to see it at all, as I suffer from a dearth of english language theater here in Switzerland. Furthermore, this is a pretty well filmed play. Not all of them are. It takes a lot to overcome the limitations of the lense and replicate a theatrical experience. I was pleased by the result. Check out this gorgeous promo video:
I really liked the show, but as indicated, I’m the only one in my family who did. My daughter proclaimed it unbearable and abandoned me within ten minutes. My husband thought that sufficient justification to also bow out. So I got to watch the bulk of it from my bathtub (can’t do that during a live performance!), and while I thought the beginning was a bit weak, it grew on me as the story progressed. The music was good, if not particularly memorable. It very much reminded me of something else, and I couldn’t decide if it was more Joseph and the Amazing Technicolor Dreamcoat or Disney’s Descendants, oddly enough. I very much enjoyed the lyrics, and the dialogue, of course, was at its best when pure Austen. There are a few historical inaccuracies, but they are not the sort that would bother most viewers. I imagine a British audience might find the accents challenging, but from an American perspective, they are believable. The set also seems well-done, but I’m afraid this is one of the aspects of the theater that really suffers on film. It’s nearly impossible for the sets to achieve their full effect.

Before delving a bit into the individual performances, I must comment on the costuming. While I love everything about the theater (and have been known to force my family to sit through truly awful productions, just so I can soak in the atmosphere), my particular interest has always been costuming. It can make or break a show for me, and maybe the best part of streaming a production is being able to see the details in the garments all the better (why I usually spring for premium seats and bring opera glasses). I thought this production, in many ways, did a lovely job. With a period piece, costuming is pretty straightforward, or at least it should be. A thoughtful designer will either opt for historical accuracy or stylization. For the most part, costume director Jill Bowers and designer Fumiko Bielefeldt, adhere to the former aesthetic. Some of the designs are quite stunning, and bodices, sashes, and spencers are effectively utilized to alter looks between scenes. However, I did not like how they dressed Elizabeth (Mary Mattison). Her performance was great, and the costuming undermined it. It’s my biggest complaint about the show. I understand the desire for a designer to try and highlight their main character by using distinct colors and lines, thereby making them stand out from the rest of the cast, but the effect here, for me as a Janeite, was jarring. While everyone else is clothed in proper period prints and fabrics, Elizabeth’s two gowns both feature geometric designs, far more Art Deco than Georgian. The cut of her gowns is also strange, particularly the one from the first act, which has these very modern, unsupported panniers built into the sides. Oh, they bother me (you can see them much better in the video above than in my cruddy screenshots). I like the gown from act two much better, in no small part because it resembles a dress I have long owned and loved (not a costume, mind you – wouldn’t be caught dead trying to pass it off as period piece). I also adore the “cloak” she wears when walking to Neatherfield. It’s some kind of a cross between a redingote and a hoodie sweatshirt, and it’s AWESOME, just not on Lizzy Bennet. I attribute some of the responsibility to the 2005 film, which (in my opinion) made similar mistakes.
Most of the characters, particularly Elizabeth, are modernized, again in a manor somewhat resembling the 2005 film. I have mixed feelings about it, even as I understand the choice. The goal is to make the character more relatable, but for me, it’s just a ruder version of Austen’s original. Like her costumes, I found these interludes distracting from Mattison’s excellent performance. I also did not like the first solo song she sings, in which she repeatedly celebrates “I’m headstrong!” It’s better later in the show, reprised after Elizabeth learns that it’s not always such a great quality. Jane is also mouthier than her original, but I still thought Sharon Rietkerk captured the spirit of the character beautifully.
Mr. Darcy (Justin Mortellitit) is more at ease than one might expect, and we hear his internal narrative, which is probably the play’s biggest deviation from the novel. Although his early revelations regarding his feelings for Elizabeth changes the story quite a bit, I must suppose most of the audience is familiar with the story, so it doesn’t prove much a spoiler. It also makes the character warmer, particularly in contrast to Wickham (Taylor Crousore), who is very handsome but not so charming or charismatic as the character in the book. While I thought Mortellitit an effective if not canonical Darcy (and much more my type than Crousore), I think a more boyishly roguish casting of Wickham would have made this dynamic work better. I even wonder if it might have been better with the casting reversed, at least visually. As it is, I was left wondering what Elizabeth ever saw in Wickham.


I get the impression that Paul Gordon has a pretty personal connection to Darcy. This is where his voice, rather than Austen’s, breaks through. Darcy’s role is much larger in this production than it is in the book, and Gordon clearly has a strong notion of who and what Mr. Darcy should be, all of which I find believable and supported by Austen’s text. This interpretive characterization is probably the most interesting part of the play.
Mr. Bingley is very well captured by Travis Leland. He is portrayed as tongue-tied and shy, which threw me off at first, but it comes together in the end, setting up his proposal scene to be one of the best moments in the play (as it should be). I also thought that Monique Hafen Adams as quite convincing as Caroline Bingley (as is so often the case, poor Mrs. Hurst and her husband were cut from the tale). Of the Bennet sister’s, I especially liked Mary (Melissa WolfKlain), who helped maintain a comic atmosphere, which was much needed, as I thought all the humor entirely sapped from Mr. Collins (Brian Herndon) and Lady Catherine’s (Lucinda Hitchcock Cone) characters. The former came off as predatory (maybe this is another nod to the contemporary world?), and the latter rather like Cruella De Vil. Maybe it was the jazzy song she sang. She did nail the imperiousness, but the comedy was missing from the script.

I think the very last line of the play, spoken by Elizabeth, reveals a lot about the spirit of this adaptation: “It is a truth universally acknowledged, that a single man in possession of a good fortune, must be in want of a wife. Still not true!”

Overall, I really enjoyed escaping into this version of Pride and Prejudice. Streamingmusicals.com also has the company’s earlier production of Gordon’s Emma. They are staging his new Sense and Sensibility in December. I could get hooked.

Here is a clip featuring some of the songs from the show and a few more screenshots (with commentary). Enjoy!