Interview with Jennifer Becton, author of Charlotte Collins, plus a giveaway!

Not only did I recently read Jennifer Becton's Charlotte Collins: A Continuation of Jane Austen's Pride and Prejudice (which I will be reviewing this week, so stay tuned!), but I also got to know the lady a bit through an email exchange regarding the joys and sorrows of self-publishing. The happy offshoot of this was Miss Becton's agreement to not only answer my questions regarding her novel, but also to allow me to post them in the form of an interview! Furthermore, her generosity has extended to you, dear readers, to whom she offers a copy of her novel. See the bottom of the post for more details on how to enter the giveaway. In the meantime, enjoy the interview!


Welcome to First Impressions, Jennifer, and thanks for agreeing to the interview! When did you first discover Jane Austen?

My love for Austen began with BBC/A&E’s 1995 adaptation of Pride and Prejudice, which I watched in my college dorm room between bouts of study. Upon its completion, I immediately bought and read as much Austen as I could. I had finally found my literary idol: a woman whose work had endured for almost 200 years and didn’t end tragically.

Is Pride and Prejudice your favorite Austen novel? If so, why?

I do enjoy Pride and Prejudice a great deal, but I also like Persuasion. I adore the characters of Pride and Prejudice. Elizabeth was surrounded by such amusing companions, and I felt as if I knew them by the end of the novel. But I am drawn more to the redemption plot of Persuasion. I love that Austen gave Anne Elliot the opportunity to redeem herself and make the choice she hadn’t been brave enough to make earlier.

Persuasion is my favorite! Understand you have a background in editing. Did you always want to be a writer, or was this career path the result of your experiences as an editor?

From a young age, I knew I wanted to work with books in some capacity. I was that nerdy kid who actually liked learning grammar and writing essays, but writing a novel seemed like a fantasy, not a real potential for the future. After college, I chose to focus on editing, and I got a job at a local publishing company. Eventually, I began to freelance, and I occasionally wrote nonfiction articles for magazines, but writing a novel was still my dream. After one failed attempt, I decided to try again, and Charlotte Collins was born. 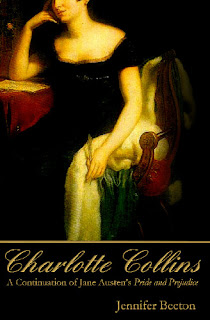 It is always gratifying to converse with another book geek. What inspired you to write a continuation of Pride and Prejudice focused on Charlotte Collins?

Traditionally, Austen sequels have focused on Darcy and Elizabeth, and while I certainly enjoy reading the retellings and what-if scenarios, I couldn’t stop wondering what happened to poor Charlotte. What had become of her? Was she happy with Mr. Collins? I couldn’t imagine that she would be, so I decided to write her continuing story so that she might have a hopeful, bright future like her friend Elizabeth.

You present an adult Maria Lucas in your book, a character who Austen barely develops. What details from Pride and Prejudice influenced your portrayal of Maria?

As you said, Austen provided very few details about Maria, so I had to begin with what she gave us: “good humoured,” “empty-headed,” “had nothing to say that could be worth hearing,” and was intimidated and easily influenced by wealthy characters. I tried to be true to this characterization but also allow her to mature somewhat. But even with the benefit of years, I didn’t imagine that she would become a great intellect or make choices based on a great deal of deep thought, so in my novel, she always took the easiest path available.

A major theme in Charlotte Collins is, as Maria puts it puts it (paraphrasing Mary Bennet), "Our reputation is truly all we have, and we must guard it jealously and give no one cause to speak ill of us." Of course, when Mary expresses this notion she is mocked, yet the sentiment is rather poignant in light of the events of Pride and Prejudice. What made you choose Charlotte Collins as an appropriate character to illustrate this point?

Charlotte was, in my view, the ideal character to exemplify this reality. In Pride and Prejudice, she did everything that was expected of her. She obeyed society’s rules, and she banked on the fact that she would have a comfortable life as a result. What would happen if her adherence to these norms did not result in the expected outcome? She had already discovered that marriage for security might not be the best choice, what would happen if she lost her reputation as well? I wondered these things, so that’s what I wrote.

Another theme you develop is the former Charlotte Lucas’ very pragmatic perspective on marriage. In Pride and Prejudice she says, “I am not romantic, you know. I never was. I ask only a comfortable home; and considering Mr. Collins' character, connections, and situation in life, I am convinced that my chance of happiness with him is as fair as most people can boast on entering the marriage state.” By the time of your story, her opinions on the matter have changed rather dramatically, yet you still portray another marriage that follows the model she formerly subscribed to. Do you believe, despite your depiction of Charlotte’s unhappiness with Mr. Collins, that her former feelings represent a realistic and pragmatic perspective, especially considering the realities of the era, or do you feel that the marriage of convenience you describe is doomed to failure?

My decision to have Maria follow in Charlotte’s footsteps and opt for a marriage of convenience was quite deliberate. Charlotte’s views on marriage were certainly representative of the prevailing views of the day, and the pressures of culture cannot always be as easily borne as Elizabeth Bennet seemed to bear them. Even if Maria desperately wanted to marry for love, women simply did not have the same freedoms as modern females or even the wealthy daughters of her day. In addition, even though I enjoy happy endings, I dislike books where every plot is neatly wrapped up with a bow on top. It would have been easy to have Maria fall in love with her husband in the last few pages, but it wouldn’t be realistic. She wasn’t at that point by the end of the novel. On Black Friday, I’ll be releasing a free short story that tells what happens to Maria next.

I can't wait to read it! Two American gentleman take center stage in Charlotte Collins as the potential love interests of both Charlotte and Maria. Several characters in the book express their beliefs in the unrefined and nonconforming nature of Americans, Charlotte included. Did you choose to emphasise this point as a foil to Charlotte’s rather starchy perspective, or was it being American yourself that compelled you to incorporate representatives of our country into your tale?

The decision to incorporate Americans into my novel was multifaceted. I did want to provide a foil for the traditional British views that Charlotte espoused, but I also felt a bit odd writing a book completely outside my nationality and culture, though my heritage is strongly British. I had not settled on making the uncle and nephew American, however, until I read some amusing primary source material about American customs during this time period. Then, I found I could not resist.

I understand you are now working on another continuation of Pride and Prejudice, this time focused on Caroline Bingley. What made you choose Elizabeth’s nemesis (if I may term her so) as the subject for a book, and is it your intention to redeem her character?

I chose Caroline Bingley for the same reason I chose Charlotte Collins as the subject of a book: I wanted to know what happened to her next. I have no intention of explaining away the nefarious deeds she undertook in Pride and Prejudice; there is no doubt that she was the villainess of the novel. Instead, I want to follow her as she undertook life without Mr. Darcy, the gentleman she clearly intended to marry. She may not make the best heroine, but she might make an interesting anti-heroine.

Do you have plans for any Austen inspired novels that are not based on Pride and Prejudice, or, if not, are there other secondary characters from this most famous of Austen’s novels that you wish to take on?

Apart from Charlotte Collins and my next novel featuring Caroline Bingley, I do not currently have plans for more Austen sequels, but I’ll still be writing. I’m working on a mystery series, the first of which I hope to release next year, and coauthoring a nonfiction book about overcoming horseback riding fear with Laura Daley. Please visit my website (www.jenniferbecton.com) and blog (jenniferbecton.blogspot.com) for more information and to learn more about Charlotte Collins: A Continuation of Jane Austen’s Pride and Prejudice.

Thank you again, Jennifer, for sharing your insights with my readers!

Thank you, Alexa, for taking the time to read and review my book. I really appreciate it, and though I don’t do reviews on my blog, I’ll be plugging your book in my next post.

I look forward to it!


Giveaway Details: Leave a comment including your email address before Monday, November 29th for your chance to win! Sorry, but the giveaway is limited to residents of the United States only (postage is expensive!). For a second chance to win, be sure leave a comment on my review of Charlotte Collins when it posts this week. Good luck!
Product Description:  "When Charlotte Lucas married Mr. Collins in Jane Austen's Pride and Prejudice, she believed herself to be fortunate indeed. Her nuptials gained her a comfortable home and financial security. If she acquired these things at the expense of true love, it did not matter one whit. To Charlotte, love in marriage was nothing more than a pleasant coincidence.

As the years of her marriage dragged by, Charlotte began to question her idea of love as she suffered continual embarrassment at her husband's simpering and fawning manners. When Mr. Collins dies, finally relieving everyone of his tedious conversation, she must work feverishly to secure her income and home. She gives no further thought to the prospect of love until her flighty sister Maria begs her to act as her chaperone in place of their ailing parents. Hoping to prevent Maria from also entering an unhappy union, Charlotte agrees, and they are quickly thrust into a world of country dances, dinner parties, and marriageable gentlemen.

But when an unprincipled gentleman compromises Charlotte's reputation, her romantic thoughts disappear at the prospect of losing her independence. As she struggles to extricate herself from her slander, her situation reveals both the nature of each gentleman and of true love."
Posted by Alexa Adams at 10:00 AM