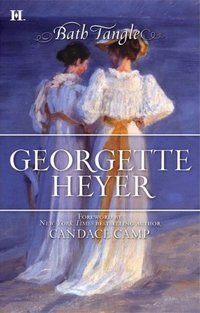 This is an out of print Heyer Regency (which will hopefully be reprinted by Sourcebooks in the not so distant future), that I decided I had to read after learning on some blog, somewhere, that an Austenesque story was partially based on Bath Tangle. I have been desperately trying to retrace my steps and figure out where I read this and what the title of the book in question is, but I have been thoroughly unsuccessful. So let me begin this review with a plea. If anyone knows what I am speaking of, I would really appreciate it if you would enlighten me. The mystery has left me feeling quite idiotic, as well as a bit insane.

This story begins with the funeral of the wealthy and eccentric Earl of Spenborough: "No one, least of all himself, could have supposed that the Earl, a fine, robust man in his fiftieth year, would owe his death to so paltry a cause as a chill, contracted when salmon-fishing on the Wye." His death displaces his hoydenish (but, of course, beautiful and charming) daughter Serena, as well as his youthful, innocent, and incorrigibly romantic bride, Fanny, from their home at Milverley Park. At first, they attempt to live in the Dower House, but as Serena finds the small rooms confining, and herself unable to help meddling in the affairs of the estate, now the property of a cousin who was not raised to his new role, they relocate to Bath to see out their year of mourning in a more congenial environment. But this is a Heyer novel, and such a straightforward plot will not suffice. The twist that makes these happenings interesting is the fact that the deceased Earl, instead of leaving his daughter's large fortune, including two estates, in the hands of an appropriate and respectable relation, has instead made the Marquis of Rotherham, Ivo Barrasford, her trustee until the time of her marriage, of which he must first approve. This is rather awkward, as Serena and Ivo were once engaged, an arrangement which she broke off, much to the shock and amusement of society.

Like almost all of Heyer's novels, the fate assigned to our hero and heroine is blatantly transparent. When two main characters show such antipathy for each other as Ivo and Serena display, it is certain that they will, eventually, fall in love. What makes the plot compelling, and the appropriately named "tangle" of the title, are the romantic fates of several secondary characters. First there is Fanny, whose gentle nature and immaturity make her a rather laughable chaperon to the willful and worldly Serena. Then we have Emily Laleham, the beautiful daughter of Lady Laleham (that "odious Laleham-woman", whose "beginnings must have been wholly vulgar", and prove to be a great comic addition to the tale), who is about to embark on her first season. Furthermore, we have one Major Hector Kirkby, a genteel young man of small fortune and estate who once offered for Serena's hand, when both were far too young to marry, and was deemed unsuitable by the Earl. He becomes reacquainted with Serena in Bath, having held her in his heart for all the intervening years, idealizing her into an angelic creature that she in no way resembles. The final component to our tangle is Gerald Monksleigh, the young, rather stupid, dandified ward of Rotherham, who has fallen hard for the lovely Miss Laleham. Each player becomes engaged to the wrong person, and our plot focuses on restoring them all to their proper mates.

While I very much enjoyed this novel, I found it to be extremely conservative when compared to most of Heyer's books, due to the fact that the end result returned each character to their proper sphere in society. Heyer is often compared to Jane Austen, and I have long argued that, while her books offer much to fascinate the Austen devotee, and that they certainly owe a debt of inspiration to to her, the two authoresses are really nothing alike. This is particularly apparent in this story, as Austen almost always has her heroes and heroines marrying across social stratification, a reflection of the weakening of class rigidity brought about by a rising bourgeoisie in the years proceeding the Industrial Revolution. In Bath Tangle, Heyer adamantly upholds the class divides: the aristocrats marry aristocrats, the gentry marry gentry, and the middle classes are confined to their appropriate sphere. The book was written in 1955, and while I am not overly familiar with modern British history, I cannot help but wonder if this is a reflection of the same kind of backlash against Communism that we saw in the United States at that time. I read this book twice, and while, on the first go round, I was highly amused by the comic elements of the story, the second time, which was my verbal recitation with my husband, I found myself frustrated by Heyer's inflexibility. Nevertheless, if you are a fan of Heyer's Regencies, the book is a must read, and I will attempt to counter my criticism by ending on this wonderful scene, perfectly emblematic of why I read Heyer, in which Serena makes a new acquaintance in the Pump Room:


Mrs. Floore poked a finger into the ribs of a mild-looking man seated in the chair beside her, and said: "I don't know where your wits have gone a-begging, Tom Ramford! Get up, and offer your place to Lady Serena, man!"


In great confusion, Mr. Ramford hastily obeyed this sharp command. His apologies and protestations were cut short, mrs. Floore saying kindly, but with decision: "There, that'll do! You take yourself off now!"


"Poor man!" said Serena, as she seated herself. "You are very severe, ma'am! Pray, how do you come to know my name?"


"Lord, my dear, everyone knows who you are! I'll wager you don't know who I am, though!"


"You would lose, ma'am. You are Mrs. Floore, a resident, I believe, of Bath," retorted Serena.


The old lady chuckled richly, all her chins quivering. "Ay, so I am, and I'll be bound you know it because you asked someone who the deuce that old fright could be, dressed in a gown with panniers!"


"I did ask who you might be, but I did not so describe you!" instantly responded Serena.


"Lord, I wouldn't blame you! I'd look a worse fright if I was to stuff myself into one of these newfangled gowns you all wear nowadays, with a waist under my armpits and a skirt as straight as a candle! All very well for you, my lady, with the lovely slim figure you have, but I'll tell you what I'd look like, and that's a sack of meal, with a string tied round it! Ay, that makes you laugh, and I see that it's quite true about your eyelids, though I thought it a piece of girl's nonsense when I was told about it: they do smile!"


"Good God, who can have told you anything so ridiculous, ma'am?" demanded Serena, colouring faintly.


"Ay, that's just it!" said Mrs. Floore. "I daresay you've been wondering what made me wishful to become acquainted with you. Well, I've got a granddaughter that thinks the world of your ladyship, and by all accounts you've been mighty kind to her."


"A granddaughter?" Serena repeated, stiffening suddenly in her chair. "You cannot mean that you are - But, no! Surely Lady Lale - the person who springs to mind - was a Miss Sebden?"


"So she was," agreed Mrs. Floore affably. "Sebden was my first, and Sukey's papa. I've had two good husbands, and buried 'em both, which is more than Sukey can boast of, for all the airs she gives herself!"


"Good gracious!" Serena exclaimed, wishing with all her heart that Rotherham could have been present, to share (as her certainly would) her own enjoyment. "Well, then, I am very happy to know you, Mrs. Floore, for I have a sincere regard for little Emily Laleham. She has often taken pity on our dullness this winter, you know. We - Lady Spendborough and I - missed her sadly when she went to London."


Mrs. Floore looked gratified, but said: "That's just your kindness, my lady, that makes you say so. I don't deny I'm uncommonly partial to Emma, bit I ain't a fool, and I can see who it was that took pity, even if Emma hadn't talked so much about you I was in a fair way to hating the sound of your name! Sukey - for Sukey she's always been to me, and always will be, let her say what she likes! - sent her to spend New Year with me, and it was Lady Serena this, and Lady Serena that till I'd very likely have had a fit of the vapours, if I'd been a fine lady, which I thank god I'm not, nor ever could be!"


"What an infliction!" Serena said, smiling. "I am astonished you could have wished to become acquainted with me, ma'am! I think, you know, that when she was only a child Emily thought me a very dashing female, because I used to hunt with my father, and do all manner of things which seemed very romantical to her! I hope she may be wiser now that she knows me better. I fear I am no model for a young female to copy."


"Well, that, begging your pardon, is where you're out, my dear!" said Mrs. Floore shrewdly. "You've done Emma a great deal of good, and I don't scruple to tell you so! She's a good little soul, and as pretty as she can stare, but she hasn't a ha'porth of common sense, and between the pair of them, Sukey, and that piece of walking gentility which calls herself a governess and looks to me more like a dried herring in petticoats, were in a fair way to ruining the poor child! But Emma, admiring your ladyship like she did, had the wit to see the difference between your manners and the ones her ma and that Miss Prawle was trying to teach her! Prawle! I'd Prawle her! 'Grandma,' Emma said to me, 'Lady Serena is always quite unaffected, and she is as civil to her servants as to Dukes and Marquises and all, and I mean to behave exactly like her, because she came over with the Conqueror, and is a great lady!' Which", concluded Mrs. Floore, "I can see for myself, though what this Conqueror has to say to anything I'm sure I don't know!"