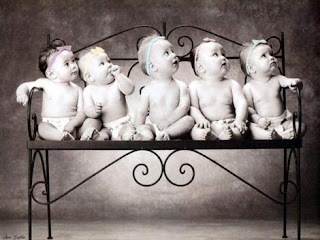 So those of you who have been reading this blog all year might remember that I had a miscarriage early last spring. It was immediately followed by another. You might also have noticed that my blogging became sporadic and irregular over the summer, as I was thrown into the worst depression (a familial trait) that I have experienced since college. The tide broke in early September, and apparently all I needed was a positive outlook to make this thing happen, because I almost immediately became pregnant again. I managed to keep my mouth shut about it this long (quite against my nature), but yesterday confirmed that my hormone levels are perfect and, most importantly, that we have a regular heartbeat. I can remain silent no longer. I want to shout from the tree tops that I am pregnant! I'm pregnant, I'm Pregnant, I'M PREGNANT!!!! Now all I can do is pray that nothing goes wrong again. It is still early days, but I feel like the more people out there rooting for me, the better off I am.

Now that things are on track and proceeding appropriately, it's only logical (or hormonal) for me to start panicking about what exactly I have gotten myself into, right? My mind keeps returning to a scene from from Illusions and Ignorance: Mary Bennet's Story by Eucharista Ward (later republished by Sourcebooks under the title A Match for Mary Bennet), in which Elizabeth gives birth to her first child. I will not transcribe the entire episode, as it frankly terrifies me, only my favorite part, which focuses on Mary's emotions as she sees her sister in such terrible pain:


Darcy reached the top of the stairway, sent Delia to summon Mrs. Bennet, and said he would go for the surgeon immediately. Meanwhile, Mary struggled to keep Elizabeth on the bed, pushing with her knees while holding her writhing sister's hands. Lizzy's fitful jerking seemed always to hurl her to the bed's edge, her hands clenching harder with each jerk. As intermittent shrieks escaped through Lizzy's clenched teeth, Mary felt her own tears rising, and she fought them off. Lizzy's face, bathed in sweat and contorted in pain, made Mary long to bathe it with a cool damp cloth, but she had neither cloth or a free hand to hold it. Mrs. Reynolds tried to still Elizabeth's legs, saying "There, there, Mrs. Darcy," and she held one foot down while raising the thin gown covering her mistress' legs. Mary, seeing blood, turned away and could not look more. She concentrated on her sister's pain-wracked face and fought down her own panic. What could she do to relieve her? All the while a terror within her warned: if this is childbirth, she should have no part of it. She would certainly tell her father she had no wish to marry, not ever. She was sure of that now.

I once felt precisely as Mary does at this moment, after my mother gave birth to my sister when she was forty and I was thirteen. However, just like Mary does in this wonderful novel, I eventually realized that it is worth it (though I find myself extremely thankful for the existence of epidurals). As I proceed through the next seven and a half months, I will endeavor to not dwell on my terror. Frankly, at least at present, my nausea, simultaneous hunger, and body aches make me want to just hurry up and get the whole thing over with, regardless of my labor fear. I am likely to write about this experience at length, and hope you will all bear with me as my brain fogs over and I babble incoherently. Your support and good wishes mean more to me than I am currently capable of articulating. And so I ask if you would please pray, meditate, or project your happy vibes my way - whatever suits your fancy. In return, you will have my eternal gratitude.
Posted by Alexa Adams at 11:30 AM