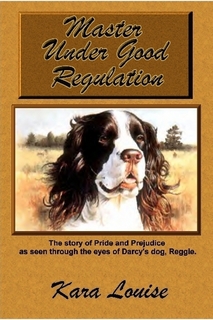 With at least two Kara Louise's books being published by Sourcebooks this year, I got an urge to go back and reread my absolute favorite of her novels, perhaps even my very favorite Austen-premised novel of all time: Master Under Good Regulation, the story of Pride and Prejudice as seen through the eyes of Darcy's dog, Reggie. Thinking my husband would enjoy the book as well (we are both dog lovers), we elected to read it aloud to each other. Even he cried, and my husband is not a weeper. It is such a marvelous story, painstakingly precise in its adherence to the original book, and I had to share my enthusiasm with you.

Any fan of Pride and Prejudice retellings from Darcy's perspective will adore this novel. It begins when Darcy is a teenager, shortly after his mother's death. Mr. Darcy Sr. takes his serious son to pick a companion amongst several litters of English Springer Spaniels: some of superior breeding, and others of slightly inferior stock. Sir Reginald Ascott Hamilton Darcy, as he came to be named, was of the latter group, but his young master sees something special in his eyes that the dogs of greater pedigree do not possess. The two become inseparable friends, and the first half of the book details Darcy's life until he goes to Netherfield - his struggles to feel comfortable in society, the loss of his father, and Wickham's attempt to elope with Georgiana - all from Reggie's perspective. Ms. Louise does an amazing job of capturing the behavior of a dog, and only a few pages into the novel, readers will already be  head over heels in love with Reggie (my husband and I had to frequently interrupt our reading to share memories of our childhood dogs - Max and Chodney). I love this scene from Reggie's puppy-hood:


I had been at Pemberley close to four months when my master came down late one night after everyone had gone to sleep. He reached into the pen, picking me up, and putting his finger to his lips to quiet me.

"Now you keep quiet, Reggie. We must not awaken anyone."

He took me up the stairs and into his sleeping chambers. He had made a ed for me on the floor next to his. He had collected a pile of old blankets and placed them in a corner. He then situated me on top of them all and told me that was where I was to sleep.

He told me to stay and then he climbed into his own bed. Once he had settled into his large bed for a considerable length of time, I decided I had stayed quite long enough, got out of my bed, and walked to the edge of his. From my perspective, being the puppy that I still was, the top of the bed appeared quite high. Nevertheless, I made an attempt to jump up, grabing the top coverlet with my paws but unfortunately, slid back down, taking the coverlet with me, to the floor.

My master awakened, unsure what had just happened.

"What...?" He laughed as I looked remorsefully at him, feeling extremely mortified at my failure to stealthily join him. I think he took pity on me, or perhaps he did not want me to make another attempt and destroy his bed, because he lifted me up on to it.

"Now, Reggie, if you are to remain up here with me, you must stay on the other side; down at the foot of the bed. Do you understand?"

I made an attempt to lick his face and he promptly put me down at the far end of the bed. But gradually, throughout the night, I worked my way closer to him and was pleased to discover that he was more than willing to give my belly a scratching. I was in raptures and quite pleased how exceedingly well my scheme had worked out!

For Darcy, forced to be perfectly behaved and responsible at such a young age, Reggie provides the unique therapy only a dog can give. So many of these scenes remind me of my father: a big, stoic kind of guy who goes all mushy when cuddling with a puppy. Darcy might have to be perfect in the eyes of the world, but Reggie lets him be himself.

By the time we finally arrive at the beginning of Pride and Prejudice, Reggie is an old dog determined to find his master a proper companion before he dies. Nowhere in Austen do we confront a more determined matchmaker than Reggie, who immediately realizes that Elizabeth Bennet is perfect for his master. Just like him, she is not of the highest pedigree, but her eyes reveal that she possess qualities the more refined ladies lack. They quickly develop a friendship, which Mr. Darcy observes jealously, and Reggie takes on the nearly impossible task of trying to make Elizabeth understand who his master's true character. Note Reggie's frustration during this familiar exchange at Netherfield:


I was startled out of my musings by Miss Elizabeth declaring, "Mr. Darcy is not to be laughed at! That is an uncommon advantage, and uncommon I hope it will continue, for it would be a great loss to me to have many such acquaintance. I dearly love a laugh."


She spoke with such a sparkle in her eyes and conviction in her words that a distressed whimper escaped me. Here I had hoped that they might find a way to converse amiably and bridge the distance between them, and instead, the chasm seemed to grow larger with every word.


I noticed the flicker of distress in my master's eyes as he considered thoughtfully his response before answering.


He owned that Miss Bingley had given him more credit than she ought and Miss Elizabeth supposed that follies and nonsense and the like were precisely what he was without. Did I dare hope that they would carry on a conversation that shed a good light on my master?


"Perhaps that is not possible for anyone." No, I thought. It seemed at the moment to be impossible. He continued, " But it has been the study of my life to avoid those weaknesses which often expose a strong understanding to ridicule."


"Such as vanity and pride." Miss Elizabeth answered back.


"Yes, vanity is a weakness indeed. But pride - where there is a real superiority of mind, pride will always be under good regulation."


Why must my master insist on being under such good regulation? Elizabeth must have likewise wondered as she turned and tilted her head down toward me, suppressing a smile from him.

In the end, it is Reggie who leads Darcy to Elizabeth during her walks at Rosings, he who orchestrates their chance meeting at Pemberley, and he who helps locate Wickham and Lydia. All those moments in the original story that seem almost too coincidental are easily explained by Reggie's amiable interference.

I cannot praise this book enough. By telling the story from Reggie's perspective, Ms. Louise shows us a side of Darcy no one else has ever captured. What we humans are willing to do in front of our pets is very different from how we allow ourselves to behave in the presence of other humans, or from what we are inclined to record in our diaries, and if there was ever a man in need of a nonjudgmental, perpetually loyal companion, it is Mr. Darcy. If you have never read Master Under Good Regulation, do yourself a favor and get a copy. It is truly a masterful piece of writing. Now I only have to convince my husband that just because we read a book about an awesome dog, it does not mean we have to immediately set forth to procure one for ourselves.
Posted by Alexa Adams at 8:10 AM