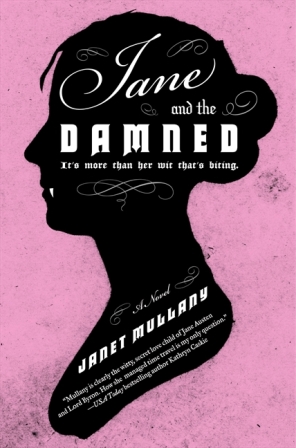 I'm always a bit skeptical of literary "mashups" but have nonetheless found my way to reading several, and even enjoying a few. However, books featuring Jane Austen as a character, especially a vampire, have held very little appeal to me. Generally, I kind of find the entire genre of 21st century vampire novels kind of offensive. Who are these kindhearted, vegetarian creatures? Certainly not the descendants of Dracula! But when I heard that Jane Austen, as represented by Janet Mullany in Jane and the Damned, was everything a fierce vampire ought and should be, I decided to open my mind and purchase a copy. I'm very happy I did. I still had some qualms with the novel (it's rare when I don't), but I read it in a single day, barely able to put the book down, completely entranced by this story of Jane fighting an invading French army in the streets of Bath.

There's my first qualm, by the way, and one I knew would be an issue for me before even turning to page one. What on Earth is Napoleon's army doing invading England, somehow penetrating one of the most effective naval blockades in military history? I am a complete and total anglophile, and the notion disgusts me. I can't imagine what actual British people think about this revisionist history (of course, there are also vampires roaming about as an accepted part of society, so I'm probably being a bit inane in my protests). While the invasion did not hinder my enjoyment of the story, the image of a guillotine in England made my skin crawl with disgust. Nevertheless, it provides an explanation for Jane's motivation in this story, and certainly made for riveting reading, all while giving her ample opportunity to indulge her animal instincts, as in this, rather messy, first kill:


"Eh, ma petite, you walk alone?" His voice rasped. "You like to welcome a Frenchman to your town, yes?"


She hid the knife in the folds of her gown and waited. She could smell his blood now that he was closer, hear the excited thrum of his heart. As though afraid she backed against the railings that led down to the front area of her aunt and uncle's house.


He laughed and lunged at her. He was against her now, almost overwhelming her with his stink and lust and the heat of his blood, grabbing at her skirts. She raised one hand and ripped at his stock and jacket, tearing the fabric-how strong she was, how powerful-and lunged for his neck beneath the greasy pomade-scented black hair.


Now she was the one who attacked. He yelled in fear and the musket clattered to the ground.


"Silence, s'il vous plait!" she hissed at him, looking into his eyes as blood pulsed from his neck-what a waste!-and to her relief his expression became dreamy and distant. He slackened in her grip as she drank, blood spilled over them both, darkening her gown and apron, his boots scrabbling on the flagstones for purchase until he collapsed beneath her.

The story begins at a Basingstoke assembly. A few of the "Damned" have amused themselves by making an appearance (in a bizarre parody of the Bingleys and Darcy's attendance at the Meryton assembly), and Jane has an unfortunate encounter with one such specimen, rendering her one of their ilk. She confesses her state to her father, who rushes his daughter to Bath, the waters in this tale having far greater curative powers than are typically attributed to them. But then the French arrive, quickly subjugating the town, and with her increased strength and prowess, Jane decides to delay her treatment until the invaders are defeated, aligning herself with a group of vampires dedicated to this cause, under the aegis of two very old and powerful leaders: a Mr. Luke Venning, who proves to be the hero of our tale, and her creator, William. The result is an exciting and thoroughly romantic tale. Highlights include Ms. Mullany's depiction of the Prince Regent, who, ironically, becomes good friends with Jane (he too, has become a vampire), and Reign of Terror styled court proceedings, which allow our dear authoress to amply display her intrepidity. I wish the battle scenes were a bit more developed, but otherwise Ms. Mullany does an excellent job of bringing this alternative reality to life.

This brings me to qualm number two, but as it cannot be discussed without spoiling the end, I suggest you either abandon this post now or continue at your own risk. Once the French are ousted (that's not the spoiler, just the inevitable), Jane must decided whether to take the cure or remain a vampire. She decides in favor of the former, largely based on the fact that her ability to write has almost completely disappeared during her stint as one of the Damned. Fans of her novels are expected, I suppose, to breath a sigh of relief that she does not abandon a legendary career, but I was actually disappointed. Again and again, throughout the course of the novel, the freedoms and empowerment that Jane gains as a vampire are emphasized. I cannot think that the Jane Austen I know through her novels would ever give up such an opportunity to escape the rigid confinements of her genteel, spinster lifestyle, especially when she is forced to relinquish true love in the process. My heart ached for both her and Luke Venning when she makes this unfathomable decision. However, I have heard a rumor that Ms. Mullany is working on a sequel, so maybe there is hope for Jane and Luke yet. I do hope so. They make a fabulous, bloodsucking couple.
Posted by Alexa Adams at 4:51 PM