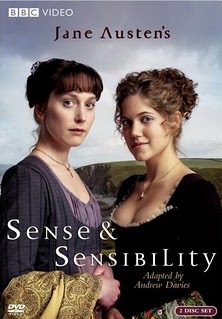 The 2008 version of Sense and Sensibility is a beautiful film, written by that giant of Austen adaptations, Andrew Davies, but while I watch and rewatch it (on this occasion, as part of my participation in the Sense and Sensibility Bicentenary Challenge, hosted by Austenprose), hoping to enjoy it more each time, there is something about this movie that just does not sit quite right with me. Unlike its predecessor, the 1995 Ang Lee film (read my review here), which blatantly had a large influence on this later production (from Mr. Dashwood's deathbed scene, to the exaggerated depiction of the Dashwood ladies poverty, and including Marianne's ill-conceived tromp through the rain), there is a darkness to this version that fails to celebrate the comic aspects of the original story. It's impossible not to compare the two movies, as they share far more than a storyline, but with three hours in which to do the tale justice, I wish the newer production had better succeeded in staying true to the original ambiance of Sense and Sensibility, rather than over dramatizing (and over romanticizing) the plot.

I could make a list of the incongruities, but that would feel peevish, so I will just name the two that irk me the most. The first, and most troublesome, is the more explicit (and sinister) sexuality displayed, both in Willoughby's relationships with Colonel Brandon's ward, Eliza, and with Marianne. The former is particularly troublesome as the Colonel seems perfectly aware of Willoughby's trespasses from the moment he arrives in Barton, but does not challenge the rogue until he abandons Marianne, in whose name he has no right to fight. My second complaint is more trifling, but it is emblematic of the entire overly sensational nature of this adaptation, and that is the setting. While I have never been to Devonshire, I can read a map, and I have a hard time understanding how the cliff-ridden, ocean views that surround Barton Cottage in this film could possibly be located "four miles northward of Exetor", which should place it decidedly inland. Yes, the ocean scape is breathtaking, but its overall effect is only to add to the too heatedly romantic atmosphere.

That being said, I cannot emphasize enough how gorgeous is the film's cinematography. Just because I don't feel it quite works, does not in any way undermine its beautiful aesthetics. Also, some of the casting is equally magnificent. I adore Dominic Cooper as Willoughby. He looks just right, and his internal struggles are more clearly portrayed than in other interpretations. Similarly, while Dan Stevens initially seems a bit too at ease for Edward (which I admit adds to his charm - I do not have a great fondness for Mr. Ferrars), his performance grows on me as he so clearly fights against his intense feelings for Elinor while despairing over his engaged state. Really all the performances are quite good, it is just that most of them pale besides those of the 1995 version, with two very notable exception, even if they are small roles. The first is Mark Williams as Sir John Middleton. I am predisposed towards Mr. Willaims, as he will always be, in my mind, Mr. Weasley, but the script for this film also develops the kindlier aspects of his personality, which are definitely present in the novel, while most films render him only a buffoon. The second and, frankly, more notable, is Daisy Haggard as the elder Miss Steele. She is the one glimmer of comic relief in the film, and the personification of Austen's original creation.

But it is wrong to not mention how wonderful Hattie Morahan is as Elinor Dashwood, even if I do prefer Emma Thompson in the role. Similarly, Charity Wakefield is a very good Marianne, it's just that Kate Winslet is far better, and the fact that the former resembles the latter makes it very difficult to disregard the comparison. Furthermore, I think I actually prefer Lucy Boynton as Margaret Dashwood to Emilie Francois, but as she is more Emma Thompson's creation than Austen's, it is hard to attribute proper credit to the interpretation. Again, as much as I try to praise, I fall into criticism. It is clear that all my biases lean towards the 1995 version, and no matter in how many ways the 2008 film will triumph, it will never measure up in my mind. I feel particularly guilty about this sad review as it is certainly a far better movie than the previous BBC renditions, made in 1971 and 1981, which, however, I find very easy to praise, as my expectations for them were never so high, and because I am always trying to convince people to give them a try (most Austen fans require no such persuasion to watch the 2008 production). This film should be celebrated and appreciated, and my prejudices are preventing me from doing it proper justice. It is simply that, in this case, Hollywood far outshown the BBC. I suppose it will happen at times, and the mid-90's were a particularly magical time for Austen adaptations - The Golden Age, if you will.

So let me end on a positive note with a quote from Marianne, spoken to her mother and Elinor on their return trip to Barton Cottage, after their stay at Cleveland. The words are all Davies', but the sentiment summarizes, very concisely, what is perhaps the most universal theme in all of Austen's novels, and therefore deserves note:

Only a true Janeite could say it so very well!
Posted by Alexa Adams at 10:56 AM