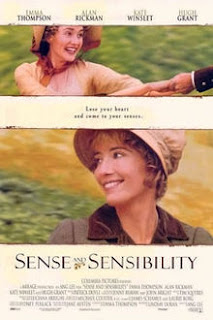 In my humble opinion, the 1995 film, written by Emma Thompson and directed by Ang Lee, is the creme de la creme of Sense and Sensibility adaptations. Not as long, and far more Hollywood, than its competition, it is, nevertheless, the version that stirs me the most. In fact, it is one of my favorite Austen adaptations, period, and when you consider that Sense and Sensibility, for all its charm, is probably my least favorite of Austen's novels (which still places it amongst my very favorite books of all time), that is definitely saying something exceptional. It is magnificently done, and if Emma Thompson was, perhaps, a bit mature to be playing Eleanor, her development of such a fabulous screenplay far overrides this complaint, especially as her performance is an absolutely triumphant.

More than any other cinematic version of this novel, this is the one that best balances the romance of the story with its social commentary, all without sacrificing the humor that Austen incorporates into all her works. The sentiment of all the other Dashwood ladies, when compared with the stolid practicality of Eleanor, is perfectly presented, providing many highly humorous moments. Kate Winslet is perfect as Marianne, and the heroes of the story are just as well captured. Alan Rickman makes the most of Colonel Brandon's tormented, romantic nature, adding to my appreciation of the character's subtleties in the manner that only a truly great actor can. He is by far the best Brandon ever. Hugh Grant, too, does an excellent job of bringing Edward Ferrars to life, beautifully capturing his awkwardness. Even Willoughby, as played by Greg Wise, is a precise version of Austen's original, never a hint of the rogue appearing in his behavior until his abrupt departure from Barton brings his actions into question (followed by one of my favorite scenes, in which Mrs. Dashwood, Marianne, and Margaret all close themselves in their bedrooms to weep inconsolably, leaving Eleanor to calmly sip her tea on the stairs).

The minor characters are very well done too, though Lady Middleton, the elder Mrs. Steele, and Mrs. Ferrars are disposed of, apparently not deemed worthy of being brought to life on the screen (I particularly regret the absence of the last). I adore what Hugh Laurie does with the character of Mr. Palmer, making him far more sympathetic than Austen portrayed him, playing up the similarities in his predicament to Mr. Bennet's, and emphasizing his political interests. I also think Richard Lumsden is fabulous as Robert Ferrars; no one else has captured his foolishness so well. John and Fanny Dashwood, too, as played by James Fleet and Harriet Walker, are perfectly impotent and vile, accordingly. I think it is the minor characters in Austen that add so much texture to her writing, particularly in providing latitude for her wit, and it gives me great joy to see them properly portrayed on screen.

Of course, there are some glaring discrepancies between this film and Austen's novel, not all of which can be chocked up to time limitations (at 136 minutes, this is the shortest of the adaptations made of this book). Margaret Dashwood (played by Emilie Francois) is an entirely new creature in this version: tomboyish, vibrant, and with a far greater role in the action than Austen allotted her. Furthermore, the financial straits the Dashwood ladies are thrown into are greatly exaggerated, Austen never indicating that they are so very impoverished as to not be able to afford meat and sugar. Lucy Steele goes to London in company with Miss Jennings, Elinor, and Marianne, giving her far more opportunity to torment Elinor than she has in the novel (indeed, I am not fond of Imogen Stubbs in the role of Miss Steele, as her machinations are made far too explicit). And Willoughby's entire confession at Cleveland is eliminated, his regret being only expressed by his forlorn look at the end of the film, as he observes Marianne's wedding from a distance. But these minor issues are easy to overlook in the face of the film's mastery of the book's themes, so truthfully represented. I have seen it countless times, and at every viewing I rejoice in its triumph. Is it sacrilegious to admit that I think I might actually enjoy this movie even more than the book, or at least that I love it equally? I feel very sheepish saying so, but it is the highest compliment I can bestow, and it is fully deserved.