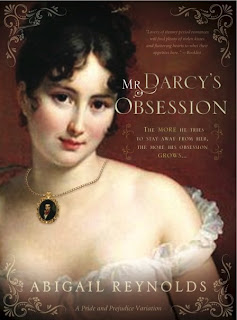 I feel terribly negligent regarding this review. I read this book at least two months ago, but with holidays, first trimester lethargy, and a multitude of other excuses, I have never gotten around to reviewing it. Long ago I learned the folly of waiting to write a review, as I inevitably I fail to do justice to the book in question. I end up getting the details confused and can't recall the moments that particularly enthralled, which regular readers of this blog will know that I love to quote. I'm particularly annoyed with myself on this occasion as Mr. Darcy's Obsession is my favorite book, of the many I have adored, that Abigail Reynolds has yet written. Granted, this has something to do with this book's comparative lack of sexual encounters between our hero and heroine (although there is a good deal of sleaziness attributed to Darcy's relatives, delving into the questionable nature of the masculine pastimes of the era), as Ms. Reynolds usually includes many heated scenes, but my enjoyment had far more to do with the joy this particular tale brought me.

Ms. Reynolds is famous for her Pemberley Variations, and I have long thought of her as the grande dame of the "What If?" genre, but I admit to being a bit concerned when I heard the theme of this novel, as it quite reminded me of another such revision by Kara Louise (the other contender for the title I just attributed to Ms. Reynolds), original published under the title Something Like Regret, but soon to be rereleased by Sourcebooks as Only Mr. Darcy Will Do. Both imagine what would happen if, after Darcy's failed proposal at Rosings, Mr. Bennet fell ill and died before Elizabeth could meet our hero again at Pemberley in the summer. I was pleased to learn that, despite the similarity of premise, both books are wildly different (and equally wonderful, I should add). In Ms. Reynolds' version, Darcy learns of the Bennet's reduced circumstances from Bingley, who has discovered, to his great chagrin and mortification,  that Jane married a Meryton shopkeeper as a means to provide for her family, and that Elizabeth is living in Gracechurch Street, acting as governess for the Gardiner's children. Unable to stay away, Darcy begins to seek Elizabeth out in her new surroundings. Several walks in a nearby park allow Elizabeth to alter her former negative opinion of the man, and Darcy finds that, in spite of her fallen status, he still cannot resist his feelings for Miss Bennet. Though more impediments than ever stand in their way, Darcy and Elizabeth become determined to grab that deep and abiding love that defines their romance.

I loved this book, especially as Elizabeth's change in social status awakens in Darcy a new philanthropy that is not usually part of his character, particularly apparent in his actions towards a new and most memorable character: an enterprising street urchin called Charlie. Bingley too is deeply altered by the Bennet's circumstances, and it is fascinating to watch Ms. Reynolds develop the effects that Mr. Bennet's death has upon our two main men. I only wish I could describe in greater detail the moments in this story that so thoroughly enthralled me. However, I have little doubt that this volume will be well loved, and I will find myself rereading it multiple times down the road. When I do revisit it, I shall have to review it again, and in a manner that does greater justice to this lovely tale.
Posted by Alexa Adams at 2:30 AM