Darcy and the Duchess by Mary Anne Mushatt 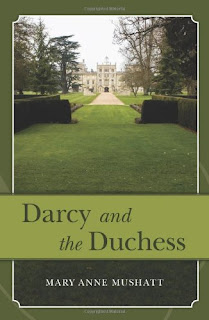 This is my other long overdue review. As I already explained the problems affiliated with delaying blogging about a book after I read it in my last post, I wont bore you all with my lame excuses again. Just be assured that had I read Darcy and the Duchess over the last week, instead of last fall, this review would make for far more worthwhile reading. As this is Mary Anne Mushatt's first book and showed great promise, I feel particularly bad about not doing it more justice.

This is a very different Pride and Prejudice variation, basically reversing the roles Darcy and Elizabeth play in the plot. Though Elizabeth is still of more humble origins, she comes into Darcy's life only after marrying his friend the Duke of Deronshire, Lord Raphael Gainsbridge. What is interesting is how the book still manages to follow the action of the original story, though the plot is entirely different. Due to those feelings of attraction he immediately has for Elizabeth - which are now even more unthinkable, as she is a married woman - Darcy attempts to convince himself of her unworthiness, but finds he cannot deny his love. There is a failed proposal, with Elizabeth still royally telling her arrogant suitor off, followed by Darcy striving to prove he is worthy. I found all of this very intriguing, staying up late to finish the book in a single session.

I think the strength of this novel rests in the inventiveness of the notion, taking our beloved story in a highly different direction than any other variation I have read, except for in one aspect: Ms. Mushatt falls into the "Wickham as kidnapper" scenario, which I have never particularly cared for, in any of its many mutations. So while I was fully engaged throughout the book, there were aspects that sat uncomfortably. For example, Ms. Mushatt seems to have a violent hatred for Miss Bingley, which, though in many ways understandable, I really don't think she deserves the fate that is dealt to her here. Still, I look forward to reading more from this original writer, and I sincerely hope that she is concocting more surprising reimaginings for our amusement.
Posted by Alexa Adams at 4:40 AM