These Old Shades by Georgette Heyer 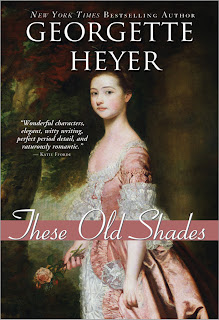 There is something undeniably fascinating about an evil hero, especially one that finds redemption in love. Of all the Heyer heroes I have encountered, the Duke of Avon, Justin Alastair, affectionately known as Satanas, must be the most mesmerizing. Those who read yesterday's review of The Black Moth (if you did not, by all means do so now) will know that his prototype, the Duke of Andover, is an unmistakable villain. In These Old Shades we encounter the same gentleman, under a new name and a few years older, bent on revenge for a wrong done to him by the Comte de Saint-Vire twenty years previously. Just to get a taste of his wrath, which is remarkably cold and calculating, I'll transcribe the following conversation between the Duke and his good friend, Hugh Davenant, in which the former has just recounted the wrongs he suffered at Saint-Vire's hand:


"I was compelled to leave France for a time. Happily another scandal arose which cast mine into the shade, so Paris was once more open to me. It is an old, old story, Hugh, but I have not forgotten."


"He has not forgotten either. He was half mad at the time, but he would not apologize when he came to his senses; I don't think I expected him to do so. We meet now as distant acquaintances; we are polite - oh, scrupulously! - but he knows that I am still waiting."

Justin walked to the table and set down his glass.


"For an opportunity to pay that debt in full," he said softly.


"Vengeance?" Hugh leaned forward. "I though you disliked melodrama, my friend?"


"I do; but I have a veritable passion for - justice."


"My dear Hugh, if you imagine that the lust for vengeance has been my dominating emotion for twenty years, permit me to correct the illusion."


"Has it not grown cold?" Hugh asked, disregarding.


"Very cold, my dear, but none the less dangerous."


"And all this time not one opportunity has presented itself?"


"You see, I wish it to be thorough," apologised the Duke.


"Are you nearer success now than you were - twenty years ago?"


"We shall see. Rest assured that when it comes it will be - so!" Very slowly he clenched his hand on his snuff-box, and opened his fingers to show the thin gold crushed.


"Naturally: Do they not call me - Satanas?" The mocking smile came; the eyes glittered.

The story begins as the Duke's long wait appears to have come to an end upon his purchasing of a nineteen year old boy named Leon off of his abusive older brother, having accidentally met the two in the street. Leon, who becomes the Duke's page, is somehow the mechanism needed to bring about Saint-Vire's fall, and as how this is to be achieved provides the great mystery of the story, I will not hesitate to disclose what the Duke immediately perceives: that Leon is not a boy, but rather Leonie, a devilishly charming and impetuous girl (I debated whether or not to disclose this fact, but as the back of the novel does so, I felt it wasn't too much of a spoiler). Leon instantly takes a worshipful stance towards the Duke, to the disgust of his other servants, who insist that it is "the duty of any self-respecting menial to loathe the Duke":


"Mon petite," he said firmly, "it is ridiculous. It is unthinkable. Meme, it is outrageous. It is against all custom. The Duke, he is not human. Some call him Satanas, and mon Dieu, they have reason!"

"I have never seen Satan," answered Leon, from a large chair where he sat with his feet tucked under him. "But I do not think Monseigneur is like him." He reflected. "But if he is like the devil no doubt I should like the devil very much."

Of course, such loyalty is not to be resisted, and once transformed back into Leonie, the young scamp proves to be the cure for the Duke's immorality (well, at least as far as affairs of the heart are concerned).

This book is undoubtedly one of Heyer's finest. The Duke and Leonie are two of her most well-developed and unforgettable creations, and the plot is far less transparent than is typical of her romances. And it isn't all just high drama, either. In true Heyer style, the book is chock full of comic relief, most of it supplied by Leonie, as in this scene with Rupert, the Duke's younger brother, who is helping Leonie to evade Saint-Vire, whom she has taken to calling a most ungenteel name:


"But we have no gun!" objected Leonie. "At any moment he may come, and these people will never be able to keep him out."


"Pistol, child, pistol!! Lord, what will you say next? Of course we have one! D'ye take me for a foo? Feel in the pockets of my coat."


Leonie jumped down from the bed, and dragged my lord's coat from the chair. She produced Mr Fletcher's unwieldy pistol from one of the pockets, and brandished it gleefully.


"Rupert, you are very clever! Now we can kill that pig-person!"

"Hi, put it down!" commanded Rupert in some alarm. "You know naugt of pistols, and we'll have an accident if you fiddle with it! The thing's loaded and cocked!"


"I do know about pistols!" said Leonie indignantly. "You point is, so! And pull this thing."

As the entire Alistair clan is thoroughly morally deficient, making Leonie rather at home amongst them, this is not the novel in which to seek elevated and honorable behavior, of the sort with which Austen is so good at supplying us. But if you will allow that villains can be charming, I will assert that the Duke of Avon is immeasurably so. As for moral fiber, as Leonie would say, "Bah!" This book does remarkably well without it.
Posted by Alexa Adams at 5:55 PM