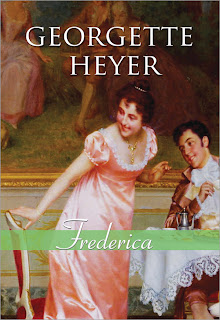 This book had to be reread as soon as my husband and I got through the first chapter of The Corinthian (read my review here) and both remarked that it was very similar to the manner in which Frederica commences. However, that is where the similarities end. Instead of being importuned by relatives to marry at the start of this book, as our hero of The Corinthian is, this novel finds the Marquis of Alverstoke set upon by female relatives determined that he shall throw a ball for their daughters as they embark on their first season (his sisters are, however, rather unhappy that a cousin, Endymion Dauntry, stands as heir to his great fortune, and would be very happy to see the young man cut out by an appropriate marriage). Not being one to put himself out for anybody, Alverstoke promptly rejects any such notion, that is until he meets the Merrivilles, a family of distant cousins, of respectable but not large fortune, who come to London. The eldest sister, Frederica, requests Alvertoke's assistance in launching her sister into society, a favor he has little interest in bestowing until seeing said sister, Charis, who is "a diamond of the first water". It then occurs to him that a ball at Alverstoke house in honor of his niece and cousin would be precisely the place for Charis to make her debut as well, and that having to support such a beautiful girl would be exactly the scenario to most infuriate his grasping female relatives. Little does he know, however, that he will soon be irrevocably embroiled in the Merrivilles affairs and called upon to bail them out of repeated scrapes, which the two youngest boys, Jessamy and Felix, prove particularly adapt at falling into.

As the name of the book is Frederica, it can be no surprise which of the Merriville ladies captures the cold Marquis' heart (despite the fact that, at 24, she considers herself quite off the shelf and practically an old maid). While Frederica proves to be precisely the intelligent and endearing lady that Alverstoke never thought existed - on who never bores him - I think the true star of the show is Felix, an imperturbably curious and infinitely charming young boy who very soon has the Marquis wrapped around his finger. He wastes no time in requesting the most outlandish favors from Alverstoke, as demonstrated in this scene in which they are first introduced:


His lordship, acknowledging thier bows, found he was being surveyed: by Jessamy, whom he judged to be about sixteen years of age, measuringly; by Felix, three or four years younger, with the unwavering yet incurious gaze of childhood. He was quite unaccustomed to being weighed up; and there was a decided twinkle in his eyes as he looked the boys over.

Jessamy, he thought, was an exaggerated copy of his sister: his hair was darker than hers, his nose more aquiline, and his mouth and chin determined to the point of obstinacy. Felix still retained the snub-nose and the chubbiness of extreme youth, but he had the same firm chin and direct gaze which characterized his seniors, and even less shyness. It was he who broke the silence, blurting out: "Sir! Do you know about the Catch-me-who can?"

"Of course he doesn't! Don't be so rag-mannered!" his brother admonished him. "I beg your pardon, sir: he has windmills in his head!"

"Not windmills: railway locomotives," replied Alverstoke. He looked down at Felix. "Isn't that it? Some sort of steam-locomotive?"

"Yes, that's it!" said Felix eagerly. "Trevithick's, sir. I don't mean the Puffing Devil: that ran on the road, but it caught fire, and was burnt."


"Ay! and a very good thing too!" interjected Jessamy. "Steam-engines on the roads! Why, they would send every horse mad with terror!"


"Oh, pooh! I daresay they would soon grow used to them. Besides, I'm not talking of that one. The one I mean runs on rails - at fifteen miles an hour, and very likely more!" He turned his attention to Alverstoke again. "I know it was brought to London, because Mr Rushbury - my godfather - told me so, and how you could ride in it for a shilling. He said it was north of the New Road, and not far, he thought, from Montague House."


"I believe it was," said Alverstoke. "From some cause or another I never visited it, but I do seem to recall that the inventor - what did you say his name is?"


"Trevithick! The first locamotive he made has five wagons, and it can carry ten tons of iron and seventy men, but only at five miles an hour. It's in Wales - I forget the name of the place - but the one here has one carriage, and -"


"Will you bite your tongue, you abominable little bagpipe?" interrupted Jessamy. "Anyone would take you for a regular shabster, rattling on like that, and not allowing Lord Alverstoke to edge in a word!"


Abashed by this rebuke, Felix hastily begged his lordship's pardon; but Alverstoke, amused by him, said: "Nonsense! I can always edge in a word - when I wish to! There was such a locomotive, Felix, but I am afraid it's a thing of the past. I rather think that Trevithick hired some ground, near Fitzroy Square, fenced it in, and laid down a circular track. As I recall, it created quite a stir, but although a great many people went to see it, few could be persuaded to ride in it - and none at all after a rail broke, and the engine overturned! So it had to be abandoned. It must have been quite ten years ago." He smiled, seeing the look of disappointment on Felix's countenance. "I'm aorry! Are you interested in locomotives?"


"Yes - no - in engines!" stammered Felix. "Steampower - c-compressed air - ! Sir, have you seen the pneumatic lift at the foundry in Soho?"


"They wouldn't let me," replied Felix sadly. A thought occured to him; and, fixing his ardent eyes on Alverstoke's face, he asked, with pent breath: "If you wished to see it - could you?"


Frederica, who had resumed her seat, said: "No, no, Felix! Lord Alverstoke does not wish to! You mustn't plague him to take you there!"


She was right: Alverstoke had not the remotest desire to inspect a pneumatic lift, but he found himself unable to resist the pleading look in the eyes raised so hopefully to his. He sat down again, smiling a little ruefully, and replied: "I expect I could. But you must tell me more about it!"

Needless to say, when Alverstoke's associates spot him strolling down the street with a boy bound for a foundry, they are literally floored. This is man who doesn't know the names of his own nieces and nephews, but for the Merrivilles he finds himself bending over backwards.

This is such a charming story. It is a classic Heyer Regency, filled with romping antics and enchanting characters. Frederica is a must read for the Heyer fan. If the indifferent Lord Alverstoke can't resist Felix's pleading eyes, how can you?
Posted by Alexa Adams at 9:47 PM