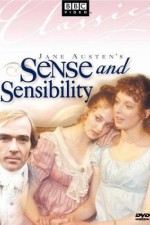 When I received the BBC Jane Austen Collection box set for Christmas, 2009, I announced that I would review all the films during the course of 2010. Attentive readers will know that I failed to fulfill this goal. I watched all the films, repeatedly, but did not always take the time to record my thoughts. So for my first post for the Sense and Sensibility Bicentary Challenge, it seemed reasonable to rewatch (yet again) this film I have delayed blogging about for so long.

The 1981 BBC adaptation of Sense and Sensibility is presented in seven, half hour segments. While like its predecessor, the 1971 version (read my review here), Margaret Dashwood is not included in the script, for the most part it sticks fairly strictly to the novel. It opens once John and Fanny Dashwood have already taken possession of Norland, showing Elinor, Marianne, and their mother in a carriage, returning from viewing a potential new home. Though this scene is not Austen's, I think it very appropriately sets the themes of the film, expeditiously summarizing the novel's introductory chapters, and so will transcribe for you the dialogue:


Elinor: Mama, tis no use considering that house any further. Tis much too large for us.


Mrs. Dashwood: There are no others to let in the neighborhood. We have seen them all.


Marianne: I still cannot believe it. Father is hardly buried, and Norland is not our home anymore. How could he do this to us?


Elinor: He had no say in the matter. The estate was entailed to John in Grandfather's will. Father only had it for his own lifetime.


Marianne: I am sure it was all Fanny's doing.


Mrs. Dashwood: Upon my life I do not know a more unpleasant woman.


Elinor: Norland is John's home now, but I am sure we may rely on him to show a proper feeling for us.


Mrs. Dashwood: I shall write to my relations. Perhaps they can help us.


Elinor: Why not? We have got to find somewhere to live


Marianne: Oh Elinor! Where are your feelings?


Elinor: I govern them.

This scene flows immediately into John and Fanny's classic debate about how much help John should provide his "half-sisters", which, of course, cannot be condensed, abbreviated, or summarized, as it is far too wonderful. Edward Ferrars (played by Bosco Hogan) arrives at its conclusion, thus rapidly setting our story in motion.

Elinor is played by Irene Richards, better know to Janeites as another thoroughly practical lady, Charlotte Collins, whom she portrays in the 1995 version of Pride and Prejudice. Tracey Childs portrays a thoroughly adolescent Marianne (as the dialogue above indicates), enraptured with her own mind and ideas, and displaying little sympathy for the rest of humanity. I think both actresses do a fine job, particularly Ms. Richards, who captures Elinor's pragmatism while still displaying appropriate passion when called upon to do so. In another scene crafted by the screenwriters (literary adaptation veterans Alexander Baron and Denis Constanduros, the latter of whom also wrote screenplays for the 1971 version of Sense and Sensibility and the 1972 adaptation of Emma), rather than Austen, Elinor shows her mettle to a particularly money conscious John Dashwood (played by Peter Gale), after he informs both she and Marianne of the outcome of Mrs. Ferrars learning of Edward's engagement to Lucy Steele:

Marianne: Why was your message to us so urgent?

John: Ladies, you are Dashwoods - you are family! You must know what has been decided concerning Edward.


Elinor: What has been decided concerning Edward?


John: We sent for him immediately. All that Mrs. Ferrars could say to make him put an end to this engagement - all my arguments, all Fanny's entreaties - were of no avail. We reminded him that Miss Morton is ready and willing! 30,000 pounds! I never thought him so stubborn and unfeeling. What Mrs. Ferrars suffered is mot to be descirbed. He was engaged, he said, he would stand by it, and we could not make him budge!


Elinor: We have no influence if that is in your mind.


John: Hmm. The upshot is that she has cut off Edward completely, without a penny!


Marianne: Gracious heavens! Can this be possible!


John: You may well wonder, Marianne, at the man who still refused to give up his engagement after such a threat. And whta is more, Mrs. Ferrars is to settle her entire estate upon Robert. Her lawyer is with her now.


Elinor: And what has this to do with us?


John: Why Elinor, you are Dashwoods! It is Mrs. Ferrars wish, nay, her command, that henceforth Edward shall be as a stranger to us all. We finish with him; we could him dead! Mrs. Ferrars will not help him whatever his plight and nor must we...


Elinor: John! Edward has been my friend, my mother's friend, and my sister's friend. I pity his situation, but I glory in his integrity.

Elionor: And our friend he will remain.

John: Elinor! It is Mrs. Ferrars! It is Fanny! What is a man to do?

Elinor: In two days, thank goodness, Marianne and I end our stay in London. We thank you for your past hospitality, but our departure will no doubt save you any further embarrassment.

I really enjoy this scene, as John's discomfiture is so blatant. It is actually the minor characters in this film that I most prefer, especially the performances of three ladies: Julia Chambers as Lucy Steele, Annie Leon as Mrs. Jennings, and, particularly, Amanda Boxer as Fanny Dashwood. Ms. Chambers captures just the right note of false naivety and malicious manipulation that Lucy requires, Ms. Leon is just as loving and oblivious as Mrs. Jennings should be, and Ms. Boxer is odiously hateful as a thoroughly smug Fanny, until her hysterics upon learning of Edwards engagement (the comic highlight of the film) destroy her calm exterior. I find much in this adaptation to enjoy, but that does not mean that those who have no tolerance for this era of BBC productions will feel similarly. The sound and cinematography suffer from all the limitations of its era, and it furthermore seems rather lower budget than the 1971 version, as the costumes and sets are notably plainer. Also, while most performances are well done, I really have no patience for Robert Swann's emotionless portrayal of Colonel Brandon. Still, I will continue to relish each rewatching of this film, as it is so true to both the sense and sensibilities of Austen's novel. Let me leave you with a link this early scene between the Fanny and the elder Mrs. Dashwood (the embedding feature is, unfortunately, disabled), as Ms. Boxer's sneer is so priceless. I do think she plays the role better than anyone else who has attempted it.