The Black Moth by Georgette Heyer 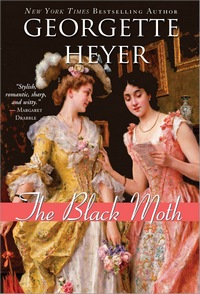 So it was a Heyer kind of holiday. Having disposed of all familial duties before Christmas, my husband and I settled down to two previously unread Heyer novels: Beauvallet (read my review here) and The Black Moth. The thing is, once we had a taste, we just couldn't stop, resulting in the rereading of several favorite Heyer books over the New Year weekend. As I have never provided proper reviews of any of the reread books, I will spend this week posting them, so keep checking in Heyer fans. This week is for you.

A large part of the reason we embarked on this rereading splurge is the fact that The Black Moth, which was Heyer's first novel, introduces several characters that later reappear in her work, though under different names. The villain of this tale - the Duke of Andover - is unmistakably the prototype for the Duke of Avon, who is the hero of the These Old Shades (my husband's favorite Heyer novel). The resemblance goes far further than their respective nicknames - Satan and Satanas - encompassing the siblings of this enigmatic figure, while the plot of The Black Moth provides essential back story for These Old Shades. I had long been wary of purchasing The Black Moth because I had read reviews suggesting that the writing was inferior to Heyer's later works, but I did not find this to be the case. Any fan of Heyer will delight in seeing her unmistakable style assert itself at such an early age (she was only seventeen when she wrote it, as a means of entertaining her sick brother), and any fan of the Duke of Avon will relish this window into his notorious past.

The hero of the book is Jack Carstares, who was forced to flee England in disgrace after taking responsibility for his younger brother having cheated at cards. Returning to his home land after several years, he makes his living as a highwayman and uses an assumed name. His younger brother, Richard, has lived with the guilt of his cowardice, but the torment comes to ahead after meeting his brother once again, upon being held up by him on the side of the road. Their father having died, Jack is now the Earl of Wyndham, but he will not step into his inheritance as, in order to do so, he would have to denounce his brother as the true cheat. Richard wants to clean the slate but his beautiful and tempestuous wife, Lavinia, sister to the Duke of Andover, fears the resulting disgrace.

Jack and the Duke (whose given name is Tracy Belmanoir) meet when Jack accidentally intercepts Tracy in the midst of trying to kidnap Diana Beauleigh, the genteel lady who plays the role of heroine in this raucous tale. Jack and Diana fall in love but, due to Jack's sordid past, they cannot marry. Meanwhile, the Duke, quite resentful of and unaccustomed to his plots being foiled, remains determined to make Diana his own, even if it means taking the previously unthinkable step of marrying her. Morality takes a firm back seat to passion and adventure in this story, as is often the case in Heyer, but it doesn't hinder the reader from relishing every moment and becoming fascinated with even the most viscous participants in the action. Ferocious the Duke may be, but vile he is never.

I regret having waited so long to purchase this book, as it is absolutely essential reading for any Heyer fan. When I first began to read her books, I stuck with her Regency romances, an obstinacy I have since learned to regard as unfounded prejudice. Some of her greatest stories take place in the eighteenth century, providing insight into the manners and customs that developed into those of the Regency. The Black Moth is no exception. Furthermore, as I have discovered that it is available online for free (if you can bear the ads, read it here), there is little excuse not to take my advice read it promptly. What better way to begin the new year?
Posted by Alexa Adams at 2:44 PM