A Noteworthy Courtship by Laura Sanchez 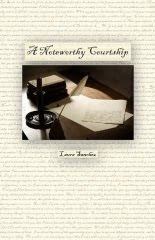 I have never seen the movie You've Got Mail, nor do I want to, so when A Noteworthy Courtship arrived in the mail and I read on the back that it is based on both Pride and Prejudice and You've Got Mail, I was a bit leery. I wondered what on Earth has Austen to do with the shenanigans of a Tom Hanks and Meg Ryan romantic comedy and if I would need to see the film in order to appreciate the book. It turned out not to be the case, though a reader who is familiar with the film might catch something in reference to it that I missed. You've Got Mail seems to have only contributed a plot device to this novel; Jane Austen and Laura Sanchez did the rest.

Those who have not seen this early internet era tale of romance, like me, probably still know what it is about: two singles meet online and create a romance out of email, or something like that. In A Noteworthy Courtship, Ms. Sanchez has stripped the technology out of this scenario and contrived an anonymous and clandestine correspondence between Darcy and Elizabeth by means of notes left in a particular book in the Meryton bookseller's store. The story picks up after the day after the Netherfield Ball, the residents of that house having chosen not to flea the neighborhood. The result is a smooth courtship for Bingley and Jane while Darcy and Elizabeth's remains as messy and full of misunderstandings and apprehensions as ever. It is apparent that Ms. Sanchez took great care in the writing of this book, which amply demonstrates her respect for Austen. The details fit with those of Pride and Prejudice and the plot is untainted by those scenes of sexual intimacy that I find so distressing. I particularly enjoyed references to Austen's other novels, some subtle and others were more obvious. For an example that manages both, I turn to two of the notes that Darcy and Elizabeth pass back and forth. The first is from :

Your comment on "romantic notions" puts me in mind to a current novel, which you most likely have never have read as it is written by "a lady", wherein a Mr. Ferrars does not find happiness until he walks away from his fortune and chooses to live modestly, married to the woman he loves. If you doubt that a character who acts in such a way could exist as a hero in a published and well circulated work, the novel is entitled Sense and Sensibility.

Mock me if you dare, but I have read Sense and Sensibility, and while I enjoyed the lady's style, I believe her story supports my point. Your Mr. Ferrars, champion of contentedness found in nothing more than his true love at his side, is also a man who does the honorable in the name Miss Steele only to be made a pauper, and find his brother in receipt of his fortune. The next we hear of him, his brother has gained the hand of Miss Steele, but Edward is glad to be free of the fiance for whom he abandoned his fortune and declares his love for Miss Dashwood. Does this not show the error of following the fickle whims of the heart?

I love the notion of Austen's characters debating her work. While the topic is indisputably Sense and Sensibility, one hears echoes of Northanger Abbey as well.

I enjoyed this book and, when I came to the end, found myself wanting more. Unfortunately, the blooper reel that makes up the end of the novel cured me of this desire. Ms. Sanchez fills the last several pages with revised and edited out scenes. There was a reason she didn't use them and their inclusion in the book feels like a ploy to increase the word count.

A Noteworthy Courtship has all the elements I look for in JAFF: familiarity twisted with alternative perspective, allowing me to consider Austen's work in new and refreshing ways while maintaining the comforting feeling I derive from her novels. While I can't call this book excessively diverting, I can assure Janeites of it's perfect pleasantness.

Labels: Pride and Prejudice, Reviews, Sense and Sensibility, What If?