The Pemberley Chronicles: Recollections of Rosings by Rebecca Ann Collins 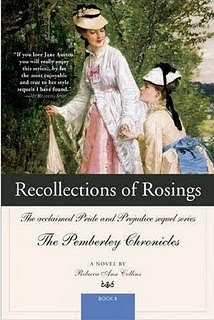 Warning: Slight spoiler alert. Please proceed with caution, though I do not believe that reading my review will diminish your enjoyment of the book. For some reason I don't seem to be able to review The Pemberley Chronicles without giving something away.

Read my review of volume seven, Postscript from Pemberley, here.

Read my summary of the first six books in The Pemberley Chronicles here.

His eyes were fixed on Marianne, and, after a silence of some minutes, he said, with a faint smile, "Your sister, I understand, does not approve of second attachments."

"No," replied Elinor, "her opinions are all romantic."

"Or rather, as I believe, she considers them impossible to exist."

"I believe she does. But how she contrives it without reflecting on the character of her own father, who had himself two wives, I know not."

I commence this review of the eighth volume in The Pemberley Chronicles with the above quote from Sense & Sensibility because I have come to the conclusion that second attachments are the pervasive theme of the series. Yes, several of the characters enjoy very happy first attachments, but as each book proceeds, Rebecca Ann Collins focuses increasingly on the more mature and fuller love to be found later in life, after early romantic expectations have been disappointed. Such is certainly the case in Recollections of Rosings, where the focus falls upon the eldest daughter of Mr. Collins and Charlotte Lucas, Catherine Harrison.

While the back cover of this book would lead you to believe that this story is primarily about Catherine's youngest daughter, Lillian, and conflict over her romance, it is her mother's relationships that dominate. Following in her mother's footsteps, Catherine (the favorite and namesake of Lady Catherine de Bourgh) married the rector of Hunsford at the age of twenty-nine. As the book begins, disaster has struck at Rosings in the form of a devastating fire. In his anxiety to help in the emergency, Dr. Harrison overexerts himself and has a heart attack, precipitating a rapid decline. The family is relocated to the Dower House on the estate, where the doctor breaths his last, leaving Catherine and Lillian, the only child still at home, alone.

Into this scene comes Frank Burnett, an expert brought in to assist the in the preservation and restoration of the scorched main house. Soon it is revealed that this same man, in Catherine's youth, held the position of librarian at Rosings and that the two had developed a close friendship. Due to the will of a rather officious and overbearing lady (need I mention names?), that friendship came to an abrupt halt. Now, with no one to stand in their way, Catherine and Frank have the freedom to get to know each other again.

The most striking thing about this novel are the images of Rosings, that imposing edifice that so impressed Mr. Collins with its expensive fireplaces, after the fire:

It was nearly four days since the fire, yet parts of the building were still smoldering - the smoke, acrid and dark, drifting upwards - while everywhere across the once immaculate park was strewn the debris of days past, Scorched walls, crumbling masonry, and shattered windows - all those many dozens of windows that her father used to speak of in a hushed voice, whose glazing had cost Sir Lewis de Bourgh a fortune - shattered now, hung with raged bits of rich curtains blowing in the wind.

Catherine gasped. She could hardly breathe, and beside her Lillian was weeping as Jonathan and Mr Grantham helped them alight. The driver of the vehicle they had hired stood beside them open-mouthed, so shocked he seemed to have been paralysed, unable to even recall the agreed hire when Mr Grantham attempted to pay him. "Jesus!" he said. "Jesus, I never seen such a sight before!" and it seemed he spoke for them all.

Rosings, in this novel, stands as a monument to Lady Catherine's legacy. It's near total destruction represents the end of her notable influence, freeing those who were subjected to her rule from the burden of her legacy. Strangely, I feel almost sorry for the great lady as her morals, priorities, and values are swept away in a tide of change. But if nothing else, the Victorian Era was about progress, and the younger representatives of the Darcy, Fitzwilliam, and Collins families are clearly members of this evolving world, while Lady Catherine is distinctly a relic of the past.

This book almost entirely focuses on this next generation while their elders - Darcy, Lizzy, Jane, and Charlotte - are very much relegated to the background. I prefer it when Ms. Collins includes these original characters more. There is even a marriage from Longbourn without any mention that the ceremony is taking place in the same church that saw the Darcys and Bingleys married, the unions that are the premise for the entire saga. Several other things bother me about this volume. While Ms. Collins is usually a very careful writer, she obvious overlooks a typo that skews the chronology of events, includes an episode of high drama that does nothing to advance the plot, only making the book unnecessarily longer, and never even has it occur to Catherine, while mourning lost years of potential happiness, that had things proceeded differently she would not have her beloved children until the very end, when the obvious is thrust in her face. For the woman who is supposed to be the heir to all of her mother's kindness and pragmatism, I find this frustratingly oblivious.

So this isn't my favorite episode in this sprawling Victorian epic, but neither is it the one I liked least. Like all Ms. Collins' books, it's somewhat repetitive and dry, but if you don't read this book, how can you proceed to the next? A Woman of Influence will be released in June and promises to be about the life and times of Rebecca Tate, Catherine's younger sister. I fear this book is going to be a lot like My Cousin Caroline, more of a recap than new material, but I will, of course, read it anyway.