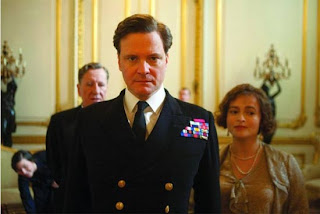 I finally, after repeated failed attempts, saw this film yesterday. First there was the countdown for the movie to be released, followed by my disappointment that it was only available in New York and LA. Then when it was finally available in a theater near me, each time I tried to see it it had already sold out. Now I know that in the little corner of the internet I inhabit, period films are big news, but let's face it: a movie such as The King's Speech being sold out, during a season when action and special effects packed blockbusters abound, is no small occurrence. And I do not think the movie's popularity can be attributed to the supreme sensibilities and elevated taste of the Wilmington area. It is an anomaly, and while I am, on the one hand, ecstatic to see a film of its ilk receiving such attention, I kind of also resented having to cope with large crowds and less than stellar seats to see it.

But let's discuss the film itself (I do not fear spoilers, as the plot is perfectly well-known). It is a charming story about the extreme difficulties of being a royal. Perhaps my favorite line (indeed, the entire scene was remarkable) was spoken during an argument between Edward VIII, who, having recently succeeded to throne, was not taking his duties very seriously, and the future the George VI (Bertie to his family and speech therapist, making it the most accessible name for me to employ here) who attempts to admonish him over his choice of life partner (the once divorced and still married Mrs. Simpson). I am not going to quote this perfectly accurately, I am sure, but it was something like this:

Edward: I am the King. Does that not come with any rights?


Bertie: It carries a great deal of privilege.

The scene ends with Edward accusing Bertie of attempting to steal his thrown and mocking his stammer, which leaves his younger brother, who had been making a quite forceful arguement, entirely unable to enunciate a single word in his own defense.

The story is rather fascinating, and I returned home anxious to find more information on the nature of the abuse this generation of royals suffered through as children. I did not learn much, except that all the children suffered at the hands of their nanny, Mary Peters. The film makes it appear that Bertie was her main victim. I suppose this isn't the kind of information the royal family is overly anxious to impart to the public. The main accusation leveled against her in the film by Bertie is that she didn't feed him, but even that detail the online sources failed to corroborate. However, though it is a moving story (and not all serious - there is a great deal of comic relief incorporated into the tale), the real strength of the film lies in the stunningly masterful performances of Colin Firth as George VI and Geoffrey Rush as Lionel Logue, the unconventional speech therapist. Both were phenomenal. At one point Bertie comments to Lionel that he often thinks about who the common man is when he sees them waving from his car window, but that he doesn't actually know. The great secondary plot of this tale is the friendship created across class lines, and the universal humanity of all people that it highlights, be they elevated or obscure.

When we think of physically challenging performances, we usually picture actors and actresses violently altering their bodies in preparation for a role, but I think Firth must have suffered agonizingly for this film. The tension so perceptible in his throat as he struggles to omit words was stunning to watch. The two actors interact together beautifully, capturing the kind of charisma usually reserved for romantic counterparts. That is not to say the the relationship between Firth and Helena Bonham-Carter, as Elizabeth, (whose hats made me drool) was not sparkling in itself. They painted a touching picture of a couple deeply in love, prepared to stand by each other through the seemingly most insurmountable challenges imaginable.

Though the story was highly engaging, its the performances that make this movie the masterpiece that it is. Those of us who have for so long lauded Firth's remarkable abilities can take great satisfaction that this is the film that is likely to finally bring him the Academy Award he has so long deserved. As my husband and I left the theater, there were two women discussing him in front of us in the parking lot. They were attempting to recall what else he has been in, mentioning one or two of his most recent films, and I couldn't help myself but to call out, "He was in Pride and Prejudice!" One of them looked at me in confusion for a moment, and then a look of recognition seemed to dawn upon her face, and she said, "That's right. So he was." No matter how wonderful this role is, he will always be, first and foremost, Mr. Darcy to me.

One last, thought - Firth is not the only Austen performer to grace the screen in this film. Jennifer Ehle, Elizabeth Bennet herself, played Mrs. Myrtle Logue (the other unconditionally supportive wife of the piece), and Michael Gambon (may I say Dumbledore himself?), who was Mr. Woodhouse in the most recent production of Emma, is George V.

Note: I should have also included David Bamber (thanks Vic!), in the small role as theater director, who is another 1995 Pride and Prejudice veteran, having nailed the role of Mr. Collins.What a reunion!