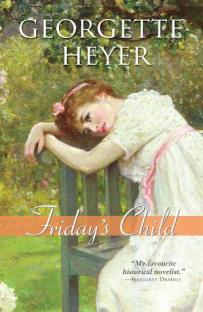 I recently reread Friday's Child for the third time, and I still enjoy it just as much as I did the first time around. It is definitely one of my favorite Heyer novels, a remarkable fact when I consider that the main characters are some of the most vapid, shallow, and ridiculous I have ever encountered. Somehow, and I have not yet quite put my finger on why, I adore them anyway. Perhaps it is just that Hero Wantage and Lord Anthony Sheringham (Sherry to his friends) are so childish that they trigger a sense of affection in me? I'm not sure. What I can say for certain is that I feel an almost parental indulgence for their antics. No matter what scrapes they find themselves in, even when they pose danger to the feelings, and sometimes well-being, of others, my perfect humor and sympathy with them never waivers.

Our story begins with a failed proposal. Sherry fancies himself in love with his neighbor and current toast of the town, Isabella Milborne, and offers for her hand, more with the intention of freeing up his inheritance, held in trust until he marries or turns twenty-five, than settling down. Though he has convinced himself of his passion, debt is his true motivation, the inevitable result of a rakish lifestyle, and when Isabella rejects him, he vows to marry the next woman he sees. This just happens to be Hero, his childhood companion and longtime worshiper, who is in rather a predicament herself. The cousins who have long housed her have presented her with an ultimatum: accept the curate's offer of marriage or be sent to Bath to train as a governess. Sherry proposes the solution to both their troubles, and in a bizarre take on the marriage of convenience the two run off to London together, Hero hiding on the floor of Sherry's curricle to escape local notice.

Thus does Hero, the dependent cousin, become a viscountess. She and Sherry are married by private license the day after they arrive in London, and this is when the real fun begins. Initiated into Sherry's band of boon companions - his cousin, the scatterbrained Honorable Ferdinand Fakenham, the romantic and volatile Lord Wrotham, and the brains of the group (no difficult or notable feat), Mr. Gilbert Ringwood - Hero is introduced into a world to which few ladies of quality are ever exposed. She and Sherry rack up endless amounts of staggering expenses (Sherry buys no less than nine horses in a single afternoon) and engage in the kind of adventures that would cause proper ladies to faint. However, the inappropriateness of the situation he himself has created eventually works upon Sherry's notion of respectability (this is, after all, his very own wife who is spouting phrases like "bits of muslins" and frequenting gaming hells), driving the couple towards a more unexceptional mode of life. Fortunately for the reader, before we find ourselves at this happy conclusion, the laughs derived from this most unusual couple's lack of propriety are nonstop.

This book is one of both my and my husband's favorite novels to read aloud because the dialogue is so ridiculously amusing. I have no wish to deprive any potential reader of the outrageous joys the story contains and so must be very selective about what passages I choose to quote, but I think you get a sense of the atmosphere Heyer creates in this phenomenal book in the following scene during which, on the evening of their wedding, the newlywed couple dine with some of Sherry's friends:

The Honorable Ferdy, who had been pondering at intervals all day how his cousin's wife came by such a peculiar name, now introduced a new note into the conversation by saying suddenly: "Can't make it out at all! You're sure you've got that right, Sherry?"


"Hero," said Ferdy, frowning. "Look at it which way you like, it don't make sense. For one thing, a hero ain't a female, and for another it ain't a name. At least," he said cautiously, "it ain't one I've ever heard of. Ten to one you've made one of your muffs, Sherry!"


"Oh no, I am truly called Hero!" the lady assured him. "It's out of Shakespeare."


"Oh, out of Shakespeare, is it?" said Ferdy. "That accounts for my not having heard it before!"


"You're out of Shakespeare too," said Hero, helping herself liberally from a dish of green peas.


"I am?" Ferdy exclaimed, much struck.


"Well, if that don't beat all!" Ferdy said, looking around at his friends. "She says I'm out of Shakespeare! Must tell my father that. Shouldn't think he knows."


"Yes, and now I come to think of it, Sherry's out of Shakespeare too," said Hero, smiling warmly upon her spouse.


"No, I'm not," replied the Viscount, refusing to be dragged into these deep waters. "Named after my grandfather!"


"Well, perhaps he was out of Shakespeare, and that would account for it."


"He might have been," said Ferdy fair-mindedly, "but I shouldn't think he was. Mind you, I never knew the old gentleman myself, but from what I've heard about him I don't think he ever had anything to do with Shakespeare."


"Very bad ton, my grandfather," remarked the Viscount dispassionately. "Regular loose-screw. None of the Verelsts ever had anything to do with Shakespeare."


"Well, I dare say you must know best, Sherry, but only think of Anthony and Cleopatra!" argued Hero.


"Anthony and who?" asked Ferdy anxiously.


"Cleopatra. You must know Cleopatra! She was a Queen of Egypt. At least, I think it was Egypt."


"Never been to Egypt," said Ferdy. "Accounts for it. But I know a fellow who was in Egypt once. Said it was a sad, rubbishing sort of place. Wouldn't suit me at all."


"Good God, you know what she means!" interpolated the Viscount.


Mr. Ringwood nodded. "She's a mummy," he said. "They have 'em in Egypt." He felt that this piece of erudition called for some explanation, and added: "Read about 'em somewhere."


"Yes, but the one I mean is in Shakespeare," said Hero. "I expect it's the same one, because he was forever writing plays about real people."


A horrible suspicion crossed Ferdy's mind. He stared fixedly at her, and said: "You ain't a blue-stocking, are you?"


"Of course she's not a blue-stocking!" cried the Viscount, bristling in defence of his bride. "The thing is she's only just out of the schoolroom. She can't help but have her head crammed with all that stuff!"


"Anyone can see she's not a blue-stocking," said Mr. Ringwood severely. "Besides, you oughtn't say things like that, Ferdy. Very bad ton!"


Mr. Fakenham begged pardon in some confusion, and said he was devilish glad. A fresh bogey at once raised its head, and he demanded, in accents of extreme foreboding, whether the evening's entertainment was to consist of Shakespeare. Upon being reassured, he was able to relax again and to continue eating his dinner in tolerable composure.

Such is the style of anti-intellectualism that pervades this story, a thing I would typically deplore, yet incongruously I love every moment of it. For all those who compare Heyer to Austen, I offer this novel up as a demonstration of the absurdity of the notion. Austen could never (would never) create these characters, who are more caricature than anything remotely based in reality. I continue to be amazed at Heyer's ability to entrance me with those who I must deplore, in a manner most antithetical to Austen, and perhaps none more so than Hero and Sherry. I cannot recommend this book enough and plan to have my husband read it to me, once again, while I am in labor, for nothing else could provide such a perfect distraction. I only fear that my laughter will prove an impediment to my ability to follow the doctors instructions, but that, I fear, simply cannot be helped.
Posted by Alexa Adams at 9:10 AM