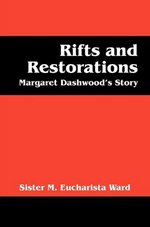 I came across Rifts and Restorations: Margaret Dashwood's Story by Sister M. Eucharista Ward accidentally on Amazon when searching for a different novel, and immediately purchased it to read for the Sense and Sensibility Bicentenary Challenge hosted by Austenprose. I really loved A Match for Mary Bennet and was ecstatic to find another Austen continuation by this author. Unfortunately, while entertaining, this book did not live up to its predecessor. It begins several years after the conclusion of Sense and Sensibility, when Margaret Dashwood is still unmarried at age twenty-seven. Much of it is told in flashbacks, retelling the events of Margaret's romantic life, interspersed with the details of her sisters' lives, particularly Elinor's. So much happens in less than 300 pages that it is almost impossibly to summarize succinctly, but here are the major points: Lucy Ferrars is a Machiavellian nuisance, Mrs. Ferrars a fickle tyrant, and Margaret must learn to cope with her disgust for both with grace, a lesson that corresponds to her finding true love.

While the multitude of events that make up this story contribute to the difficulty in reviewing it, the biggest impediment is the lack of coherence in the character development. While this is a problem across the board, I think I can best illustrate it by examining the very first line, "A young lady of meager dowry deemed in her youth to be 'not promising,' shows great indiscretion in refusing a suitor of substantial means." Nothing at all about the depiction of Margaret Dashwood conforms to this notion of her being "not promising". From a young age she stops eligible gentlemen in their tracks with her beauty, and while she does reject at least one proposal from a man of "substantial means", the gentleman who is referred to in this opening sentence may have means, but they are in no way substantial. In fact, his status as an agent of Willoughby's, caring for the house at Allenham (which the charming rogue did indeed, after all, inherit) in the owner's absence, is one of dependence, though it is depicted in a highly glorified manner. His eventual marriage to the daughter of a shopkeeper is far more appropriate than a union with a gentleman's daughter. Stranger still is the fact that the lady he does marry is somehow accepted without question by society, though she too is without the benefit of a dowry. The entire book is filled with these confusing discrepancies, requiring the reader to suspend thoughtful analysis in order not to become frustrated.

My other issue with the book is the religious content. I suppose I should not be surprised by it, considering the author is a nun, as well as the fact that A Match for Mary Bennet was highly religious, but I was more easily able to over look it in the case of that novel due to the main character's established spirituality. The problem here is that not only is religion presented far more overtly than it is in Austen, but also it is of a decidedly Catholic nature, which feels very much out of sync with an early 19th century English setting. Now I'm married to a Catholic, and I have absolutely no issue with Catholic literature, but it just doesn't work with Austen. The book would have been vastly improved if Ms. Ward had suppressed the urge to inject her own religious beliefs into the story and kept such references within the scope of Austen's purview. The fact that the novel also covers content of a decidedly unsavory nature makes the injection of religion all the more jarring.

All this being said, I did find the book enjoyable. I like the notion of exploring Margaret's story and found her depiction compelling. I just think that the book would have been far more effective if significantly cut and cropped and edited for historical accuracy. Perhaps if I had never read and adored A Match for Mary Bennet, freeing myself from having to contend with disappointed expectations in Rifts and Restorations, I would have found the novel more satisfying.