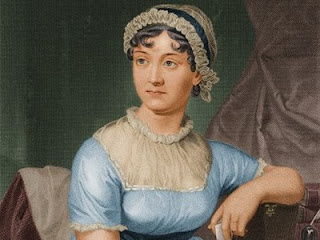 So today should be a Janeicillin day, and while I am anxious to explore all the ins and outs of Eleanor's romance, my head just isn't in it. I found out this morning that I have gestational diabetes, in spite of the fact that I have always been a healthy weight, exercise regularly (obsessively some would say), and eat precisely the way I am supposed to. Frankly, I am in shock, on top of being terrified of all the possible repercussions. While I have every intention of doing precisely as the doctor directs, and the knowledge that I know several people who were similarly diagnosed and have perfectly healthy children is reassuring, the notion of glucose testing is causing me to panic. I have always been terrible about any kind of blood letting, no matter how minute, ever since I accidentally got into my Dad's lithium when I was three and had to have my blood monitored for two days (they can't pump your stomach in such a case as lithium goes directly to your blood stream). I never had a blood test since that I wasn't sedated for, until pregnancy prevented me from relying on such methods. I do feel like I've gotten pretty good at keeping myself calm through the myriads of tests that they give you when pregnant, but having to do the testing myself is a whole different story. I need to find a way to brace myself for this, so that I can prick my finger multiple times a day without fainting, and of course I turn to Jane Austen for assistance.

Quite frankly, any medical treatment, no matter how irrationally afraid I might be of it, pales in comparison to what Jane Austen had to endure at the end of her life. It is not my intention today to recount the many different posthumous diagnoses out there, but just to focus on the spirit and bravery that allowed Miss Austen to face her painful decline and eventual death. I should be rejoicing in the blessings of modern medicine, a science that can pinpoint the amount of insulin my body is producing and compensate for it, rather than sitting here crying over a silly little pin prick. It is my hope that by putting my situation in this perspective, I can scold myself into rationality.

Several of my recent readings have been stark reminders of the blessings of modern medicine. Last week I reviewed Dearest Cousin Jane by Jill Pitkeathley (read the post here), a book that emphasizes the astounding serenity with which both Jane's cousin Eliza and her mother, Philly, faced breast cancer, suggesting that their behavior inspired Austen when she too was confronted with illness. And just yesterday I reviewed David M. Shapard's The Annotated Persuasion (read that post here), focusing in on the character of Nurse Rooke and the lack of resources available to those in pain and medical need at the time. All this makes me reflect upon Sanditon and the remarkable humor which or dear authoress was able to display regarding medicine while on her death bed, in particular her depiction of the hypochondriac Parker sisters, Diana and Susan. A line in a letter from Diana, describing Susan's recent treatments, particularly comes to mind:


She has been suffering much from the headache, and six leeches a day for ten days together relieved her so little that we thought it right to change our measures, - and being convinced on examination that much of the evil lay in her gum, I persuaded her to attack the disorder there. She has accordingly had three teeth drawn, and is decidedly better, but her nerves are a good deal deranged.

And the notion of glucose testing sends me into a panic! What I weakling I am! Instead of succumbing to all this fear, I will do my best to count my blessings. I will give birth in a sanitary environment, with no concerns for the "childbed fever" that used to kill so many (including Edward Austen-Knight's wife, Elizabeth). If the gestational diabetes does cause the baby to grow too big and a cesarean proves necessary, there is virtually no risk of complication (during the Regency is was basically a death sentence). I have great doctors who thoroughly understand this complication and will treat it accordingly, minimizing the risks it poses. So much to be thankful for! If dear Jane were here, she certainly would mock my worries. Keeping her in mind will hopefully keep me rational. Perhaps Janeicillin (the name of which itself feels taunting at the moment) will help!