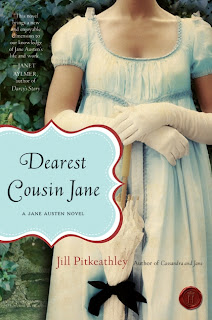 I ordered a copy of Dearest Cousin Jane book, despite the ire that Jill Pitkeathley's earlier book, Cassandra and Jane (read my review here), roused in me, because I could not resist the notion of a novel primarily focused upon that infinitely fascinating actor in all Austen biographies, Eliza Hancock de Feuillide Austen. This glamorous cousin and later sister-in-law of Jane's must intrigue any who read her biographies. As Lady Pitkeathkey (as in my previous review of her work, I cannot deny myself the pleasure of using her formal title) succinctly summarizes in the Afterward, which begins with emphasizing the limited scope of Austen's life experiences:


[Jane's] first cousin Eliza, by contrast, led a most eventful life. Born in India , quite possibly the illegitimate daughter of the great Warren Hastings, who stood trial for treason, she frequented the Frech court of King Louis XVI and Queen Marie Antoinette before the Revolution, married a French Comte wo was executed in the Reign of Terror, escaped capture herself by the mob on two occasions, mixed with the cream of London society, was a brilliant hostess, and eventually married Jane's favorite brother before dying of breast cancer before she was fifty.

Such a story cannot but fascinate, and I am pleased to say that I found this latest novel far more satisfying than its predecessor. It is told largely in a diary-esque format, switching from one teller's perspective to the next, and supplemented by both fictional letters and excerpt from real correspondence. The most prominent voices represented are those of Eliza, Jane, their cousin Philly Walter, Mary Lloyd Austen, and Henry Austen, though many members of the family are given the opportunity to express their perspectives. I was particularly amused by Lady Pitkeathley's projecting upon Philly a temperament akin to Aunt Norris', a similarity she has Jane herself acknowledge (in speaking of the planned cast of Mansfield Park, she says, "one is so crotchety as to put us all in mind of cousin Philly"), and casting Mary as a cross between Mary Musgrove ("It is always my luck to miss out whenever anything pleasant is occurring") and Fanny Dashwood. These likenesses are a bit bizarre in light of the fact that, throughout the novel, Jane denies drawing characters from real life, but I find I can be lenient with this inconsistency.

Just like Lady Pitkeathley's previous book, this book cannot be taken as strict biography, but I found its fictionalizing of historical fact far less troubling than I did in the that earlier attempt, even though Jane and Cassandra's characters are clearly premised upon the former representation. I believe this is due to the fact that the story stays within the confines of Eliza's lifespan and remains largely focused upon her. There is just far less personal attachment and preconceived notions to be offended in regards to this character than there was with Cassandra, from whose perspective Cassandra and Jane was written. Furthermore, Lady Pitkeathley's focus on Eliza as a major influence upon Jane is not only believable, but also an idea easily supported by the biographical information that exists. She paints an endearing and sympathetic portrait of this fascinating character, and I am happy to be able to warmly recommend it to all Janeites.

One last thought. In my review of Cassandra and Jane I expounded upon my frustration that Lady Pitkeathley seemed to express in that book opinions disparaging to writers of JAFF. While nothing in the text of Dearest Cousin Jane similarly offended me, there was one statement in the Afterward that hinted at a similarly dismissive attitude. It is, in fact, the sentence immediately preceeding the one I quoted at the beginning of this post:


Yet from that limited experience [Austen] wrote six almost perfect novels that are world famous, constantly analysed, always at the top of any favourite novel list, and that provide endless material not only for academic study but for popular films and television adaptation.

I only mention it because of the noticeable absence, in this list of "endless material", of fiction writers, amongst whom I would readily rank Lady Pitkeathley. Clearly she continues to consider her pursuits academic rather than this apparently sad thing we lesser writers engage in called fan fiction. Such sentiments make me feel like the recipient of one of Lady Catherine's sincere and frank set downs, and having declared so much, like Elizabeth Bennet, I have nothing further to say.
Posted by Alexa Adams at 7:00 AM