The Watsons by Jane Austen and Another Lady by Helen Baker 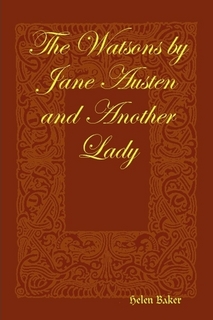 It is in my long term plans to read all of Helen Baker's Austen continuations, and this relatively unknown writer has been prolific in the genre, ever since I was charmed by her continuation of Sanditon, entitled The Brothers by Jane Austen and Another Lady (read my review here). It seemed logical to proceed next to her continuation of The Watsons, especially as the only other attempt at finishing it that I have read, by Joan Aiken, I found rather unsatisfying (read my thoughts on that work here). The Watsons is a troubling fragment, the only work we have from Austen dating from her time in residence at Bath, as it is far more melancholy than her other novels. While retaining the author's distinctive tone, her usual sparkling wit is extremely muted. Unlike a later Emma, Miss Woodhouse, the circumstances in which Emma Watson finds herself are thoroughly melancholy, and in Ms. Aiken's version, they only become more intensely so. Perhaps my favorite aspect of this completion by Ms. Baker is the fact that she finds a way to rescue Emma, as well as the rest of the family, from her extreme difficulties, providing a satisfyingly happy ending to Austen's starkly dire beginning. The means by which this is accomplished is a bit sordid, relying on the controversial topic of bigamy, but as this is the only aspect in which the text strays from what I would consider appropriately Austeninian topics, I found it did not hinder my overall enjoyment of the piece.

Ms. Baker begins her story before Austen commenced, detailing the circumstances in which Emma's Aunt and longtime guardian, Mrs. Turner, looses her husband and then falls in love with the problematic Captain O'Brien, the event that results in Emma being thrust back into the bosom of her struggling family, whom she has not seen since a very young age. This is where she turns to Austen's fragment, complete and unaltered, before continuing on to finish the tale. The insertion is done very seamlessly, and I had to refer back to my copy of The Watsons to confirm where Austen ended and Ms. Baker began. She must be commended not only for capturing Austen's tone so well, but also for remaining true to the original characterizations. My one complaint in this matter is that the gentleman set up at the rogue of the piece, one Tom Musgrave, while remaining meddlesome and an overall bother, does not live up to his potential as a heart breaker. I would have liked to see him more thoroughly discredited. However, perhaps the fact that the scenario in which our heroine is placed in is already so fraught with dramatic tension made Ms. Baker decide that a thorough rogue was unneeded.

There are two choices which Austen presented as potential heroes: Lord Osborne and his former tutor and local clergy man, Mr. Howard. I very much approve of the choice between the two that Ms. Baker made. On the other hand, the manner in which she directs Elizabeth, the eldest Watson sister's, heart I felt was not supported by Austen's beginning. I would, in general, have liked to have seen more done with Elizabeth, by far the most pleasant and companionable of Emma's sisters. She deserves a more decided and prosperous fate. Also, while the fates of the characters decidedly improve in Ms. Baker's hands, the tone of the story retains the melancholia with which Austen commenced. I would love to see someone finish this story in a manner that brings it in line with Austen's other works, allowing it to not only entertain and instruct, but also amuse. Perhaps one day I will take a stab at it myself.

I very much look forward to reading the rest of Ms. Baker's books, which include The Book of Ruth (a Pride and Prejudice sequel), Connivance (a Persuasion sequel focused on Mrs. Clay), Precipitation: A Continuation of Miss Jane Austen's Pride and Prejudice (this one focuses on Miss Bingley), Playfulness (a Mansfield Park sequel focused on Miss Crawford), and Miss Jane Austen's Lady Susan: Revived. She has also written a variety of other books, all of which can be purchased in both paperback and pdf format from her Lulu.com storefront. Ms. Baker has agreed to do an interview with me, though I am waiting to read more of her novels before composing my questions. I urge everyone to read Ms. Baker's sadly overlooked books. They deserve far more attention than they have yet received.
Posted by Alexa Adams at 11:40 AM