The Pemberley Chronicles: The Legacy of Pemberley by Rebecca Ann Collins 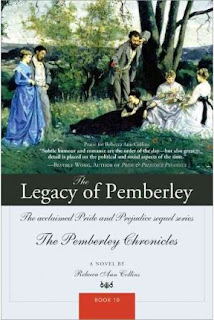 And so ends The Pemberley Chronicles. Rebecca Ann Collins has brought at least 50 years beyond the end of Pride and Prejudice, creating three generations of descendants for Austen's characters. Those who have read my previous posts on this epic sequel (an overview of books one through six and reviews of Postscript from Pemberley, Recollections of Rosings, and A Woman of Influence) will know that I have been in some dread of this final installment, The Legacy of Pemberley, for after watching the majority of our original cast die off one by one, I was certain that the series would end with the death of at least one or both of the Darcys. You can imagine my relief in discovering that this fear was unfounded. I have to imagine that Ms. Collins did not have the heart to write of such a terrible event. Instead, she wraps up her account by bringing the tale back to Derbyshire and the affairs of the residents in and around Pemberley, providing a vision of stability and continuance for the future.

The book is split into three parts, and each could almost stand as a mini versions of Ms. Collins previous novels, as they focus on the development of one or two romances. Part one is entitled Emily's Children (as in Emily Courtney, youngest daughter of Mr. and Mrs. Gardiner) and focuses on the marriage of her youngest son, Jude, and the ongoing disharmony between the core family and Robert Gardiner (Emily's brother) and his wife Rose (daughter of James Fitzwilliam, Colonel Fitzwilliam's older brother). Robert has long been something of the black sheep of the Gardiner clan, being by far the least morally grounded. In the hands of his spoiled wife, who bullies him, he has estranged himself quite forcefully from the Darcys, particularly following the blatant resentment the couple displayed when the Gardiners' business was left to his sister Caroline Fitzwilliam's control, rather than his, and the family estate at Oakleigh Manor went to Emily. Ever since, Robert and Rose have connived to get their hands of Oakleigh, and with Emily ailing and poor, having expended the entirety of her inheritance on charitable causes, and Jude engaged to marry the Teresa Mancini, the granddaughter of the flower merchant who leases a section of the land at Oakleigh, they attempt to take advantage of the Courtneys vulnerability. Robert, however, when fully confronted with the duplicity his wife is willing to stoop to, attempts to assert himself for the first time in years, and while it is enough to garner some sympathy for him from the family, it is not sufficient to restore happiness to his troubled marriage, especially when the actions of his spoiled daughter, Miranda, further complicate matters. This section of the book also accounts for the long absent William Courtney, whose musical talent has taken him far from the lives of those at Pemberley, wrapping up his story and accounting for his long absence, while also touching on the fate of Eliza Harwood, Emily's oldest daughter. Her forth child, Jessica, has had a more prominent role than her siblings in recent books, having married Julian Darcy and established herself at Pemberley.

Part two is entitled Solitary Lives, and its topic is the fate of of two ladies who have been intricate to this story - Georgiana Grantley (nee Darcy) and Caroline Fitzwilliam (who married the Colonel) - following the lose of their husbands. Both have one unmarried daughter left on their hands: the spoiled and self-centered Virginia Grantley, and the sacrificing and modest Rachel Fitzwilliam. These ladies are in their late twenties, and while Georgiana evinces great concern over her daughter's single fate, having lived her own  life dependent on first her brother and than her husband, Caroline is happy to still have Rachel's companionship and to let her find her own path. Georgiana's concern is exacerbated by the fact that Virginia's presence at Pemberley, where she and her mother have relocated, has created great disharmony. In an attempt to alleviate the situation, Caroline invites Virginia to stay with her at Matlock. It is there that two new gentleman, fresh from Australia, come into their lives. First there is the arrival of Daniel Faulkner (the son of Maria Faulkner, nee Lucas, and brother of Anna Bingley, who is married to Jane's oldest son) after having been away from England for twenty years. Soon he is followed by his friend, a Mr. Adam Frasier. Both gentleman will have a lasting impact of the young ladies at Matlock and their mothers.

The final part is called The Inheritance. While its title does not fit its subject matter as the precisely as those of the previous parts of the novel, it is apt in that it demonstrates the ability of those who will inherit Pemberley and the surrounding estates to carry on the Darcy's legacy. They are called upon to rise to the occasion after Mr. Bingley is told to travel to the Mediterranean to restore his ailing health, and Mr. and Mrs. Darcy decide to accompany him and Jane. The section focuses on Laura Ann Gardiner, daughter of Robert and Cassandra (the brother of Caroline, Emily, and Robert and the daughter of Darcy and Elizabeth). Her romance begins to bloom when a new family moves into a long vacant farm adjoining Darcy and Kate Gardiner's property (Darcy is Laura Ann's oldest brother and the manager of Pemberley). Newly arrived from Ireland, the O'Conner's are not a well off family, but the widowed mother, her son, Tom, and her two daughters quickly become friends with this branch of the Gardiner family. But when a wealthy industrialist moves into the area and begins trying to buy up properties for development through crooked means, including the O'Conner's farm, the families in and around Pemberley must act fast to preserve the tranquility and prosperity of Derbyshire, and for the first time, Mr. Darcy isn't there to advise them. Now is the time to see how well the succeeding generation has been equipped to step into their elders' august shoes.

Like all of Ms. Collins books, this novel provides a very pleasant sojourn in the world that Austen inspired, but I think I am a bit relieved to know that the series has come to an end. For one thing, it is trying to keep up with the tangle of relationships she has created between the descendants of the Darcys, Bingleys, Fitzwilliams, Gardiners, and Lucases. I have often considered trying to make a family tree, but with so may cousins intermarried, the thing is a complete hodgepodge. Secondly, I often find Ms. Collins' prose boring, as she tends to be very repetitive (I lost count of how many times in this volume she had a character reflect, in a revelatory manner, on Georgiana Grantley's dependent state). However, this series does what no other has in providing a real glimpse into what changes and developments the Victorian Era might bring to Austen's beloved characters. Ms. Collins develops the generations that follow in depth, all without relying on sexual content and overly dramatic happenings to fuel her plot. I might very well reread the series one day, when I am craving the safety and comfort it provides, as it is entirely free of subject matter that would make the original authoress blush. The one area that Ms. Collins strays into that Austen never touches upon are the political and industrial developments of the period, as well as their effects of the poor and wealthy alike, but as this is what I find most interesting in her stories, I have no complaints about it. Would Austen have agreed that her creations would prove to be such reformers? I have no idea, but my modern values approve of the notion. I recommend this series to any who are looking for a long and detailed account of the future of Pemberley without the graphic content that defines so many Pride and Prejudice sequels.
Posted by Alexa Adams at 12:40 PM