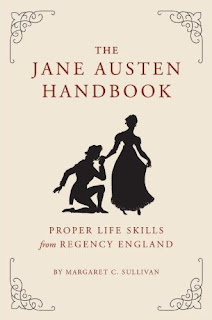 I have been terribly remiss in neglecting to review The Jane Austen Handbook: Proper Life Skills from Regency England by Margaret C. Sullivan (editrix of the fabulous AustenBlog) for so long, which the good people at Quirk Books were so kind as to send me, but life has become rather complex as my pregnancy nears its end (so tired!). I have also been slow to read the book, as I have not sat down and just consumed it from cover to cover, as I usually do with the books I review, but meandered through it instead, reading bits and pieces here and there. Often I have picked it up as I write, either because it might confirm an historical quandry I have, or as a means of combating writer's block. This is actually the same manner in which used the first edition of the book which, until its successor arrived, had a permanent place on my desk. For example, there is a scene in the novel I am currently working on which sets Lady Catherine up as a matchmaker, so upon hitting a part in the dialogue in which I was stumped as to how to move forward, I opened up my trusty Jane Austen Handbook and turned to the section entitled "How to Marry Off Your Daughter", where I was treated to twelve handy tips on making a match for eligible young ladies. Not only did this prove to be the perfect means of rekindling the creative juices, but I was further delighted by the short section that followed, "Is Mrs. Bennet the Hero of Pride and Prejudice?" The book is filled with delightful deviations such as this one, in which Ms. Sullivan explores different aspects of Austen's works, as opposed to the more strictly cultural/social information that makes up its bulk. I particularly enjoyed the list of Austen's sickly ladies in "Hypochondriacs in Jane Austen's Novels" and a similar delineation of the "Worst (and Funniest) Proposals in Jane Austen's Novels".

But this book is in no way geared to those, like myself, who write about, live for, and hungrily devour all things Austen. I have to imagine that it proves even more useful to those just engaging in Austen's world, or those who have long loved her novels without exploring the cultural realities that inform the stories. For example, have you been wondering why Catherine Morland took a sedan chair home from the assembly rooms in Bath as opposed to a carriage, or why Gretna Green was the destination of choice for an eloping couple and how it differed from a reading the banns? If any of this has puzzled you, you will find The Jane Austen Handbook a very handy tool. Alternatively, maybe you'd like to learn how to engage in the endless needlework and crafts that seem to fill each day for the ladies in Austen's novels. If so, Ms. Sullivan has provided a handy primer on how to engage in netting, as well as full instruction on making a filigree basket. From details on the different types of dress, morning through evening, to inheritance laws, The Jane Austen Handbook proves itself time and time again an invaluable source of information on Regency life. I highly recommend this delightful book to all Janeites. It is truly a must have volume.
Posted by Alexa Adams at 10:43 PM