A Pemberley Medley by Abigail Reynolds 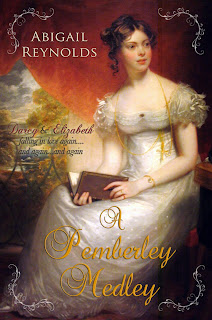 Some of you might be wondering, after a somewhat frantic Facebook update three days ago, if I have had the baby yet or not. Sadly, though I am experiencing contractions, they are not yet strong enough to get this show on the road. So here I am, left in limbo, trying to ignore the discomfort by distracting myself with a little bit of Austenesque. Thankfully, I have a fresh supply of unread books on hand, including Abigail Reynolds' recently published collection of short stories, A Pemberley Medley. This book was exactly what the doctor ordered, to employ a rather apropos cliche. Despite my well documented discomfort with more sexualized portrayals of Austen's characters, I can never get enough of Ms. Reynolds "What if?" tales, my qualms easily overlooked in the face of some of the most delightful reimaginations of Pride and Prejudice that it has been my pleasure to encounter. Her short stories were no exception, and I will briefly describe and respond to each one in this post.

I think the first story, Intermezzo, was my favorite. A classic example of Ms. Reynolds' typical style, this story explores what might have happened if Mr. Darcy sent Mr. Bingley back to Hertforshire after learning of Jane's affections at Hunsford. Because of the disastrous results of his failed proposal, he does not accompany his friend, allowing wedding plans to proceed for the happy couple without his own courtship advancing. As a result of the timing, Lydia never goes to Brighton, and Elizabeth does not again encounter Darcy until the day of her sister's wedding. Fortunately, Georgiana, perceiving that someone in the neighborhood of Netherfield had caused her brother great heartache, proceeds him into the neighborhood in an attempt to locate the lady in question and attempt to rectify whatever problems stand in the way of his happiness.

The reason I said that I think Intermezzo was my favorite story in the collection is because I can't really decide between it and the second tale, Such Differing Reports. Also very much in Ms. Reynolds usual mode, this story takes place at Hunsford and questions what might have happened if Elizabeth had taken to heart Charlotte's intuitions regarding Darcy's affection for her. Instead of making his infamous first proposal, the couple have the opportunity to address the issues which arose during that confrontation in a more diffuse manner, leading up to a letter of a far more romantic nature than the one which Darcy pens in Austen's original tale. Be warned: swooning is highly likely when reading it.

The third story is Reason's Rule, a variation on the course of events in one of my favorite books by Ms. Reynolds, Impulse and Initiative, but you do not need to be familiar with that novel to enjoy this alternative ending. However, because of this fact, the action begins after Darcy and Elizabeth have already come to an understanding and focuses upon Lydia's disappearance from Brighton, Wickham's motives now being attributed to her new relationship with the Darcys. A bit of a spoiler: before entering into negotiations with Wickham, the players all agree to hurry along the betrothed couple's wedding date, so as he cannot use their undetermined state as a bargaining ship. This leads us to the only wedding night scene in this collection.

The Most Natural Thing is our forth tale, and while I entered into it with some reservations, the result of Ms. Reynolds introducing the story as "dating from a time when 'Dark Darcy' stories were popular", a phenomenon which I do not particularly care for, I ended up very much enjoying it. The premise is that, shortly following her departure from Hunsford, Elizabeth's father dies, and when Lydia absconds from Brighton with Wickham, Mr. Collins throws the entire Bennet family out of Longbourn. Feeling that she has few options, Elizabeth presents herself at Darcy's door in London, offering herself to him as a mistress in return for his interference with Mr. Collins on her family's behalf. A bit of a disturbing start, and definitely in that "Dark Darcy" mode, but I love the way he responds, confirming all the best attributes Darcy possesses rather than diminishing his character to that of a rogue.

Finally we have A Succession of Rain, a thoroughly sweet story that follows what would have happened if inclement weather prevented Darcy and Elizabeth from taking that detrimental walk, after Lady Catherine's visit to Longbourn, during which they reach an understanding. Those who have read my novel will understand my desire to see everything work out for the couple with relatively little angst and impediment, and Ms. Reynolds definitely caters to that urge in this tale.

All in all, I think this book is a necessary addition to every Austenites library. Sometimes we need quick reads, when life deprives us of an extended attention span, and this collection perfectly fits the bill. I could not be more thankful for its extremely timely arrival in my life.
Posted by Alexa Adams at 10:38 AM

Labels: Pride and Prejudice, Reviews, Short Stories, What If?