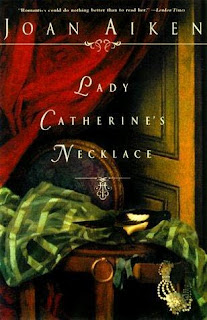 With Lady Catherine's Necklace, I have now read the entirety of Joan Aiken's Austenesque offerings, and with this post, I can finally put aside the love/hate relationship I have for this author (for an explanation of these mixed emotions and more information on Ms. Aiken's other books, please check out this post). I certainly enjoyed this novel more than most of her novels, particularly as it did not contain so many of those dark and sinister elements she has a penchant for including, but her willingness to disregard essential elements of Austen's original plot continues to irk me (more on some aspects of this later). Overall, I found this to be a quick and surprisingly pleasant sequel, and I sincerely lament the fact that it is out of print. It is far more worthy of republishing than some of the other novels of Ms. Aiken's that have been so favored.

The plot of this book, which places Anne de Bourgh and Maria Lucas front and center, is instigated when the carriage of two charming strangers, Miss Priscilla Delaval and Mr. Ralph Delaval, suffer an accident in front of Rosings Hall, forcing the siblings to seek the hospitality of the always formidable Lady Catherine de Bourgh. Their arrival coincides with the death of Mr. Bennet (whose wife has already died and daughters are all established), Mr. Collins' departure for Longbourn in order to attend to affairs, and Charlotte Collins' third lying in. Maria has already arrived to assist her sister at this time, so Mr. Collins' loss, especially when Mr. Delaval (who proves to be ordained) steps forward to deliver sermons in his place, is not mourned by any. Soon the company at Rosings is further enhanced by the arrival of Colonel Fitzwilliam and a new relative invented by Ms. Aiken, one Lord Luke Sherbine. Lord Luke is said to be a second brother of Lady Catherine's (a third also plays a background role in the plot), and while I find it irritating that Ms. Aiken is so willing to alter the biography of Austen's characters, I can't help but admit that Lord Luke was one of my favorite aspects of this book. Wildly eccentric and determined to undermine his dictatorial sister's authority, even when this requires employing rather despicable means, it is to Lord Luke that we owe many of the book's most humorous moments, like the following:


"The earliest hangman whose name survives was called Bull. Is not that interesting?" said Lord Luke. "One asks oneself if it is because of him that the English have adopted John Bull as their national figure. The most famous hangman, of course, was Jack Ketch, who executed Lord Russell and the Duke of Monmouth."

"Will you please quit this disagreeable topic, Lucius," snapped Lady Catherine. "Heaven knows that I have enough to concern my mind without your --"

"A hangman's wage," her brother pursued, wholly ignoring Lady Catherine's interruption, "was thirteen pence and a halfpenny - with another three halfpence for the rope. I daresay it is considerably more nowadays. Nobles, of course, were expected to remunerate the executioner with seven to ten pounds for cutting off their heads. That, to me, seems unfair. Why should I be expected to lay out such a sum for such a dismal service?"

"I daresay you would be glad enough to do so when it came to the point, Uncle Luke," said Anne de Bourgh, rousing herself from a gloomy abstraction. "Hanging seems to be such a chancy process."

This episode also wonderfully illustrates the manner in which Anne begins to emerge from her shell in this story. While I cringe at Ms. Aiken's decision to make Anne only 19 years old, which would have made her fifteen at the most when Pride and Prejudice takes place, I do like how she begins to thwart her mother's dominance, assert herself, and pursue interests of her own, a development assisted by her friendships with two gentlemen artists who live on the estate (the nature of whose relationship I will not deign to question), and with a young gardener on the estate, Joss. Unfortunately, in order for her plot to develop, Anne's well-established ill-heath is completely disregarded.

Maria also adds an interesting dynamic to the story. She returns to Hunsford having developed something of a romance with Colonel Fitzwilliam the previous year, but now he is engaged to Anne and all three must cope with the ill-effects of this mismatch. I find it disconcerting that the gentleman's character suffers as a result/ Maria has also, somehow, come under the patronage of Mrs. Jennings of Sense and Sensibility, with whom she has stayed with in London and maintains a regular correspondence. While Ms. Aiken paints Miss Jennings in a far less matchmaking light than Austen did, I found her influence on the story both interesting and agreeable, even if the end result of it is extremely far-fetched.

The novel hinges on a mystery surrounding the seeming disappearance of not only Lady Catherine's diamond necklace, but the lady herself. I do not want to spoil the plot and so will say no more on that point, except to declare that the result is one of the more sympathetic portraits of Darcy's officious aunt that anyone has written (with one notable exception being myself). I enjoyed this book for what it is: a fun lark into the world of Austen's Kentish creations. If you enjoyed Ms. Aiken's other books, than this is one that should definitely be pursued.
Posted by Alexa Adams at 7:11 AM