Fashion in the Time of Jane Austen by Sarah Jane Downing 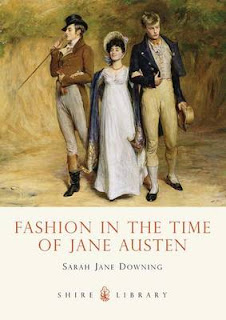 I read this book in a little over an hour last week. It is a Shire Library publication, a press known for their slim volumes exploring niche topics. Fashion in the Time of Jane Austen is a useful overview of the politics and technologies that influenced fashion during the Regency. Beautiful images throughout make it both a charming read and useful resource.

I am fairly familiar with this topic (though by no means an expert), so there wasn't much in this book that was new to me. However, any discussion of the radical shift in fashion between the Georgian Era and the Regency always fascinates me. While Ms. Downing discusses the role of the French Revolution in popularizing classical style, she puts less emphasis on it than most books I have read on the subject, focusing instead on the pivotal role of industrialization in the "battle between broadcloth and silk", as Balzac termed it. Industrialization meant that the lush fabrics popular in the 18th century (like brocades) were now accessible to the rising middle class and could no longer be looked to as a confirmation of the wearer's status. Led by Beau Brummell, perfect tailoring replaced luxurious fabrics as a sign of sophistication:


Cut and fit were everything, creating a codified language for those in the know. Brummell's credo was, 'If John Bull turns to look after you, you are not well dressed'. wealth was whispered in the skill of the tailor, not precious fabrics, and class was implied by the hauteur given by a correctly tied cravat that held the head high causing movement to be limited and precise. 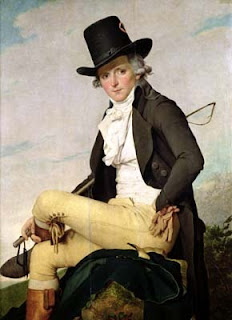 Woman's fashions followed a slightly different course, though the availability of mass produced muslin was certainly key to the popularity of that ubiquitous material. In a fascinating chapter entitled "Rousseau and Fashion Au Naturel", Ms. Downing traces the effects of Rousseau's Emile and its romanticization of childhood and espousal of freedom on fashions in the late 18th/early 19th centuries. She begins by showing the effects of this philosophical shift on children's attire, creating for the first time distinct children wear, and goes on to compare the noticeable differences between boy's clothes and menswear, while girl's and women dressed almost identically:


[Girls] were not emancipated from their infant frocks into adulthood through an equivalent to 'breaching' because they were never expected to be emancipated at all - not even by Rousseau. He had almost completely neglected women in his philosophies, and they are the only group for whom he does not advocate freedom.

Amidst all this social theory, Ms. Downing provides details on all manner of male and female dress, from the evolution of top boots and tails to the many functions of the reticule, muff, and parasol. I highly recommend this book to anyone requiring a brief and accessible guide to the fashions of the era as well as to seasoned enthusiasts, who will appreciate the perspective provided when fashion and social developments are explored in tandem. It is a lovely little book which I intend to keep on my desk as a quick reference point for the questions I often find myself asking as I write, such as what color stockings would Miss Darcy wear or were Mr. Darcy's boots "straights". One can never know when such tidbits will make or break the authenticity of a scene.