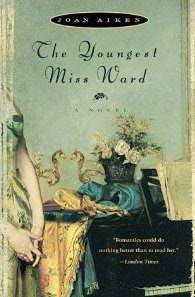 It has been a few years since I read a Joan Aiken book, which I why I have never previously commented on this blog about her work. Her novels were amongst the first I discovered when I started reading JAFF as she was very prolific, writing six Austen sequels. She deserves recognition as a I pioneer of the genre, and for her part in popularizing Austenesque and proving its profitability to the publishing industry I am eternally thankful. That being said, I do not love her novels. They have a sinister quality to them - wholly absent in Austen - that taints my ability to enjoy them. The Youngest Miss Ward is my fifth Aiken book. Before proceeding to my thoughts on it, I would like to comment on her other novels, in the order that I read them.

The Watsons and Emma Watson was my second JAFF ever. I had just finished reading the completion of Sanditon by "Another Lady" and yearned for a similar treatment of The Watsons. I mostly recall my disappointment, while the actual details of the story are hazy. I remember Ms. Aiken incorporated many fascinating historical details, including an agonizing trip to a dentist, but the predominant feature of the tale was its misery. Emma Watson is subjected to a series of outlandish degradations, her "happy ending" not ample enough compensation for the reader who has toiled through the plot. Very few of the characters in this story are likable: most are repulsive. I also wish she had done a seamless transition between Austen's work and her own, instead of splitting them into self-contained stories.

After disliking Emma Watson so much, perhaps it is surprising that I went on to read more of Ms. Aiken's novels, but as the book store was my first source for JAFF, the number of writers available was slim. Furthermore, Ms. Aiken had a book entitled Jane Fairfax, and I was itching for Emma retellings. I enjoyed this book far more than Emma Watson but found Ms. Aiken's animosity for Emma Woodhouse extremely disconcerting. The concept of the story from Jane Fairfax's perspective intrigued me enough to seek out another attempt that proved much more to my liking: Lover's Perjuries by Joan Ellen Delman. I had to purchase the book online, thereby opening a new world of reading options (including more Aiken novels) and hugely facilitating my growing JAFF addiction. 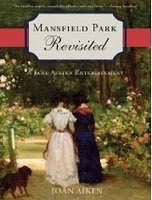 By now I had consumed a respectable sampling of published JAFF, but had yet to read anything pertaining to Austen's most controversial novel. Mansfield Park Revisited is probably my favorite book I have read by Ms. Aiken, despite the fact that Fanny and Edmund are totally absent from the plot (very irksome). Instead this story follows the developing friendship between Susan Price, happily ensconced at Mansfield, and Mary Crawford, who returns to the area as an invalid. Ms. Aiken paints a very sympathetic portrait of Mary, a subject for whom my sympathies cannot be engaged, especially when Fanny is neglected in her favor, but I love how she handles Susan, even though I can't quite like the match she makes for at the end.

Mansfield Park Revisited left me hungry for more of Aiken's work, quite curious to learn where else her fancies had led her. Eliza's Daughter tells the tale of the child born to Colonel Brandon's ward and Willoughby, the third generation of sad Elizas. This book bothers me in so many ways. First of all, we must believe that Colonel Brandon and Marianne would allow the child to grow up neglected and friendless and, secondly, when she encounters Elinor and Edward Ferrars, any hopes devotees of Sense and Sensibility had for happiness in the quarter are shattered by the dejection and poverty that encompasses their lives. Like Emma Watson, this book is an exploration of suffering and not at all to my liking.

After Eliza's Daughter I lost my interest in Ms. Aiken's work. The reason I finally picked up a copy of The Youngest Miss Ward is because I thought it would be about Francis Price, Fanny's mother, which I found irresistibly intriguing. I was wrong. After reading the first chapter and realizing that Ms. Aiken had invented a forth sister, Hatty, I put the book down in disgust and did not open it again for a month. However, I am very glad I picked it up again, in spite of the fact that the book has many of the qualities that I dislike in Ms. Aiken. It makes me resigned to pursuing Ms. Aiken's remaining Austenesque book, Lady Catherine's Necklace, it the not too distant future.

If we deplore the way in which Fanny is treated by Mrs. Norris, it is nothing to what Ms. Aiken subjects poor Hatty to in that same tormentor's hands. United with a formidable cousin, Lady Ursula, Mrs. Norris persecutes Hatty is the most unfeeling manner. Banishing her from her beloved mother when that lady is on her death bed, Hatty is sent to spend several years with her Uncle Ward's family. There she is fortunate to find a friend in both her Aunt Polly and her cousin Ned. She also meets the charming and eccentric Lord Camber who, aside from Lady Ursula and Mrs. Norris, has more direct influence over her life than anyone else she meets, before being unceremoniously thrust from the house due to little fault of her own. Fortunately, Hatty has a backbone, and despite being foisted off on Lady Ursula's family as a governess (which part of the book reminds me acutely of Agnes Grey), she takes control of her life and finds happiness. As with Susan Price in Mansfield Park Revisited, I cannot feel satisfied with the match she makes in the end, but overall I enjoyed the novel.

The sinister quality that I earlier applied to Miss Aiken is apparent in The Youngest Miss Ward, though not as prominent as in some of the other novels. Many of her character's are unjust, dictatorial, and sadistic. Lady Ursula and Mrs. Norris certainly fall into this category, though perhaps it's the former's redemption towards the end that makes this book more palatable than some of her others. Ms. Aiken frequently gives her characters handicaps (for example, Eliza in Eliza's Daughter has six fingers on each hand) thereby increasing the feeling of instability in the worlds she portrays. This feature of her work is particularly apparent in The Youngest Miss Ward, which features two eerie twin cousins, "forlorn and listless", who would probably be quite normal if nursed less, and Lady Ursula's sisters, the elder of whom is a kleptomaniac with a lazy eye, while her younger sister is a musical idiot savant. Yet through it all Hatty remains unbroken and undaunted. A poet, it is in one of her dreariest times that she composes this little witticism:


He
Throws the ball to me
But I
throw it to him. Why?
I and Me, Him and He
What a fuss
when there are only two of us!

I don't know if it is Hatty's resilience that allows me to enjoy this book so much more than some of Ms. Aiken's others, or if it is the fact that her villainous characters are less effective in their persecution here than elsewhere. Perhaps my ever fluctuating mood has more to do with my response to her books than anything else. Regardless, anyone exploring JAFF will come across Ms. Aiken and, whether her work tickles your fancy or not, it is undeniable that she set many of the standards and conventions of the genre. I just wish she were more light, bright, and sparkling. If I wanted toil and hardship, I'd turn to the Brontes.
Posted by Alexa Adams at 3:14 PM