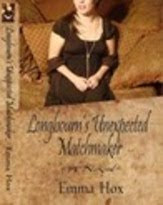 Longbourn's Unexpected Matchmaker is a "What If?" tale whose premise is remarkably like my own, in that Darcy and Elizabeth get off to a much more promising start, dancing together at the Meryton Assembly. Here is where the similarity ends (other than the fact that both stories, of course, end in the couple finding happiness together). Emma Hox uses two characters to help facilitate their understanding: Colonel Fitzwilliam, who accompanies Darcy and Bingley to Netherfield, and Mr. Bennet, the "unexpected matchmaker" of the tale.

The story is really one of redemption for Mr. Bennet who, in Pride and Prejudice, though a loving father, neglects his family as a means of securing his own, rather selfish, comfort. Some "What If?" stories (Chance Encounters by Linda Wells most notably) expand on his shortcomings almost to the point of villanizing the man, something I always perceived as a bit unjust. There is nothing in the original text to suggest that Mr. Bennet is malicious, just indolent. Ms. Hox makes clear her intentions for the novel on the back cover of the book, "Emma has for a long time been disappointed in Mr. Bennet. Longbourn's Unexpected Matchmaker gives Mr. Bennet the personality Emma always envisioned the witty father of Elizabeth Bennet should truly have."

The concept is fun and the book is a fast, entertaining read, but I must admit to being rather frustrated with this story. There is a lack of adherence to the details of the original text that I find aggravating. Some of this might be editing mistakes, of which there are a multitude, like calling Mrs. Hurst Louise instead of Louisa, but they nonetheless interfered with my enjoyment of the story. Also, while Ms. Hox goes to great lengths to redeem Mr. Bennet, through rather far fetched means, she punishes Lady Catherine in a manner I find completely unbelievable and rather outrageous. And I ask you, fellow Austenites, would Mr. Darcy ever use the expression "amen to that, brother"? He does so twice in the course of this text.

Despite my qualms, I must say I highly approve of Ms. Hox's tasteful handling of Darcy and Lizzy's relationship, by which I mean there are no invasions of their privacy: no explicit depictions of amorous encounters. I also found her characterization of Elizabeth as a tree climber rather fascinating - certainly an unorthodox pastime for a lady of the time but rather charming nonetheless. Georgiana is far more daring and adventurous than usually portrayed, which is fun, and Anne De Bourgh is given the opportunity to shine in a manner usually denied her. If you are, like me, addicted to the "What If?" concept, then this book is an appropriate addition to your JAFF library. On the other hand, if you are an Austen purist, I think this novel will likely be the source of more spleen than joy.
Posted by Alexa Adams at 3:44 PM