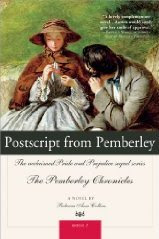 Spoiler alert, explained in the first paragraph before being revealed.

Book Seven of The Pemberley Chronicles, entitled Postscript from Pemberley, chronicles the romantic lives of Jessica Courtney and Darcy Gardiner. Now before proceeding, let us stop a moment and figure out who these people are in this world that Rebecca Ann Collins has created. Jessica is the daughter of Emily Gardiner, daughter of Mr. & Mrs. Gardiner, and James Courtney, Rector of Kympton. Darcy Gardiner is the son of Cassandra Darcy, daughter of Elizabeth Bennet and Fitzwilliam Darcy, and Dr. Richard Gardiner, son of Mr. & Mrs. Gardiner, brother to Emily. That makes Jessica and Darcy both first cousins and some other kind of cousin, rather far removed, Jessica being his grandmother's second cousin. In a moment I intend to reveal who they fall for, as the back of the book reveals Darcy's amore and the prologue reveals Jessica's (I really can't feel overly guilty about this, though I do usually try not to give away a story - be assured there are much more intriguing aspects of the book that I do not spoil).

Something I liked particularly about Postscript from Pemberley is the strong presence of our original Lizzy and Darcy, who sometimes get lost in these stories, the romances of Jessica and young Darcy bringing more happiness to Pemberley than it has seen in a long time. Over the years many tragedies have darkened the Darcys' lives, but the events of this book bring new love and stability to those they care for most. For sometime they have been exceedingly anxious for their son Julian Darcy, who lost his wife under very tragic circumstances and abdicated his inheritance in favor of his son from that marriage, Anthony Darcy. The burden of Pemberley has fallen on Darcy Gardiner, now manager of the estate and mentor to the young heir. Darcy amiably fulfills his duties - he is a thoroughly capable man - but his political interests threaten to call him away to a life in London. Though it is never explicitly mentioned, his first name indicates that he belongs to his heritage - it designates him keeper of the traditions and way of life Pemberley represents. This is where he belongs and it is in Kathryn O'Hare, the new school teacher, that he finds the self-recognition to remain close to his ancestral lands.

While Darcy and Kathryn are securing Pemberley's prosperity, Julian Darcy finds the woman most truly suited for him in Jessica Courtney, who resides at Pemberley while running the local school. We particularly see Mrs. Darcy's pleasure in her son's second love, which Julian and Jessica keep secret until he returns from a scientific exploration of Africa. Elizabeth sees them embrace upon Julian's return, just in time for Christmas:

Looking down from her favorite window, Mrs Darcy saw them too and smiled. Clearly she had not been mistaken in thinking that the regular correspondence she had noticed between her son and Jessica was a sign of something more than a mutual interest in his research into tropical disease! How much she had guessed, she would not immediately reveal, but she was certainly not displeased with what she saw.

Later that evening, on the topic of Julian and Jessica's secret engagement:

Kathryn, noting Mrs Darcy's smile, realised that they had probably not been entirely successful after all, but it did not signify, since Elizabeth was so obviously delighted with the outcome. Indeed, Mrs Grantham confided to Kathryn that she had not seen her mistress look so happy in a long while.

It pleases me greatly to see Lizzy so content. Though life's little troubles will intrude - rude cousins, political unrest, a judgmental world, and a horrid sister named Lydia (who finds herself rather comically thwarted - how mischievous of you Lizzy!) - the Darcys have risen above such pettiness. They have been transformed from the young lovers of Pride & Prejudice into idealized Victorian monarchs: the benevolent and prosperous rulers of their little slice of England. Mr. Darcy is most dazzling in his period rectitude, as demonstrated in his thoughts regarding Julian and Jessica's desire for a small wedding:

Mr Darcy put down his glass and declared that it seemed a very sensible decision.

"I am very glad to hear it, Lizzie; it shows both personal modesty and good sense. I cannot see the point of extravagant wedding parties in these straightened times, not unless one is determined to demonstrate that not only has one more money than one's neighbors, one is also more inclined to fritter it away!"

Elizabeth, who could recall the lavish celebrations of Georgiana Darcy's wedding and their own daughter Cassandra's marriage to Richard Gardiner, wondered at the way Mr Darcy's perception of such matters had altered over the years. Time was when Pemberley set the standard of magnificence on such occasions; it would have been considered a betrayal of the family traditions and its standing in the community to have done less. Clearly, her husband no longer saw it in the same light.

He no longer regarded Pemberley as a symbol of his family's status in the county, and though devoted as ever to the maintenance and preservation of the great estate, it had become more a matter of his responsibility to the entire community, than of pride in himself and his inheritance. It was a change that had come about gradually, over the many years of their marriage and the influence of his partnership with Mr Gardiner.

Here is the force that keeps this saga going - Mr. Darcy is the backbone upon which Ms. Collins' entire world stands. By the end of Postscript from Pemberley, he is strong, the line is assured, and those the Darcys love are flourishing. This is a very happy place to be. I can't help but fear what the future will bring, as mortality is a constant element in this story and Lizzy and Darcy cannot live forever, but as we have three books until the end of the series, I give myself leave to hope that more happiness is in store for these beloved characters.

The next book, Recollections from Rosings, promises to be about Charlotte Collin's oldest daughter, Catherine Harrison, who is married to the Rector of Hunsford, and her daughter Lilly. This might be another backwards looking story, like My Cousin Caroline, filling in blanks instead of providing forward momentum. It also may have less Lizzy and Darcy content, if the action is relegated to Kent. We shall have to wait until March to find out. I will certainly read it. Though this series sometimes drags, it is throughly pleasant to know that nothing untoward will happen. I shall read all of it and, when I am done, read them again back to back, though probably not with any great speed. The Pemberley Chronicles have a soothing effect on me, depicting as they do a world to which I am always happy to return, Ms. Collins' Pemberley being such a thoroughly pleasant place.
Posted by Alexa Adams at 7:00 AM